Street procession for the Birth and Death Gods

On the 3rd night of the Phuket Vegetarian Festival, our local shrine in Kathu village has a small street procession around the village which the schedules tell me is for "Propitiation of the Birth-Death Gods". The last few years I have heard long bursts of firecrackers on this 3rd night, and last year had a quick look to see what was going on. This year, I took the camera! Luckily we arrived early. My schedules said the procession would be 7:30pm, but as we parked the car down a side street just after 7pm, the sound of firecrackers started and we raced out to the main street (not a very busy road) as the procession started to pass. 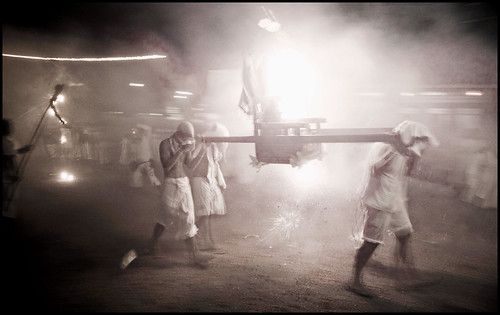 This year during the vegetarian festival I am trying to concentrate a bit less on the blood and pierced faces, though there will be more photos of that later... last years photos (see Phuket Vegetarian Festival 2010 on Flickr) had a good mix. The strange piercings are hard to ignore, but that was not a problem on this warm evening in Kathu - the statues of the gods were carried through the old Kathu village and various Ma Song (the entranced spirit mediums) walked along the streets too. 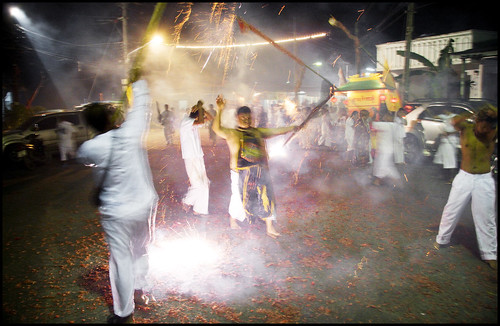 The main focus of the procession - yes, firecrackers. I walked along with my Mum and Dad and found a house with stacks of bamboo poles hung with long lines of firecrackers ready to be dangled over the street at the god statues were carried past. This looks like a good place to stand! Mum and Dad had not experienced quite so many firecrackers before. 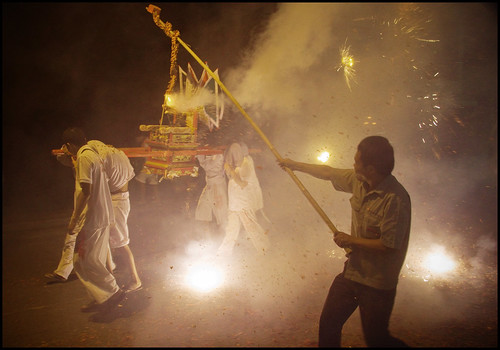 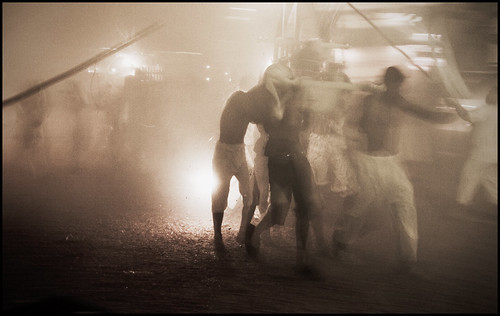 I love this! A bit hard to take a photo - it's dark and the firecrackers flash and bang, it's hard to see what you are looking at, and the smoke creates a .. well, a smokescreen at times that the camera can't see through. It's shoot and hope for photographers and then a bit of photoshop to enhance the image. Often looks better in black and white. I love being right there as the onlookers throw great big packets of fireworks into the street. I love to be right in the middle of it! This was just a small local procession. No tourists here (except me, Mum and Dad!) - we like heading into Kathu, as it's my local shrine, we know quite a few people, and it's always much quieter than the main Phuket Town shrines, but they do know how to set off firecrackers! 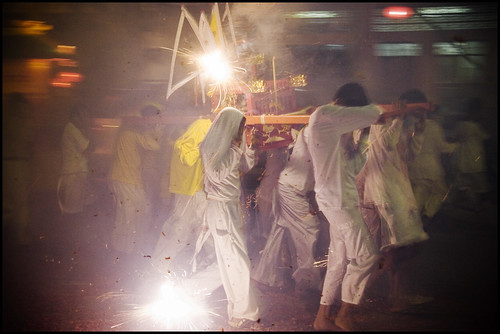 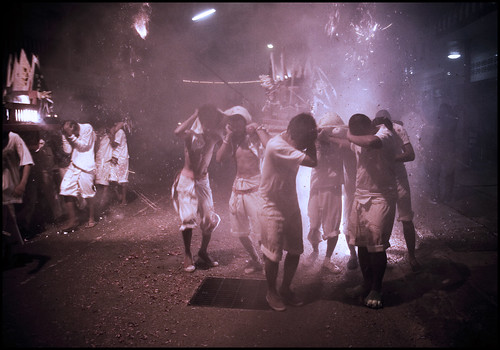 Next blog post will have some pierced faces .. we went to Sam Kong shrine early morning, just after 6am on September 30th for the start of their big procession including face piercing taking place right there in the shrine :)


You have been reading : Street procession for the Birth and Death Gods