Well, that's all done for another year. One of the craziest times of year in Phuket.. come to think of it, certainly the craziest. Some people hate the vegetarian festival or are bored by it, or just moan that the street processions disrupt traffic around Phuket Town. Some people hardly notice the festival, as it really only affects Phuket Town and small communities with a Chinese-Thai background like Kathu, Sapam or Tha Reua. If you sit on the beach at Kata for the duration of the festival, you won't see anything. Personally I love it. Love the old traditions, love the way the local community comes together and maintain these traditions, I love the crazy street processions, love taking photos and I also use the vegetarian festival as an excuse for 10 days of detox. I stick to the diet, drink no alcohol.. although I don't wear white and certainly don't impale myself with sharp objects. Leave that to the real devotees.

This blog post covers the first few days of the festival which started on October 7th in the afternoon with the raising of the Go Teng pole at all the shrines. I went along to Kathu shrine with my family. We managed to dilly and dally and just missed the actual pole raising by a few minutes but did watch as the lanterns were raised up. The lanterns would be lit later that night. It is said that the gods descend into the shrines at midnight. I must try to get to Kathu shrine at midnight sometime! 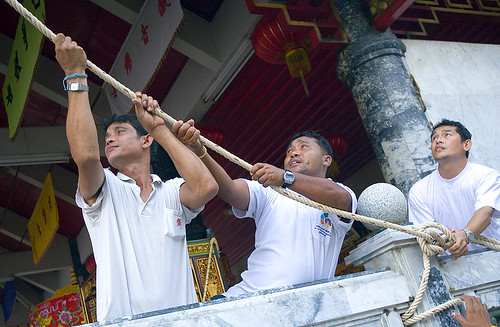 As we arrived the pole was just being tied up with guy ropes before the lanterns were attached to a large bamboo branch which was then hoisted halfway up the Go Teng pole with 9 lanterns hanging from it - 9 lanterns for the 9 emperor gods. 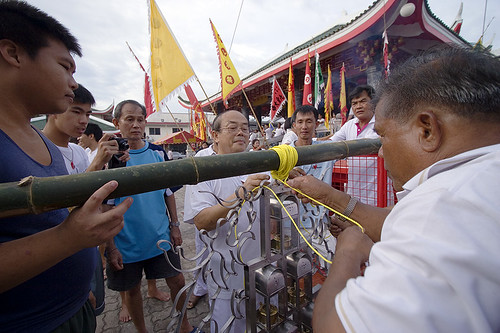 Many people come to the shrine on the first evening for prayers. There was also a firework display which we could see from our house - must remember next year to stay in the village for the fireworks! Below - a couple of photos in the shrine. Kathu is an important part of the festival, because Kathu is where the festival started in the mid 19th century. Shrines in Phuket Town like Jui Tui and Bang Neow are larger, but the people of Kathu know their history and take a lot of pride in the old traditions. 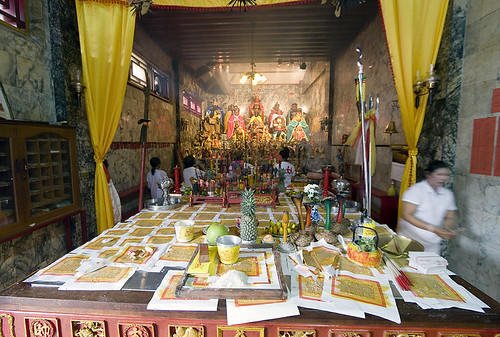 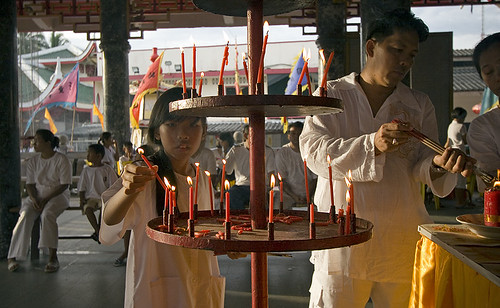 Fireworks and especially firecrackers play an important part in the festival. Loud firecrackers are said to drive away bad luck and bad spirits. We bought a few fireworks home - the kids enjoyed playing with sparklers... 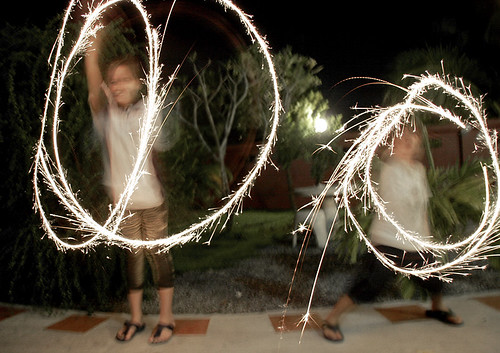 The first main event of the festival was the first street procession on the 10th of October from Sapam Shrine, which is about 7km north of Phuket Town. I went to the shrine before 7am, before the procession left the shrine - they walk all the way into town from there. It was a busy morning at the shrine - Sapam is not a big community but I think they were all there! 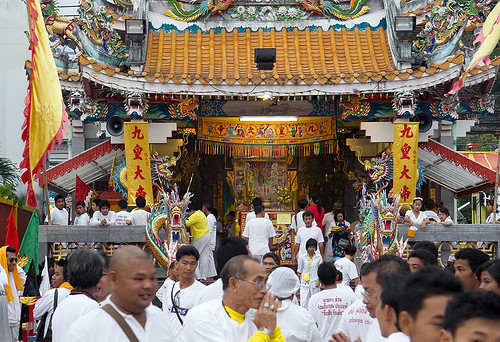 * Warning - if you scroll down further, there are graphic images which may not appeal to all people *

The festival is partly about purifying the body by eating the right food, drinking no Chang beer etc... but I hope nobody reads the words "vegetarian festival" and thinks that Phuket is full of hippies and tofu burgers and "meat is murder" t-shirts. Indeed, there is plenty of blood spilled during the festival. Some people are (so I believe) born to be Ma Song, or "Crazy Horses". Some of these Ma Song undergo acts of self mutilation or extreme piercing. By doing this it is said they bring luck to their community. Some of it is quite gruesome, some is more spiritual. Here are some of the Ma Song at Sapam Shrine ... 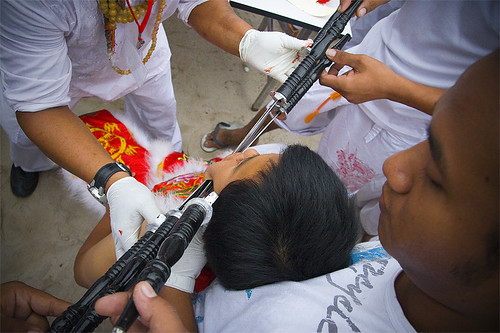 Above - this Ma Song has just had his face done. Well, had his face impaled by 6 fairly large swords, actually. Just doing his bit for the local community. So is the guy below, though his chosen torture is pineapples. 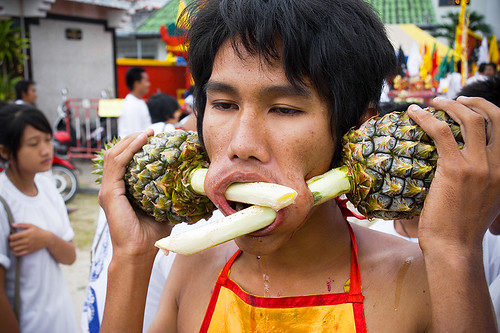 The next day, 11th October, was the turn of Sam Kong Shrine, which is easy to find on the Northern edge of Phuket Town only 800m from the big Tesco Lotus store. The Sam Kong area is packed with food stalls during the festival - some photos here. Again I was at the shrine early, though maybe not early enough. To see the actual piercing taking place you gotta catch the early bird! I was there 6:30am, should have been there at 6. But it was a grey and slightly wet morning and did rain quite a bit later. I did not follow the procession into town as I had plans to be in town for either the 13th (Bang Neow Shrine) or 14th (Jui Tui). 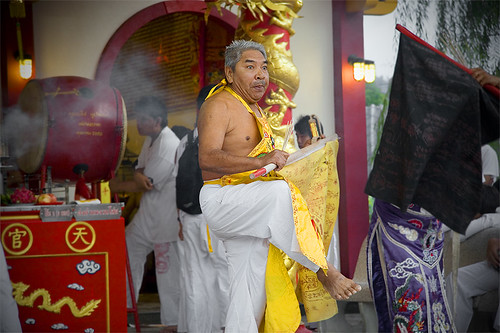 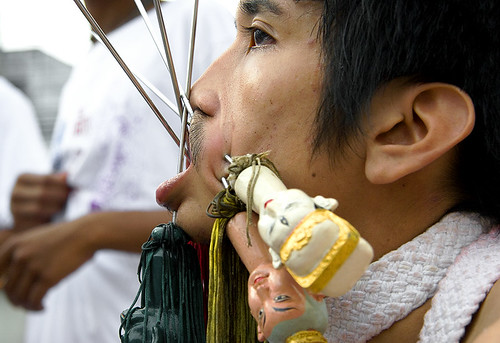 The face piercing above is more traditional using fairly small (but sharp) skewers with Chinese heads on the ends. In more recent years I feel that the piercing has become a kind of competition. And I am sure that the participants/devotees are aware that by piercing your face with something large or bizarre, you're more likely to make the papers! Or at least make it onto Jamie's Phuket :) 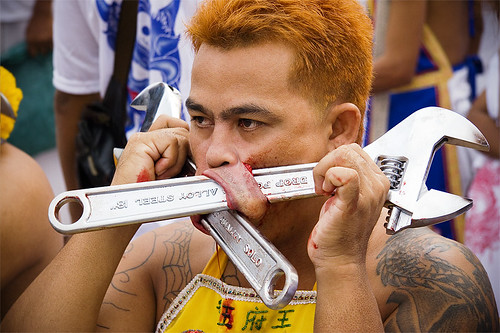 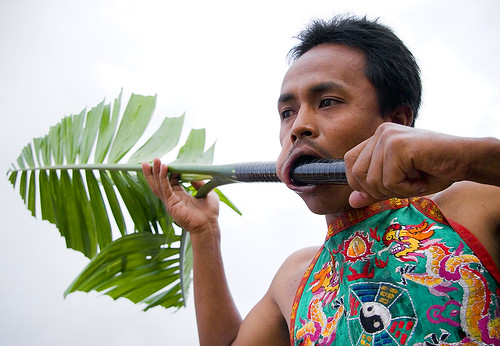 Alongside the weirder piercings you find the tradition and history. It's sometimes hard to imagine, but this festival has been part of Phuket for a long long time. When the festival originated, George IV was King of England. The old tradition is very much alive and I do sometimes feel a bit guilty of getting in the way while trying to take a photo. The vegetarian festival is touted as a tourist attraction and I do think that this year I saw more tourists and more foreigners with cameras at some of the events, but not so many really. This IS something to experience for sure, but I know that 95% of visitors come to Phuket for sun, sea, sand, seafood and other things beginning with S. At the shrines I saw familiar faces of local residents and locally based photographers, and also a few photo pros with big lenses and "my camera is bigger than yours" attitudes :) 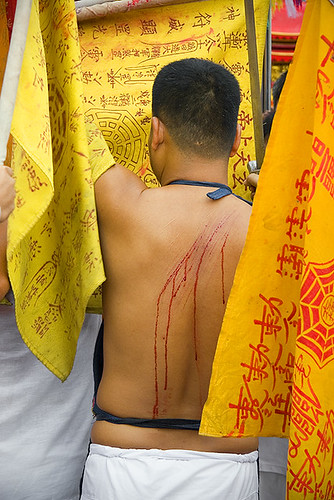 More photos and words coming soon. I was in Phuket Town on the 13th for the Bang Neow Shrine procession and at Kathu Shrine on the 15th on a grey drizzly morning. More photos on my Flickr page and more information about the festival with links to older posts on this blog here: The Amazing Phuket Vegetarian Festival.