Update 2013. This blog post was in 2007, since then I have many newer blog entries about Phuket Town events, cafes, restaurants or about walking around and exploring the town. Phuket Town is my favourite part of Phuket for sure!

Yesterday I decided to take a walk around Phuket Town (officially called Phuket City now). Better to do this at the weekend when the streets are quieter. It's not a small town, but the urban sprall can be left alone - the average visitor will be more interested in the old center, the market and the various temples. I wandered for a couple of hours and would need another afternoon of meandering to cover everything. Unlike many provincial towns in Thailand, Phuket actually has some character, some history and some interesting old architecture. I do recommend a walkabout. It has been a while since I did this - normally the town is a place to come for business (paying tax or social security or renewing visas and work permits), but I did enjoy yesterdays stroll. The old town has a lot to see. 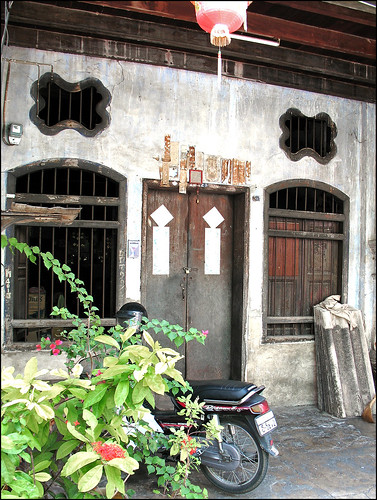 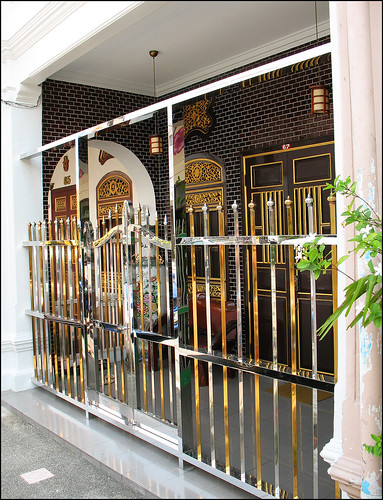 (above) 2 old shophouses in the old town, one rather better looked after than the other! 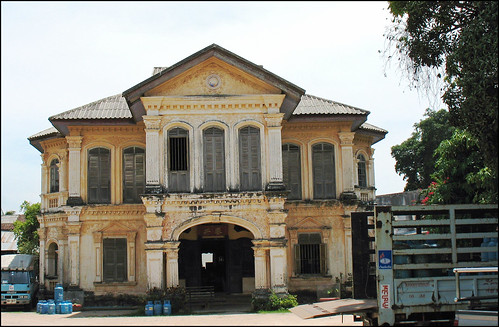 (above) Old mansion on Dibuk Road 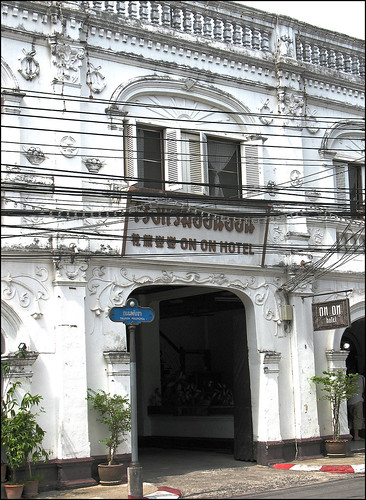 (above) The old On On Hotel. I actually stayed a night here back in 1999. It has been totally renovated now and reopened in 2013. 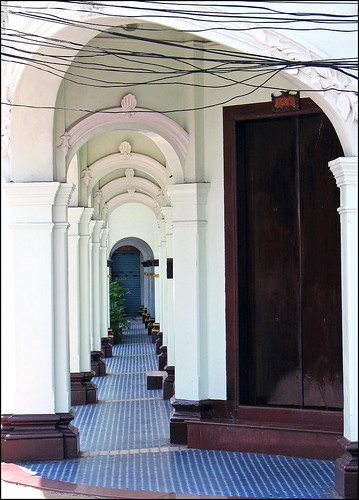 (above) Arches on Dibuk Road

The first place I wanted to see was the Catholic Church. Due to it's history and location, Phuket has a variety of religious influences. Christianity is alive and well, with weekly services at this church and other assembly rooms. What I did not realise (sometimes you need a walk to take time to stop and smell the roses) is that on the same street as the church (Soi Taling Chan, on the other side of the clock tower from the Metropole Hotel) there is also a mosque (Yameay mosque) and a Chinese Shrine (Hock Guan Kong). It has always struck me that Phuket is a melting pot. I don't want to dwell on religion right now, but many visitors may not realise that the population is around 30% Muslim. A man leaving the mosque after prayers stopped to say hello. "We're all the same", he said. I wish everyone felt the same way. I suggest you take a walk down this street. Buddhism, Islam and Christianity all within 200 meters. 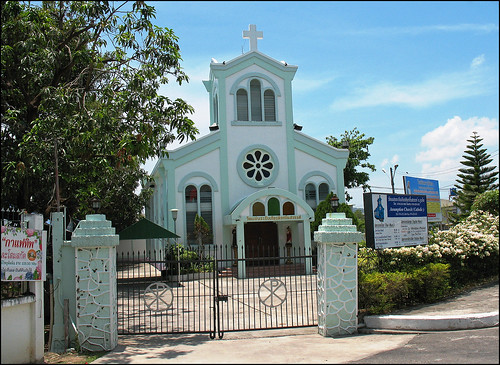 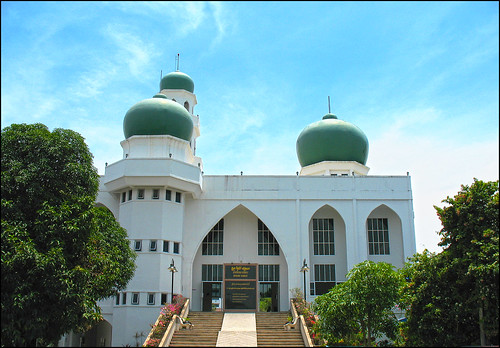 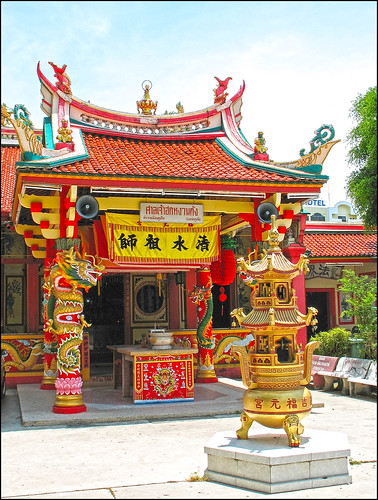 Along the same street (above) - church, mosque and shrine 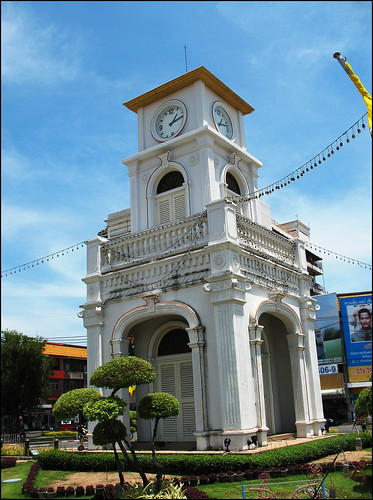 A few hundred meters north of Soi Taling Chan you find the old town, the market, the local bus station, several cheap guesthouses and the business centre. The main streets to wander are Phang Nga Road, Thalang Road, Dibuk Road, Ranong Road, all within a few blocks of the market. Up on Dibuk Road is a fair sized Buddhist temple (Wat Phutta Mongkhon Nimit) which has some beautiful external artwork and a collection of chedis (see below).. 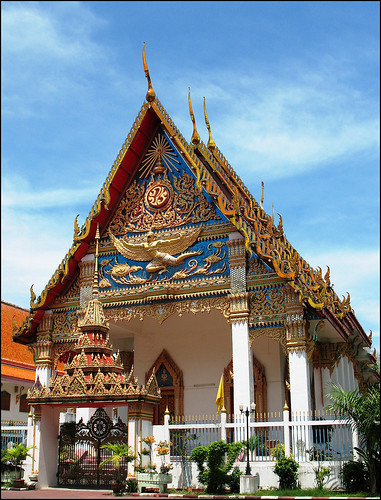 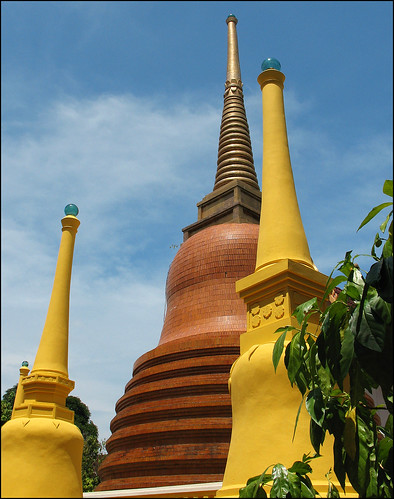 As I was walking later on Phang Nga road, a monk happened to pass by ... 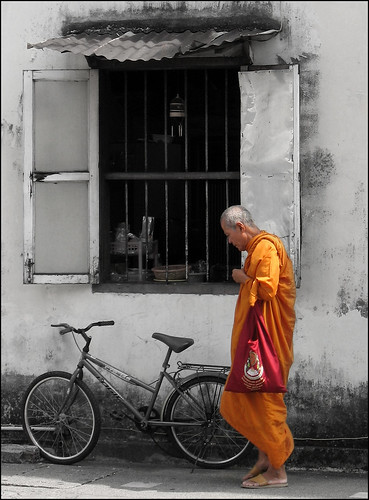 Just along the road from the temple entrance is the north end of Soi Romanee. This narrow street was quite captivating, that is to say I liked it. Old buildings, a view of the temple roof to the north, and I am happy to say (on this hot day) I found a small cafe there called "Natural Farm" (note: this cafe does not exist now, 2013, but there are plenty of cafes in old town), where I enjoyed a sandwich and a refreshing lemon soda. The street was very quiet. As I sat resting, maybe 2 vehicles drove up the street in half an hour. One of them, a rather fancy Mercedes, parked in the house opposite the cafe.. don't let the old houses fool you - there is old money here. Next door to the cafe was an art/handicraft shop. A couple of doors down was an interesting looking bar called Glastnost. Phuket town has lots of small, unique bars, cafes and shops hiding up narrow back streets like Soi Romanee. 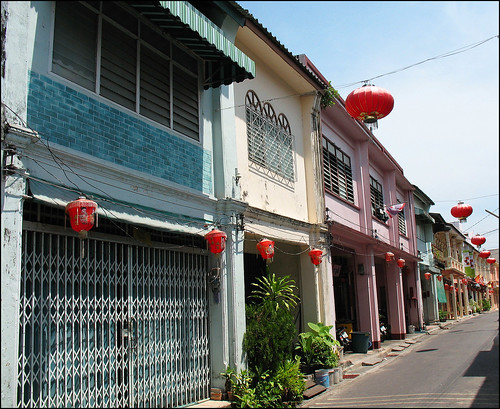 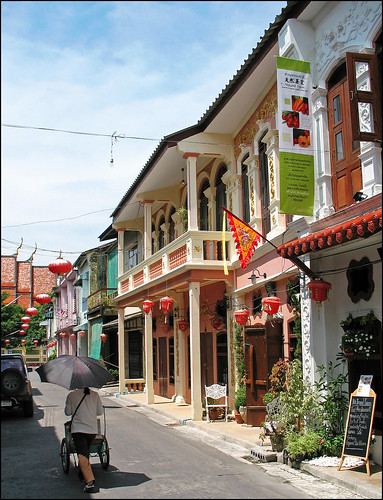 (above) Soi Romanee between Thalang Road and Dibuk Road

That was quite enough wandering for a hot afternoon! I did not get to the market or any of the other Chinese shrines (such as Jui Tui and Bang Niaow). If you want to see something of real Thai life, Phuket has it all over. The town/city is a good place to start if you have limited time. The local news just reported that a museum will be created in the old town in a renovated historic building. If you are traveling on a budget there are several guesthouses such as Old Town Hostel, Phuket Backpackers etc.. And there are some nicer hotels in Phuket town too. Getting to the beaches is easy - local buses run from the market (or you could splash out on a taxi). At the very least, I think a day of pottering around the streets is well worthwhile. I do it as often as I can!


You have been reading : Old Phuket Town