UPDATE - This is a very old 2006 blogpost - here's a newer one : Radar Hill - Highest Road in Phuket 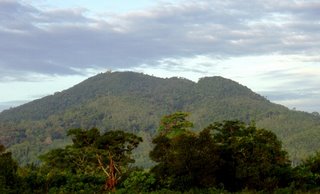 The second highest point in Phuket is what we call Radar Hill. Visible from large areas of Southern Phuket, it is unmistakable, as there is a radar dome on the top. Or as my daughter calls it "the hill with the ball on". The actual name is Khao Mai Thao Sip Song, and the hill is about 520m above sea level (about 1700 feet). You can see the hill from Patong, from Chalong and from Kathu. We can see it from our house. If you go up Buddha Mountain, you can see it from there too, so once the big Buddha is complete, the views from Radar Hill will get even better! The view on the left is Radar Hill as seen from the road in Kathu between Tesco Lotus and the Caltex junction, on the way to Patong (which is on the other side of the hill). 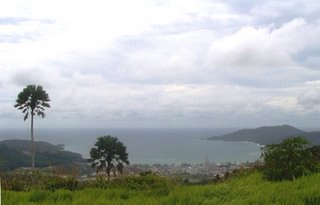 Although the hill overlooks Patong (see photo), there is no way up there from Patong. The long and winding road up Radar Hill begins as a small side road between Wat Chalong and Phuket Town. The road is not clearly marked, and says something like "Phuket Weather Station, 6km". Easy to miss. If you're coming from the North, if you reach Chalong temple, you've gone too far. The road up is paved all the way, but does have some narrow, steep and twisty sections. You don't need 4WD. On the way up there are many views across Chalong Bay, and as you get further up, there are sea views to the West of Phuket too, over Karon beach, though there's no view of the beach itself. You can also get a view across Kathu and Bang Wad reservoir at one point. Also a GREAT place for a sunset photo over the ocean, but driving back down in the dark can be hairy! 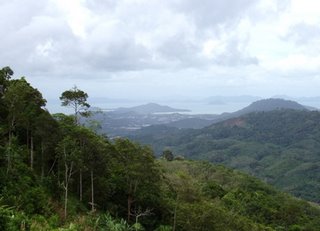 There are a couple of places you can stop close to the very top, and get a view from the top of Phuket across the hills and across the Andaman Sea to the west. You can't reach the very very top, as the Radar dome is a military installation - also don't take photos in the direction of the dome, as there are armed guards watching you. I recall last time we went up, speaking to one of the soldiers. He had been up there when the tsunami hit. He had seen it happening. One can imagine how he felt. We like to get up these hills to feel the wind in our hair and get ourselves some fresh air. When you see Patong from up here, it looks small and insignificant compared to nature, compared to the sea, the hills and the sky....

• Here's some more photos of Radar Hill from July 2006


You have been reading : Radar Hill, Phuket