So, the vegetarian festival is over for another year. Or is it? Actually, 2014 sees a rare event since the 9th lunar month occurs twice and there will be a second vegetarian festival from about October 24th to November 1st. Apparently this only happens every hundred years or so, and it does seem that nobody is quite sure what to do second time around! I know that only some shrines will be participating and there won't be the massive street processions of the main festival which took place September 23rd - October 3rd. I'll have to wait and see what happens!

I already blogged Part 1 of the 2014 festival. This post covers all the events that I attended from September 27th until the end of the festival. I admit to getting a bit lazy over the weekend 27th - 28th September. Alarm set for 5am, with intentions to visit shrines, but both Saturday an Sunday mornings I turned off the alarm and enjoyed a rest. Fair enough, I do work all week after all! But when we hit Monday 29th, it was time for some action. I headed into town before 7am to watch some of the street procession from Bang Neow Shrine. This year I have tried to spotlight some of the more spiritual aspects of the vegetarian festival, not so much of the face piercing which tends to get most of the press. 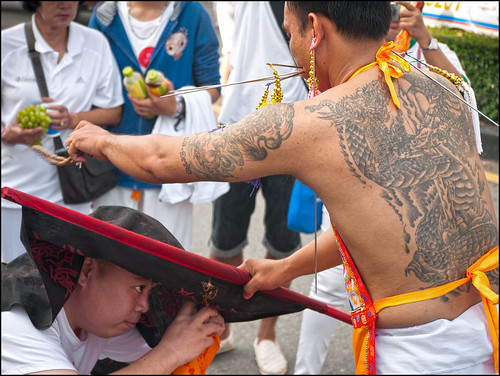 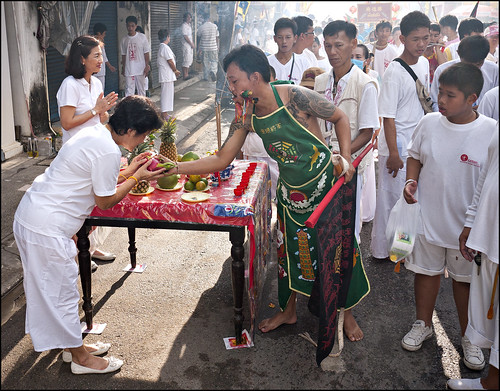 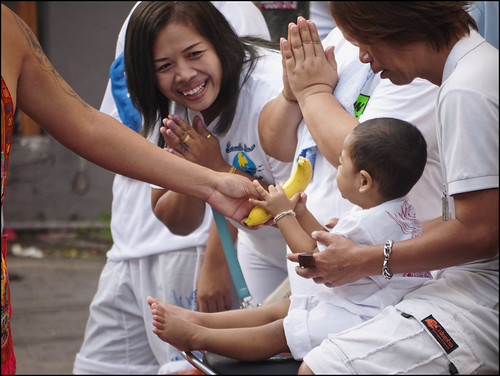 Of course the face piercing cannot be ignored! By their pain is the bad luck of the community cast out! 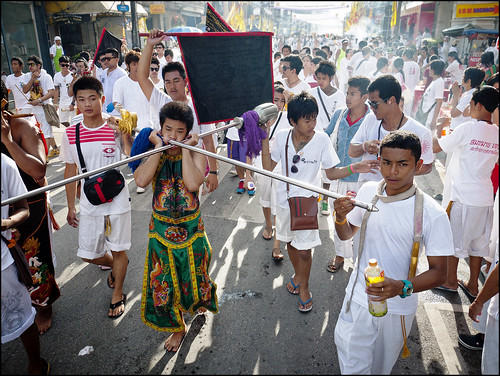 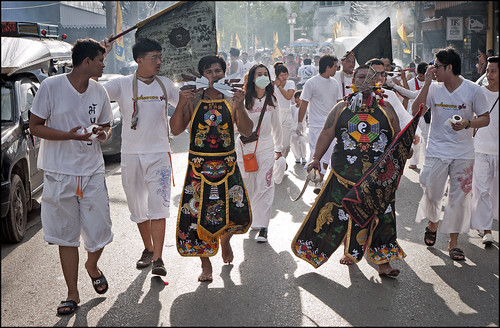 And at the rear of the procession come the gods carried by teams of young guys through a hail of firecrackers. 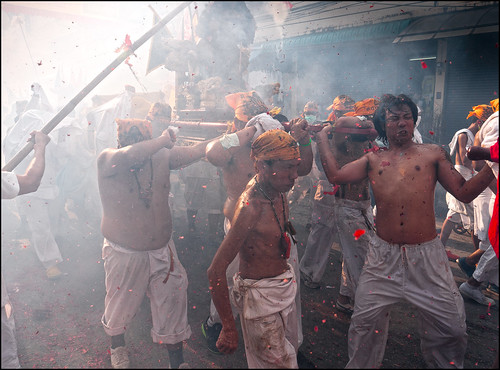 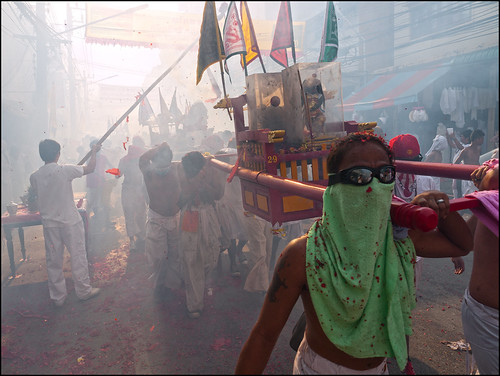 The very next day, September 30th, was the biggest of the street processions starting from Jui Tui shrine and winding around the old town, down to the sea at Sapan Hin and back to the shrine. It takes about an hour for the whole procession to pass, and you can then move location and see it all pass again :) Jui Tui features something that Bang Neow does not - female Ma Song, and not just a few. The morning started thundery and a little wet, but thankfully the rain stopped. 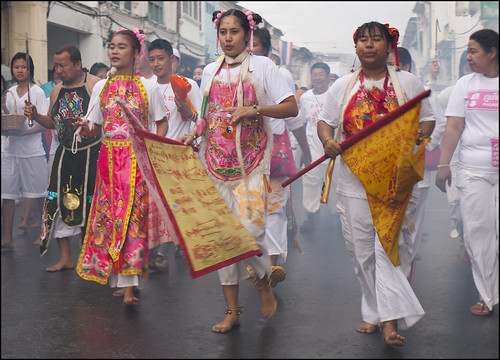 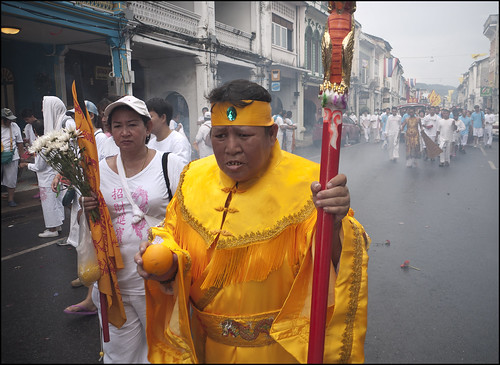 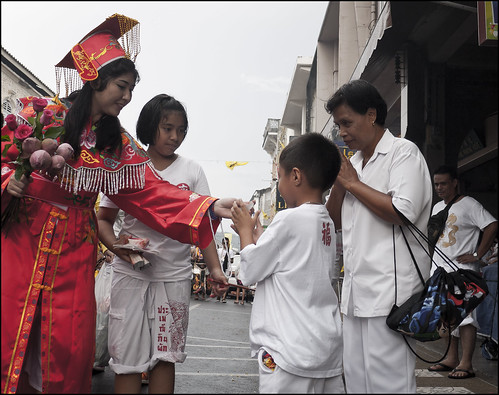 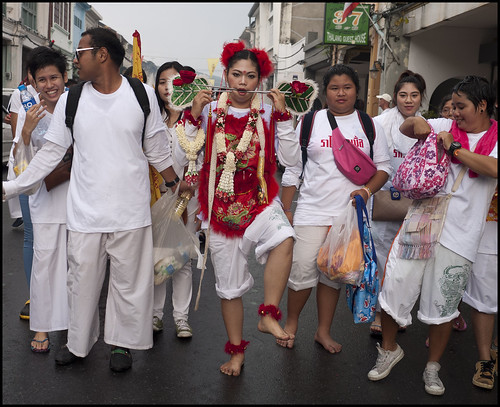 I stood on Thalang Road in the center of old town for this procession. Businesses along the street set up shrines outside their door. 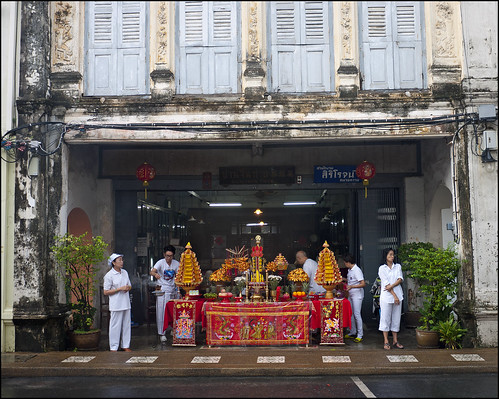 The respect shown to the Ma Song by the local people is obvious. And I am glad to see the old traditions being passed down to the young kids. 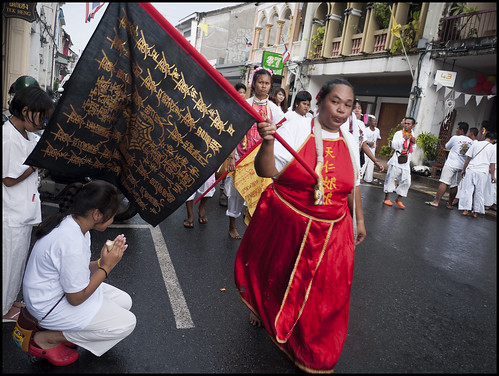 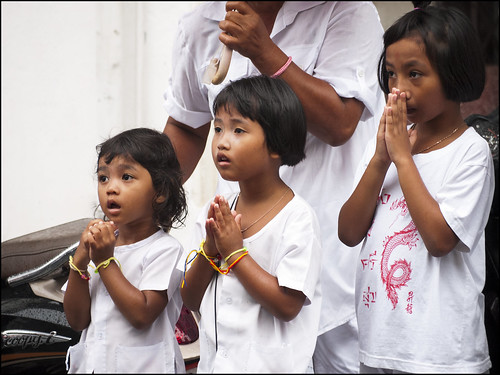 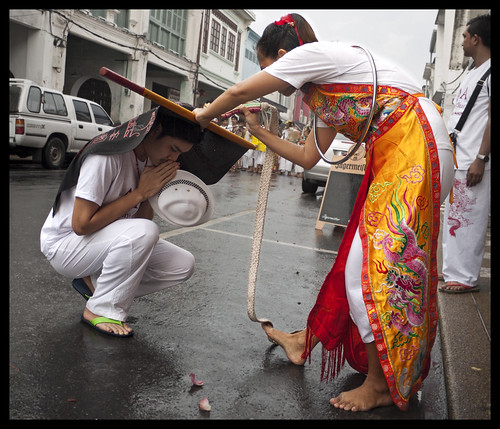 As the biggest shrine, you might expect a few bizarre piercings to be found on this morning ... 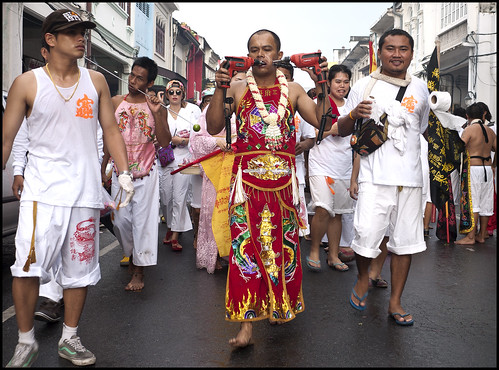 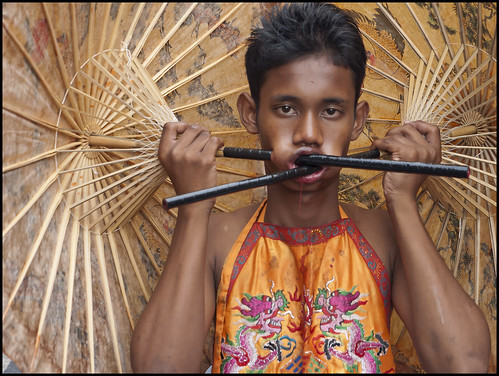 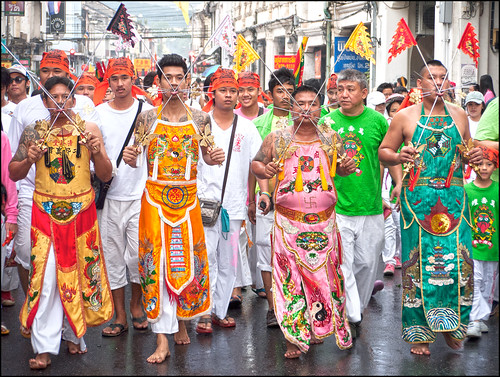 At one point, I was standing in the street with my little Lumix G1 camera and the whole procession stopped and posed for me. I looked around expecting to see some pro photograher next to me, but no .. this group shot was just for Jamie's Phuket. Thanks everyone! 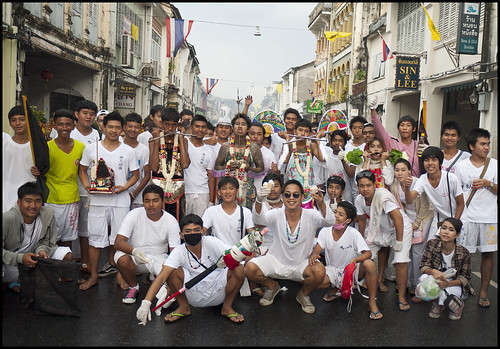 And along came the gods. Every year I try to get a perfect photo of firecrackers exploding as these guys carry their chariots through the streets. Will try again next year, although there are always a few good photos if you press the shutter enough times! 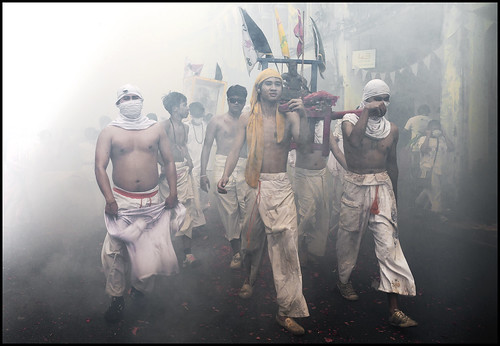 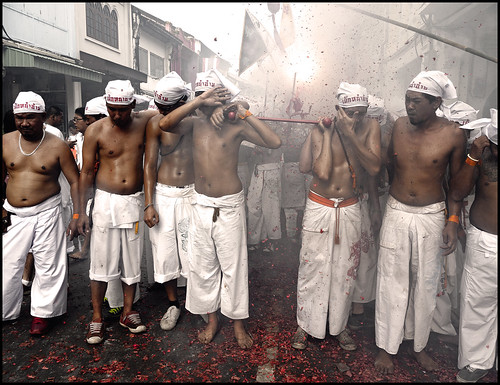 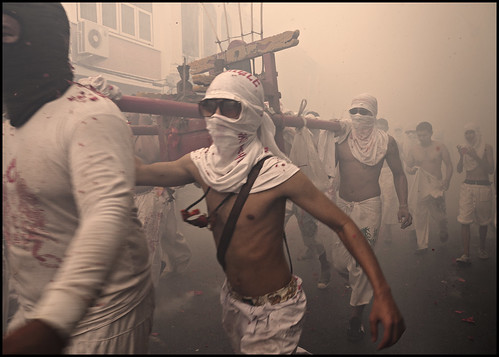 This procession really is a buzz for me. I'd happily have stayed another hour but of course I have to work. Lots more photos can be found on my Flickr account - see Phuket Vegetarian Festival Photos. I'm going to need a Part 3 on the blog to cover the last couple of days. I love this festival and although I can understand people who don't like it either due to it's bizarre rituals or just that the traffic gets held up around town every morning, I think it's brilliant. And some people may say it's getting more commercial. I don't see that. Maybe a few more young guys doing odd piercings so they can get on TV. And despite claims that the festival brings tourists, I don't see that either. Not too many tourists watching these events, mostly locals. Certainly more tourists than when I first looked in 2006, but still there is not way you can call it a tourist attraction / something for tourists .. This is a 180+ year old event and tourism has been big in Phuket for less than 30 years.


You have been reading : The Phuket Vegetarian Festival 2014 - Part 2