So we're in the middle of the 2014 Phuket Vegetarian Festival, I have been sticking to "the diet" since September 23rd and have managed to find the time and effort to visit a few shrines for festival events. Maybe my enthusiasm for the festival is not what it was, and (without going into to many details) it's been a hard couple of months. I have spent 5 weeks in England in 2 separate visits, the second time arriving only a couple of days before Mum passed away. And my Dad now has dementia, plus he fell over and broke his hip a couple of days after Mum died. Not the easiest time. Got back here to Phuket just 10 days before the festival started and straight back to work, so I have been a little tired. One of my main motivations over the last few years has been photography, trying to get better photos of the vegetarian festival, but earlier this year I sold my camera and have been only using an iPhone for quite a few months now! Well I picked up my Dad's old Panasonic Lumix G1 from England, it's a bit of an old camera, but I have been trying it out this week.

September 23rd the festival began in the evening with the raising of the Go Teng pole at the shrines around the island, the pole is where the gods are said to descend into the shrines. I was working so missed the ceremony this year, but you can see photos from 2011 here. I did go to Kathu shrine (my local) in the evening to snap a few photos and then into Phuket Town to get some food. 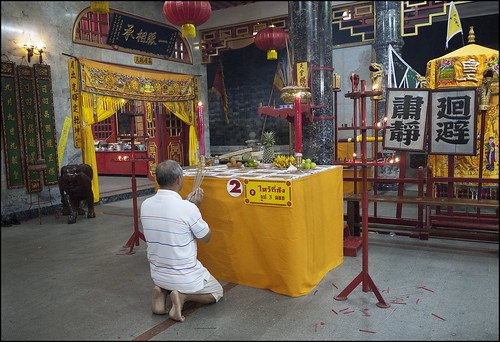 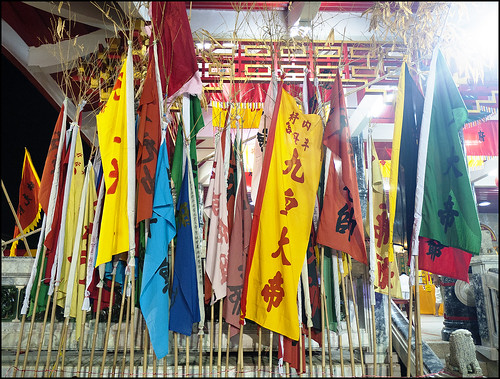 (above) at Kathu shrine, 23rd September 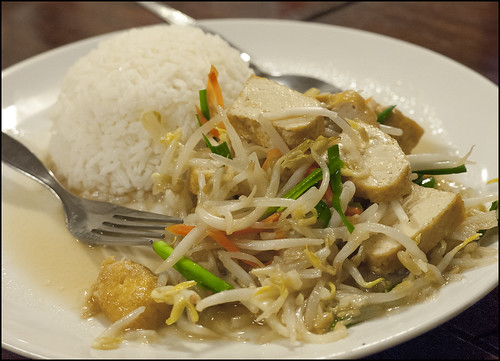 (above) Starting "the diet" .. dinner at Kopitiam in Phuket Town, 23rd September

Normally I east whatever I feel like, including lots of meat and I drink plenty of beer. So sticking to the alcohol-free vegan diet for 9 days is quite a challenge. The key is to eat a good variety of food, not just 9 days of spring rolls, and find a few restaurants where you know you can get something good. And drink plenty of juice or ice tea instead of beer :) I wrote a page about the Food at the Vegetarian Festival last year. A few photos below of some tasty dishes ... 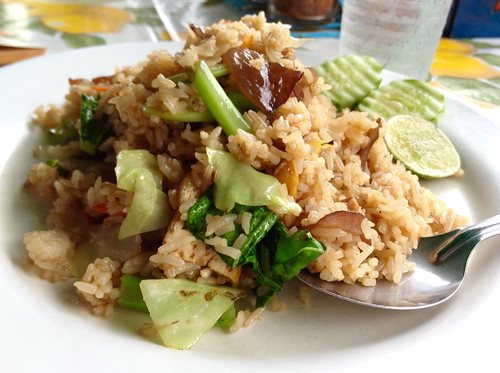 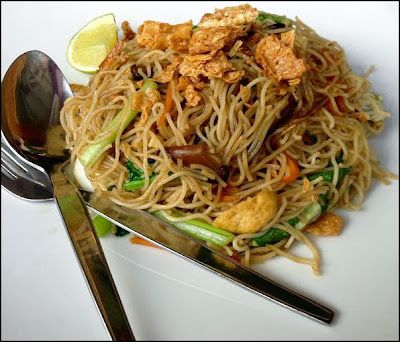 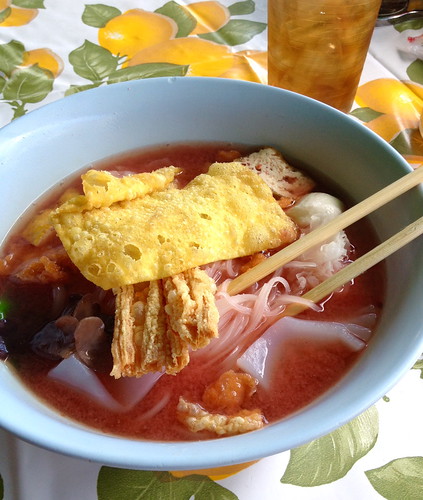 (above) 3 of my meals this week ... fried rice, "mee hoon" noodles and yentafo noodles. All vegan and all tasty.

Note : After October 3rd I will certainly be back on the meat and beer :) But this current diet is certainly good for a change and good for a clean out!

On September 25th, I was at Naka shrine in the morning. Got there a bit late really, 6:45am. I think 6am is a better time if you want to see what goes on at the shrine in the morning of a street procession. I'd not been to Naka shrine before and thought it might be quite small and quiet. Wrong! It was packed and my first view inside the shrine showed that it might be hard to get a photo, with a line of backpack-wearing "pro" photographers taking up much of the space. I find some of these photographers rather pushy and slightly disrespectful - all that matters is the photo. They shove cameras to within inches of pierced faces and have no qualms about getting in the way of obvious amateurs like myself! 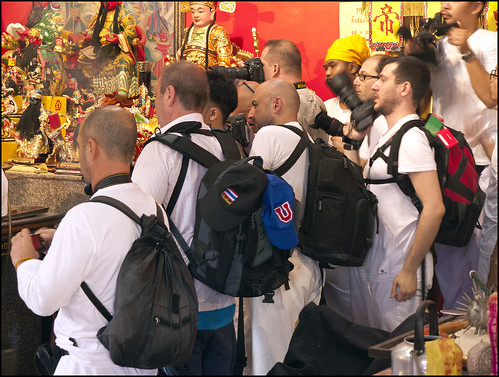 I was there for about an hour and did manage to get some decent photos with the Lumix camera. As faces get pierced all around the grounds of the shrine, it's hard to know where to look, and you can't see it all at the same time. Here's a few pics from the 25th ... 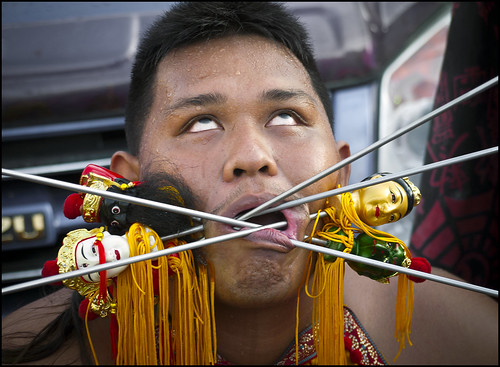 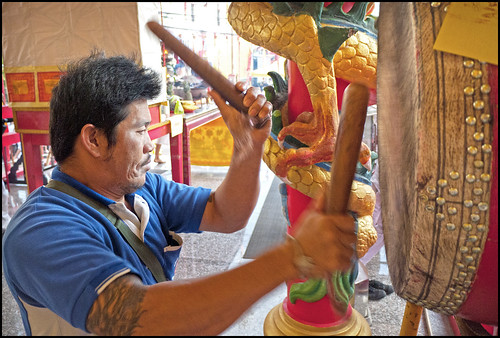 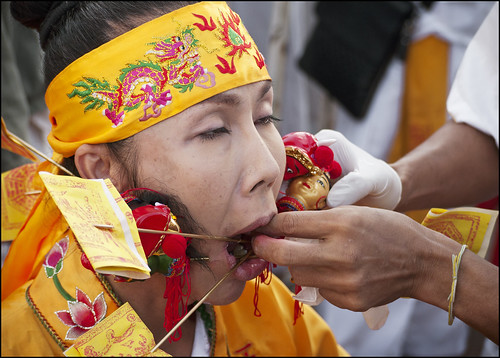 On September 26th after a day at work, I headed into Kathu village in the evening for an evening procession of the birth and death gods, or are they the gods of the living and the dead? Something like that. Statues of the gods are carried through the streets by teams of young guys and most of the Ma Song from Kathu also join the parade (no piercings on this day). It takes place just after dark, starting about 6:45 - 7pm. In the shrine before the procession, the young lads sit and wait for their walk through the firecrackers and people light incense and candles for an evening prayer. 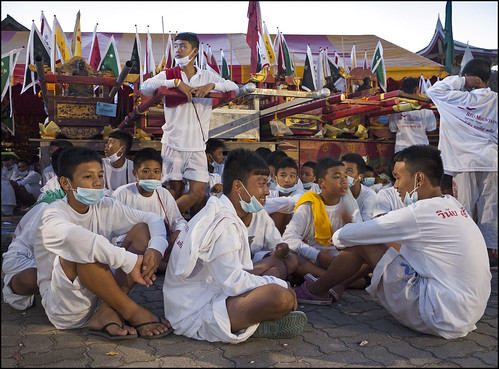 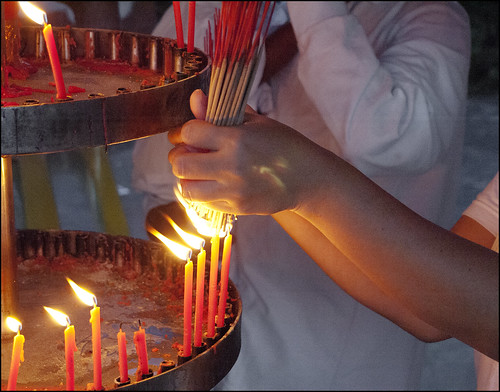 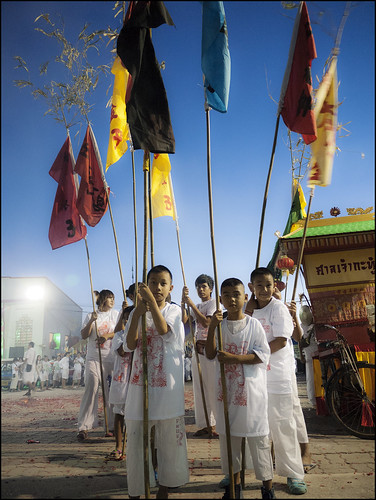 And then they're off! Hard to get great photos here. The procession keeps moving pretty quick, there are firecrackers going off randomly everywhere, it's dark and I just kind of point the camera and hope. It's all noise and smoke for 10 minutes and the procession heads through the village .. then a 25 minute wait and the procession passes again heading back to the shrine. 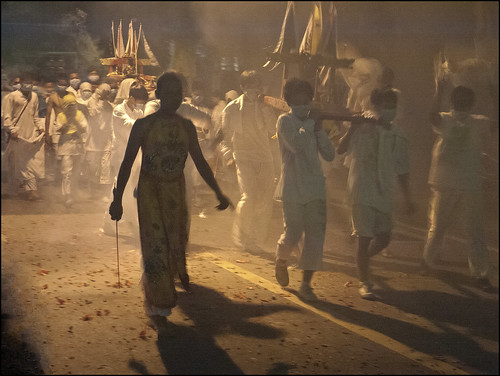 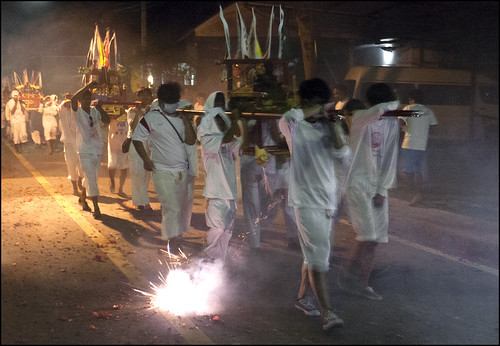 Over the weekend (27th and 28th September), well, I should have maybe woken up early one morning and visited a shrine, but yesterday and today I set the alarm for 5:45, woke up, turned it off and decided that sleep was better than pierced faces. But for sure in the next few days I'll be heading out a couple of times for street processions, firecrackers and pierced faces. The next 3 days feature processions from Bang Neow, Jui Tui and Kathu shrines. And there are evening events too such as bladed ladder climbing and fire walking. Schedule Here. There will be a "Part 2" next week. See you in Phuket!


You have been reading : Phuket Vegetarian Festival 2014 - Part 1