It was last month (July 2014) that we decided one afternoon to "take a drive". We do this sometimes, with no particular destination in mind, we make up a plan as we drive. It normally results in an interesting day with new discoveries. This time we drove north and kept driving over the Sarasin Bridge into Phang Nga province which has a lot of natural attractions. We'd been to Ton Prai waterfall a couple of times last year, only about 30km from the bridge on the way to Khao Lak, and since we'd just had some rain we decided to stop there first. Ton Prai is well worth a visit, but is not for the lazy as you need to walk through the jungle 650m from the visitors center to reach the waterfall. And we'd forgotten to bring any swimming clothes, as we had left the house with no plan ... this led to a grumpy son who wanted to swim. So we promised he could swim at the next waterfall. Lampi is a little further north, a bit closer to Khao Lak and we realised that we'd never stopped here before. Well, we almost did one time many years ago when we had an argument at the entrance and the national park staff tried to charge my wife the foreign price because she's married to me. This time was much more pleasant!

After leaving Ton Prai, which only had a few visitors, we were surprised to arrive at the Lampi waterfall and see a busy car park. And the reason for this .. is it that Lampi is bigger, more spectacular, more impressive than Ton Prai? Not really, they are both pretty cool. But .. Lampi waterfall is just a couple of minutes walk from your car, plus there are several food stalls and little restaurants .. no need for a walk in the jungle. There was also a shop selling swimming shorts so the boy could swim without getting his other clothes wet. There's a bridge over the river where you can get a nice view of the falls and we walked over this first. 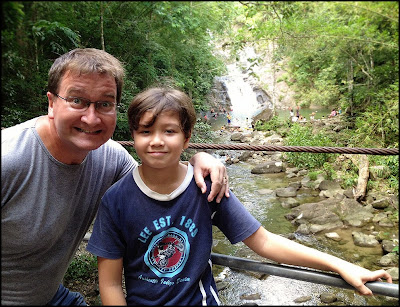 (above) me and the boy at Lampi Waterfall (on the bridge)

OK son, so you want to swim? There's a big pool under the falls. Half is roped off in a vague attempt at safety awareness, and there is a sign telling people to stay one side of the rope. I guess the side nearest the falls is pretty deep. I can imagine that in full flood, Lampi waterfall is not a place to paddle. On this day there were plenty of bathers, mostly youngsters. Our boy took the plunge and quickly found out that the water was refreshingly (or bone chillingly) cold. Certainly colder than the average Thai shower! 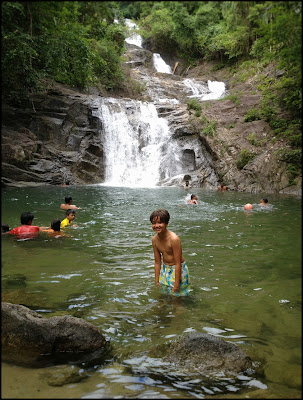 (above) Dad! It's cold in here! He did eventually take a proper dip and swim around for a while, but not too long! Certainly a refreshing way to spend an hour on a hot day. The rest of us sensibly stayed out of the water. Getting up closer, I could see that Lampi is actually quite impressive with multiple levels of cascades tumbling out of the jungle. The hills to the east of Lampi and Ton Prai waterfalls are about 500m high, about the same as the highest point in Phuket. We'll head back to Lampi again sometime, all equipped with swimming clothes! 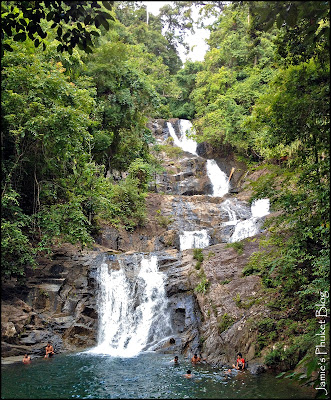 On this particular day we carried on north through Khao Lak and up to Takua Pa .. it was a Sunday and we'd heard of a street market in Old Takua Pa, but on arriving there we found nothing. Maybe it has not been a success? Not to worry, we then drove back to Phuket from there via Phang Nga on a beautiful road that we'd never taken before. Always something new to find, especially if you just "go for a drive"!


You have been reading : Lampi Waterfall