The 4th annual Kathu street festival was held on August 4th - 6th 2012. A great little local event that has grown considerably since the first time it was held in 2009. Kathu is an older area of Phuket with many older Chinese-Thai residents who are quite proud of their history and are doing plenty to preserve their heritage and educate locals and tourists about the "real" Phuket that exists away from the beaches. This is also the main aim of this blog, so I love festivals like this one, and I am happy to say that I did see a few more tourist faces in the streets this year. It was promoted in the local news, there were roadside signs up all around the area, and I kept mentioning the festival on Twitter. 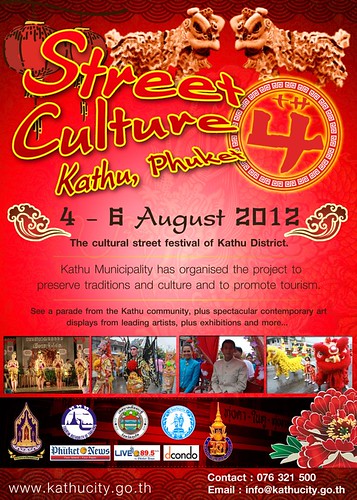 There were already some street stalls set up a couple of days in advance, and by the 4th, there were stalls running for about 1km along the road through Kathu Village, and the weather was looking very good too (this low season has had a lot of hot sunny weather). On the first evening of last year's festival, the street parade was delayed by heavy rain. It was also delayed this year. Supposed to start at 5:30pm, but nothing was happening ... maybe I had the date wrong? But I was sure the main parade was on the first evening... Finally around 6:15pm the parade appeared. I had not quite got the message that the processio started outside the village, unlike the last few years when it all started in the village. Again the procession was full of colour and smiles. 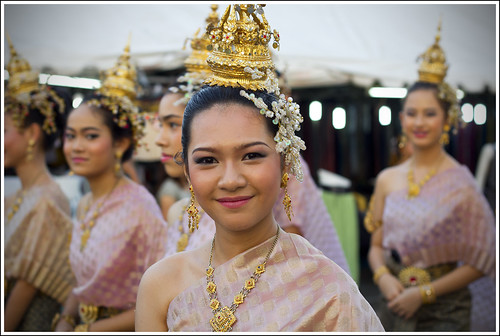 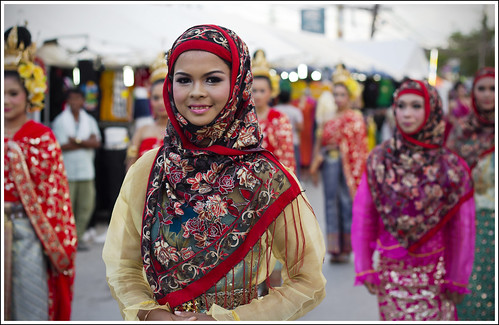 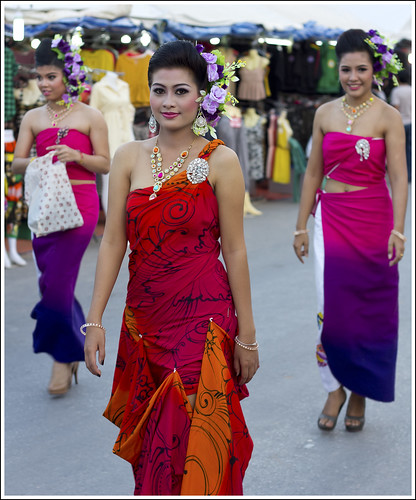 There were no amazing Chinese opera style costumes like the last few years.. Shame, they were my favourites! But a great deal of variety of costume and featuring a cross section of Phuket's people. Phuket has a big mix of ethnic Malays, Chinese-Thai and a sprinkling of sea gypsies, plus a growing foreign population with lots of workers living in Phuket who are originally from other areas of Thailand. There is also a big mix of Buddhism, Islam and Chinese beliefs here. 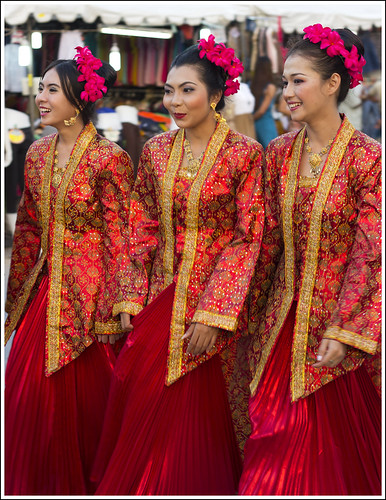 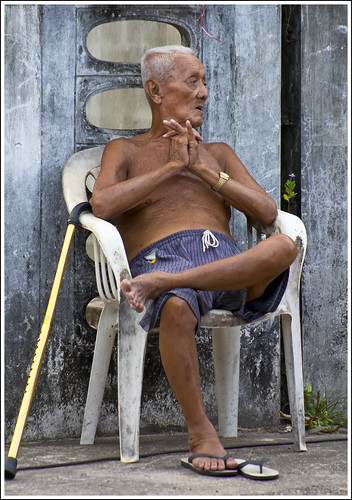 (above) A local Kathu resident watches the festival from outside his house.

If you visit a local festival like this, no need to worry about dinner. The streets are lined with stalls and most of them are selling food. As soon as I started walking after the procession, I found mango with sticky rice, and this was next to a stall selling spicy Sai-Ua sausages which are a north Thai specialty. 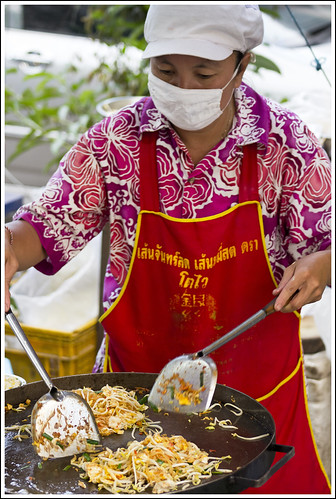 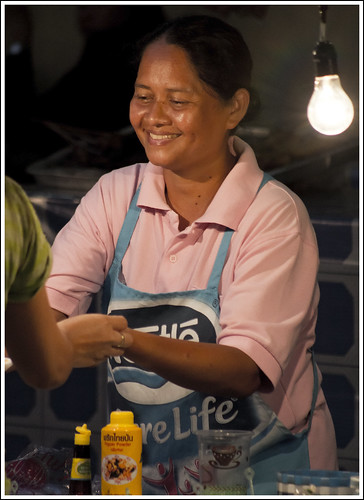 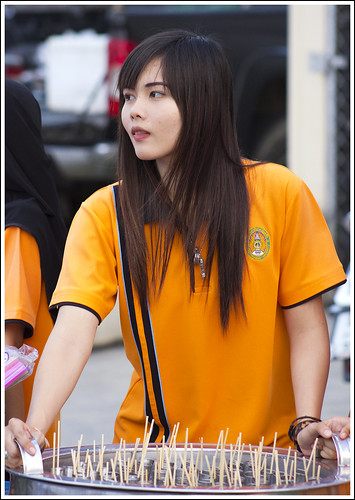 We went along again on the second evening (5th August) mostly to eat, but there were also quite a lot of stalls selling arts and crafts, and my wife stocked up on bargains like some very nice candlesticks at 50 Baht each and some wooden dolphins which she said cost only 10 Baht each. Not sure what we'll do with them! Aside from the stalls and the food, there were several places in the village with historical information, mock ups of old houses and displays of old photos. Kathu has plenty of history, a lot more can be found at the nearby Tin Mining Museum.

The hot weather was a blessing, no rain fell during the festival, and muic continued on several stages into the night. We could hear it from our house. We did not stay out late ourselves, just until around 8pm each evening. The streets were decorated with lanterns ... 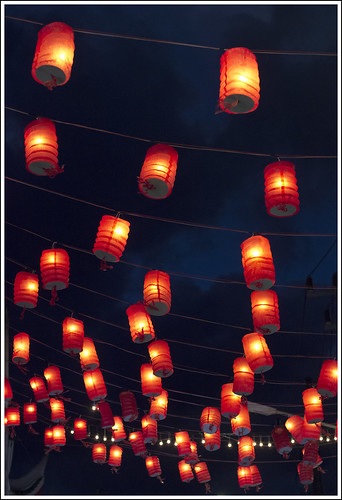 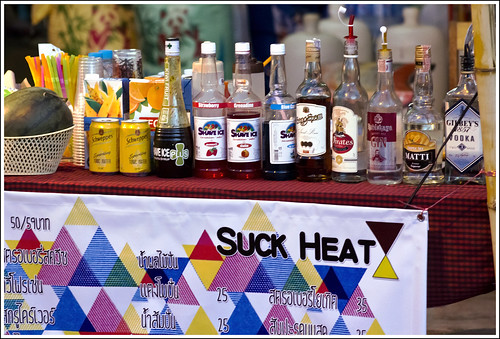 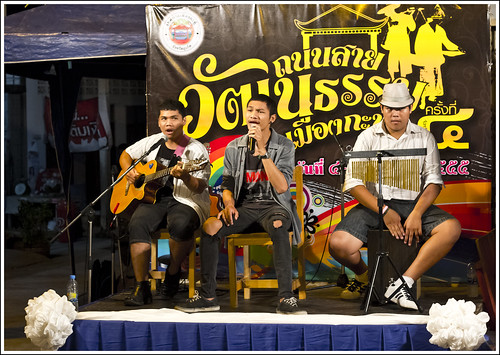 (above) One of several stages around the village with music and dancing. There was plenty going on during the 3 night festival and the streets were full of people. Kathu village is normally very very quiet, only wakes up for festivals. It'll be busy again during the Phuket Vegetarian Festival, which is from 14 - 24 October. The Chinese shrine in Kathu is one of the centers for that festival, which is my favourite event in Phuket! Looking forward to it! And before that, there's another interesting festival, called the Por Tor Festival, also known as the Hungry Ghost Festival, which is on from 31st August to 6th September 2012. And this is the stuff that makes up the beating heart of Phuket.

Map of the Kathu area


You have been reading : Kathu Street Culture Festival 2012