• Phuket Zoo - Should You Visit?

(PS - the answer to that question is probably "No")

I am not a big fan of zoos. In general, I don't like the idea of wild animals being caged, though Alex the Lion from Madagascar might disagree. Too many zoos have large animals in bare concrete pits or muddy holes, and yes, Phuket zoo has some of this. A dopey tiger is kept chained up for photos, a leopard walks around his solitary cell, the elephants, monkeys and crocodiles all do shows... this is not a modern luxury zoo and I don't think Alex would enjoy life here. So why the hell have I been to Phuket zoo 3 times? Well, it's for the kids. I can't deny my kids the chance to see some animals; I mean real life animals as opposed to what they can see on Animal Planet. Last weekend was the first time for my son (16 months old) and he was quite fascinated by things like monkeys and elephants. My daughter has been before, and loves to check out the crocodiles...

The zoo is about 15 minutes drive from Phuket Town, about 10 minutes from Chalong Jetty, down a side road that leads to the east coast. Further down the same road are a whole host of seafood restaurants. The entry fee is rather steep for tourists - 500 Baht (adults), 300 Baht (Kids). Local foreign residents can get in for the local price - 80 Baht. Were it not for that I would just wait in the car!

Inside, among winding paths in the trees are cages, pens, pits, bars..the usual animal containment systems. There are big animals like the tiger, elephants, camels, deer, crocs, a bear or two, also a variety of birds, small mammals like civets, and an airconditioned aquarium (small, and not as good in any way as the Phuket Aquarium on Cape Panwa), but on a hot day you may find the aquarium very useful! They even have a wallaby or two, which my daughter liked and ran off to tell mummy - "Mummy, I saw a Wobbly"! There are 3 shows - Monkey, Elephant and Crocodile, at regular intervals during the day. You'd need to spend a good couple of hours to see it all, along with the shows. This time we just saw the Monkey show. Monkey do maths, monkey play basketball, orangutan ride bike, monkey pose with umbrella...the show is quite fun, but there is a very very annoying commentator who speaksveryfastkapandswitchesfromenglishtothaisawadeekapand (breathe) youarenotsurewhatthehellheissayingmostofthetime. Nearly as annoying as the Muay Thai announcements in Patong "Toniiiiight, Muay Thaaaaaaaaaaaai".

We have seen the elephant show before. Elephant stand on back legs, elephant play ball, elephant walk over people, elephant p*ss on trainer. Then you can feed them bananas and sit on their back for a photo. Then they are chained up until the next show...(see photo). The Crocodile show...you really just watch it in the hope that something will go wrong. Once the guy has put his head in the crocs mouth once, it gets a bit repetitive. The misspelling on the sign below will hopefully not tempt fate... 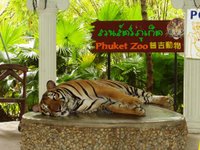 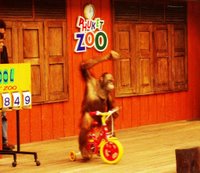 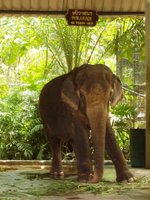 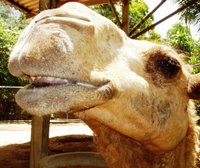 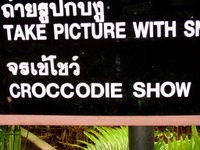 Update 2013 - Not been for years now, have no intention to go again. Kids have been on school field trips, but this is not a zoo you'd visit for pleasure. Should really be closed down.


You have been reading : Phuket Zoo