Yes, you can watch live football here in Phuket! And I am not talking about the English Premier League in a bar, but real life football in a stadium with real players. Phuket has a football team (that's "soccer" for those of you who are uneducated). Phuket FC play in the regional southern league division 2, one of half a dozen second division leagues from various parts of the country. The winners of the division 2 titles enter a play off to get promoted to division 1.. there is a Premier division above that. So right now Phuket are in a low division, which is hardly surprising, as FC Phuket was only formed in 2009! In their first year, Phuket FC did rather badly, only winning 2 games all season, but this time around Phuket are top of the table and heading for the playoffs. I have been vaguely following the teams progress via websites and social media.

I have meant to attend a match for months. Had a plan to see Phuket v Ranong a few months ago, which Phuket won 5-0, but ended up drunk and watching Chelsea v Man Utd instead. I think the Phuket game would have been better. With the end of the season approaching, a friend sent me a good ol' fashioned text message on Sunday "Going to watch Phuket, you coming or what?" - Yes! Looked like a rain free evening, kick off due for 6pm, I was delayed at work until 5:20, dashed to Phuket Town by 5:45.. made it. The Surakul stadium is on the edge of town near the Darasamut school, not far from the Central Festival mall. There's parking behind the stadium, or you can park bikes out front. Fortunately this is Phuket and not Liverpool. No huge crowds. There were people buying tickets but my friend had already bought ours, and some beers! Yes, you can take beers in.. cans only, not bottles. Entrance fee? A huge, whopping 50 Baht for adults and 20 Baht for kids. Win! 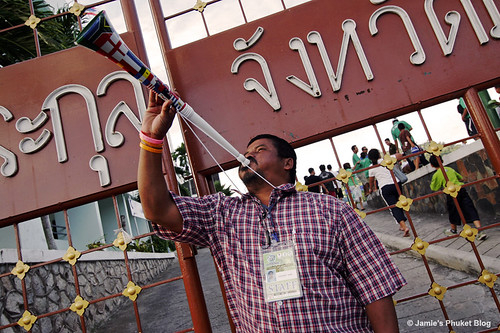 Crowd was arriving right up to kick off. No big queues, friendly staff at the gates including the guy above with his vuvuzela. We found a seat in the main stand right behind the main supporters club, all in green, with drums and hooters already making plenty of noise, totally drowning out the handful of opposition supporters from Hat Yai who were at the other end of the main stand. By kick off, I estimated the crowd to be at least a thousand, maybe as many as 1,500. The main stand is best, but there were a few hundred folks in the (uncovered) stand on the far side of the pitch too. Here's some of the Phuket FC fans just before the match started: 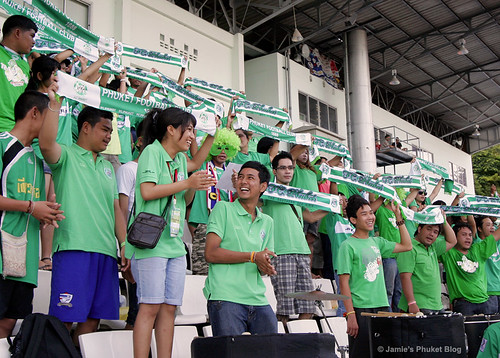 The seats in the stand are built for smaller people than me! Not much legroom, better to stand up.. after all, it's called a "stand", right? Sitting right behind the die-hard fans was good, they started with chants and drums and pretty much continued through the entire match. A very friendly atmosphere. I had not been to a live football game for many years, this was good! But Phuket needed a goal. Top of the league, not yet guaranteed a place in the play offs, though. Nervous times in the first half as Phuket went close a couple of times and Had Yai hardly saw the ball. With a 6pm kick off, the first half was played with the skies still light (sunset around 6:45pm), though floodlights were turned on during the half. Could Phuket get a breakthrough? YES! GOOOALLL! Excellent free kick by Ali Diarra, who is from the Ivory Coast and actually on loan to Phuket from Muangthong United who play in the Thai Premier League. 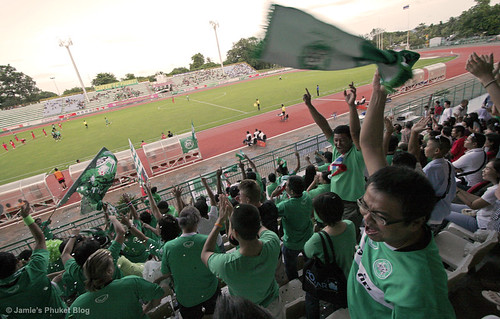 No wonder one of the Phuket fans favourite chants is "Ali! Ali! Ali!". The goal was near the end of the half. The interval, time to stretch legs, my friend went to buy some more beers. The bathrooms are on the far side of the stadium, and I'd say in need of some renovation. Not the nicest toilet in Thailand.. if Phuket FC get promoted, might be an idea to improve the facilities! The stadium itself is pretty decent, the pitch looked to be in good condition too. 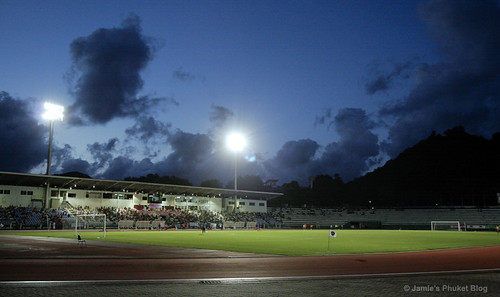 Second half in the dark under floodlights. No let up from the crowd, non stop songs and drums, but you could feel the nerves. One goal is never enough, and Hat Yai started to get some chances. Every rough challenge by a Hat Yai player was booed, and when one of them got a yellow card, a big cheer! Phuket's keeper made one great save, and the crowd started to wonder if we could win this. My friend bemoaned the lack of goals - we should have come to that match against Ranong which Phuket won 5 - 0! And then that second goal came, a well worked move ending with Camara Ahmed slotting home. Cheers and a palpable sense of relief in the crowd! Now the singing could really begin. There are only 4 games left this season, Phuket should have a chance at promotion, but 3 of the remaining games are away from home. That's why this home game was so important.

That was an enjoyable evening, and hopefully I'll be able to watch the last remaining home game, which is on the 29th August against Phang Nga, plan to take the whole family next time, I know our 5 year old boy will love it. With the match complete, hands shaken, the Phuket fans chanted "Hat Yai, Hat Yai" to show respect for the beaten opposition, and then the Phuket players came over to the stand to thank the crowd and the supporters thanked the players. More chants of "Ali! Ali!" which seemed to amuse the player himself. 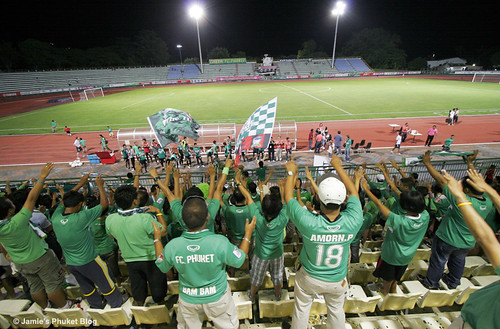 Well, maybe next season Phuket will have tougher opposition. Hope they can get promoted! If you are a football fan and want to watch a game, the stadium is easy to find, as I said it's only 50 Baht to get in, and aside from the football, you can call it a "cultural" experience. There weren't more than a dozen foreigners in the crowd as far as I could count. A couple of them were from the Phuket Gazette, who do reports on the games. A few German guys were sitting near us, one of whom I knew, a dive instructor. And I saw a few others one of whom set up a Facebook group for Phuket FC. You can find info on the games on there, as well as on a blog. There's also a Thai website and Facebook page.


You have been reading : Going to watch the Football - Phuket FC!