Yes, more vegetarian festival (and apologies for scary photos)! There is so much to see during the 10 day festival, and this year I had my parents visiting - they'd never been here for the vegetarian festival before, and wanted to see as much as possible! On the morning of October 4th, Kathu Shrine was the place to be. We arrived about 6:30am... a bit late actually as the lead elements of the procession were already starting to leave the shrine for the walk into Phuket Town - about 8km away. Reminder for next year: get there at 6am. The shrine is only a few minutes drive from our house. During the festival we can hear music and firecrackers coming from the shrine every night - as the crow flies the shrine is only 1km away. I like to visit Kathu shrine rather than the big ones in Phuket Town. Kathu is very much for the local people and after a few visits people will recognise you, it's a friendly place. We'd already been for the opening ceremonies and for an evening street procession earlier in the week.

Most of the actual piercing had already been done. If you want to see people getting impaled, you have to get up early! We had seen plenty of piercing a few days earlier at Sam Kong Shrine. We did not have so much time here at Kathu for photos, the main procession was already getting ready to depart, though there is no set departure time - Ma Song with pierced faces were heading off in their own time. Kathu is one of the few shrines that has female Ma Song. There are many women in the Kathu procession, only a few are pierced though. This lady in pink was heading out of the shrine as we arrived. 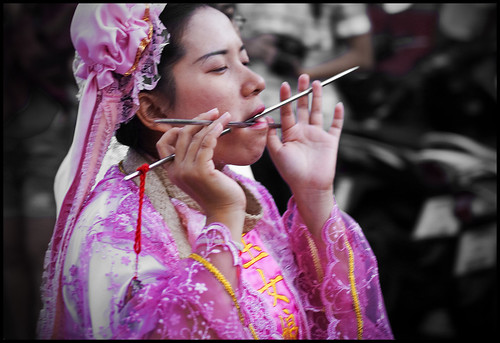 Around the grounds outside the shrine, many pierced faces were to be seen. The more traditional piercings did seem to be making a comeback this year - simple skewers, knives and shiny metal rods. A few participants were still getting the piercing done. When you see something like this, it's hard to look away! 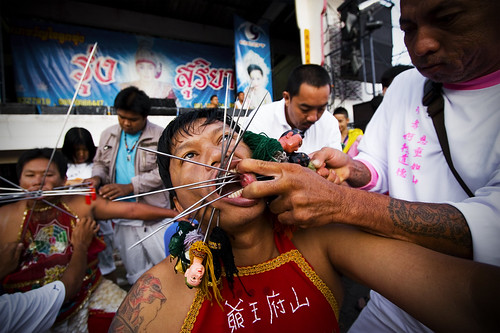 You can see this guy is pierced with multiple metal spikes each adorned with a head - these are the more traditional piercings. Nearby, a guy with slightly larger metal spikes through his face: 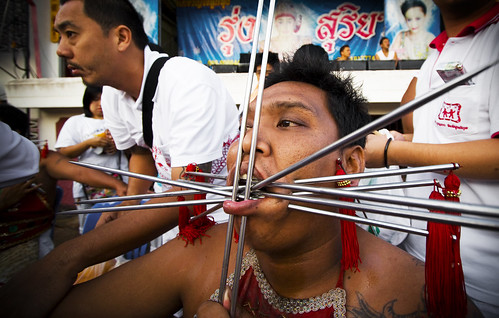 Arriving a little later made photography easier, and it was a bright sunny morning which helped a lot. Some of these photos were taking using a wide angle lens, others with a 50mm standard lens - the 50mm lens is very good for portraits and good for low light, as it has a maximum aperture of f1.8. With the wide angle you need to get in very close to the face, like this one: 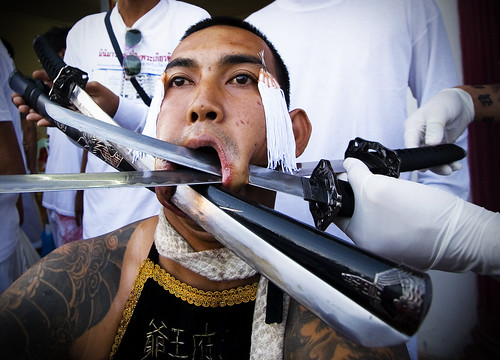 A step up from skewers and metal spikes, this guy has gone for the swords. You'll notice hands in the photos wearing surgical gloves. It does seem a bit gory, but the assistants helping with the piercing do mostly wear gloves and there are piles of cotton wool and tissues to mop up "spills" - and I noticed that all the spikes and swords and whatever are cleaned with alcohol using a swab before the piercings take place.

Not everyone goes for the traditional style piercings. Some people moan that the festival has become a bit of a freakshow in recent years. The younger men especially seem to be vying with each other to get their photos taken. Festival photos can be found on websites and in newspapers round the world, and the photos chosen for armchair visitors tend to feature the more outlandish piercings. Spikes in the face, interesting... Gun in the face, bingo! You're in the paper, mate! 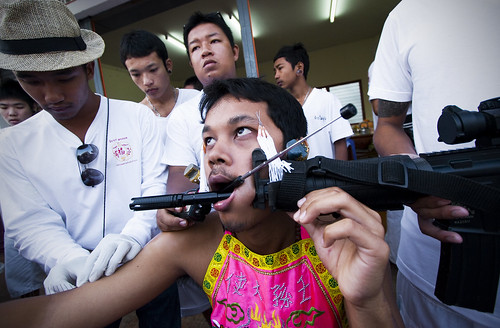 Or how about a couple of power drills? Good advertising for Bosch? Note - he did not drill the holes. The holes in the cheeks are made with sharpened spikes first, and the piercings inserted later. I am sure "drill head" made the paper too! 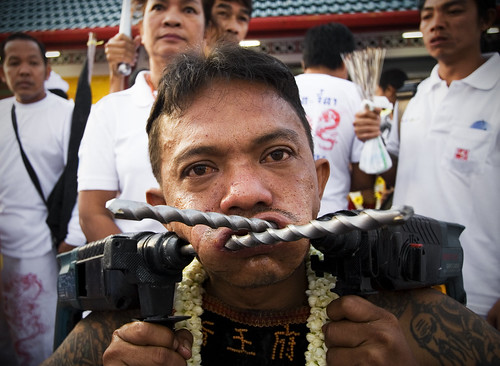 Enough piercings for this year! There are more photos on Flickr of the morning at Kathu Shrine. This year I have tried to show more than just the pierced faces. The festival has a big religious element to it. In every procession, teams of men carry statues of the gods through the streets. The people lining the streets are ready with firecrackers, the noise, the smoke, the Ma Song blessing the village, it's all designed to cleanse and bring good luck. As the gods started to leave the shrine, I ran up the street a little way. When you are right in the middle of this, the experience is complete - the firecracker smoke at some points made photos impossible, visibility was zero, and you have to be careful not to inhale too much smoke. A face mask is recommended. 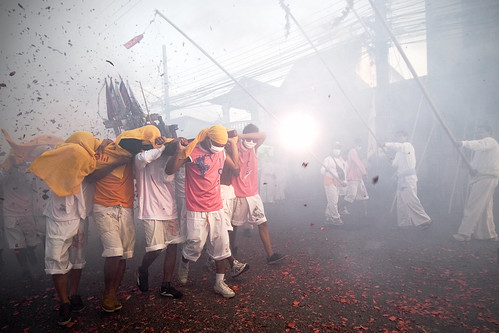 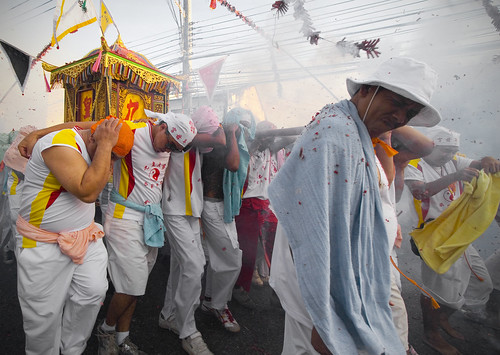 I'll get a new camera sometime before next year, I want to get some HD video, especially of the procession walking through a constant barrage of firecrackers. The photos can't quite capture the sound - if you are trying (like me) to take a photo in the middle of the procession, it's LOUD! Ear protection is a good idea, as well as a mask for the smoke... and don't be too shocked to get a minor burn here and there too! 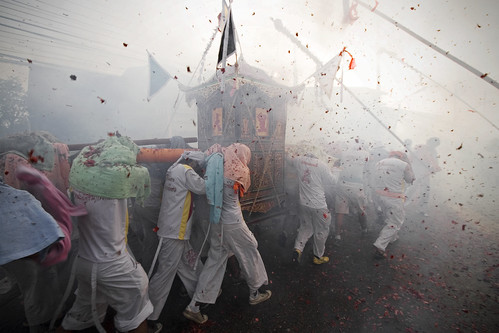 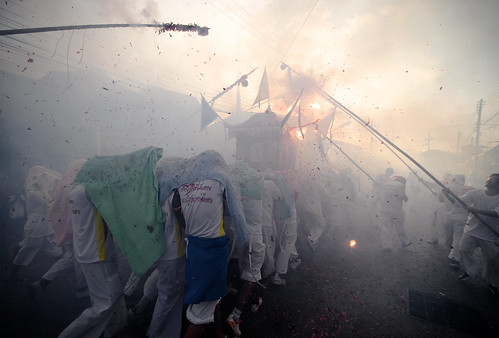 The procession was heading out through Kathu village and was all gone by just after 7am. We heard more firecrackers a few hours later, this would be the procession coming back into the village. Some of the Ma Song walk both ways - including the winding route around town, that would be over 15km of walking on a hot morning.. although despite the early morning sun, the rains came later that morning. The "unpiercing" is something I have not yet seen.. next year... There's one more blog entry to make from the 2011 festival. The photos above were taken on 4th October. The last night of the festival was the 5th. In Kathu village, they hold a ceremony called "Bridge Crossing for Purification", and that will be the next blog entry - guaranteed no piercings or blood in that one! :)


You have been reading : Vegetarian Festival - Piercings and Firecrackers