A few weeks ago I had some holidays while Mum and Dad were visiting from England. On one of their first days here, we went off exploring. Our family is not really into the very touristy things, preferring to find a bit of real local life and local culture. When I was a kid, we visited churches and cathedrals. Wherever we went, there had to be a church or cathedral. I was a kid. Mum still recalls me saying "Seen one stained glass window, seen them all". I am basically an atheist. I like the "be nice to people" aspect of religion, but not the "Praise the Almighty!" bit. I might write a book one day called "God is an egotist so praise Him or you're going to Hell", although I am sure it's been done already.

Anyway. I like temples. I am now a dad. And I have already blogged loads of Phuket Temples and Shrines. Wat Tha Reua is between Phuket Town and Thalang just south of the Heroines monument. The Tha Reua area is an older more rural part of Phuket with lots of rubber plantations and, to the east of the temple, large areas of shrimp farms. The name Tha Reua means "Port" - I am guessing that before Phuket Town became the main town that the coast on the east of Tha Reua was the main port of Phuket.

Tha Reua (pronounced Ta Roo-a) temple is not on the tourist trail. The entrance can be seen by the main road heading south from the airport, and I have driven past hundreds of times. This day with my parents was a chance to blog another temple.. or two actually as we also visited Sapam Chinese Shrine on the same day :) 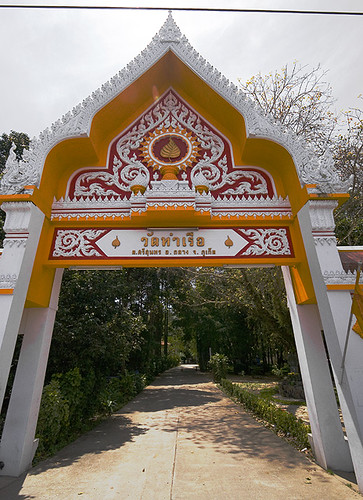 You can only see the entrance from the main road, as the main temple is hidden away in the trees. We parked in the shade for a quick look around. No crowds here. No visitors at all. Spotted a monk or 2 sweeping up leaves. The main building seems rather uncared for though some building materials were piled up nearby. 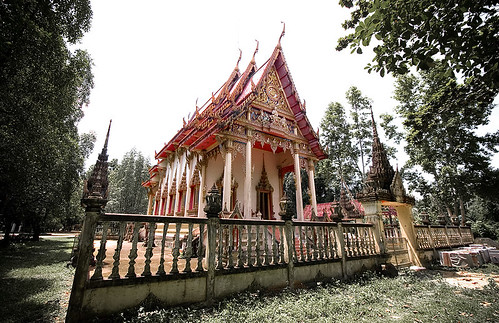 Buddha. Worth reading a bit about Buddhism if you come to Thailand. Worth looking at the face of a statue of Buddha. The word is "serene". I like to look at the Buddha images. This one is under the trees at Wat Tha Reua with the 7 headed Naga snake over his head. Looks scary but the Naga is said to have raised its 7 heads to keep the rain off the Buddha when he was meditating. 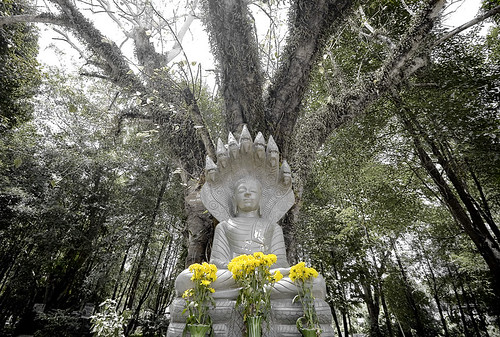 A temple like this does not take long to look around. We were wandering aimlessly around the ground when a young monk started chatting (in Thai). OK, so my Thai is not great but enough to get by. We noticed a boat being built right there in the temple. Some of the wood in the boat looked old and some was obviously new. Our monk friend told me that the old wood was part of an old boat, he said 1000 years old. My Phuket history is not perfect but 1000 years old seems a bit much. Anyway, it was the remains of an old boat, now being made into a new boat for display at the temple. 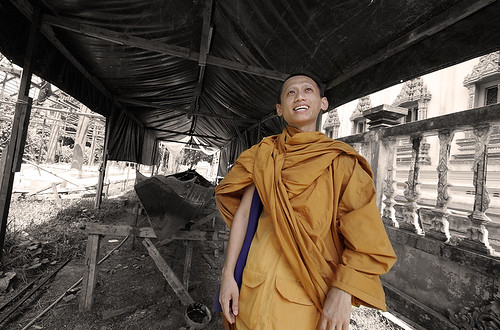 If there are any temple fans out there, Phuket is a good place to come! Buddhist temples, Chinese shrines, Muslim mosques too and even a Catholic church can be found in Phuket. Maybe don't bring the kids though. Seen one temple, seen them all.


You have been reading : Wat Tha Reua Temple