I always try to visit my "local" shrine in the morning when they are doing their street procession as part of the Phuket vegetarian festival. Kathu is (so the history books say) where the festival originated and the local community take a lot of pride in the festival and their history. I already blogged about our visit to the shrine on the 7th for the opening ceremonies of the festival. I also headed to Kathu a couple of times during the week for food, as I tried very hard to stick to the vegetarian diet for the duration of the festival. On Friday 15th the idea was to be at the shrine nice and early, but the morning looked so grey. I did not rush, got to there at about 6:30am, a bit late to watch face piercing. I had been earlier last year and had some piercing photos like this one. Last year the morning was bright and sunny.

Seemed to me that with approaching rain the participants in the procession were keen to get moving. They walk all the way from Kathu to Phuket Town, through town and end by the sea at Sapan Hin, a walk of about 8km. Barefoot. With sharp objects embedded in cheeks, or carrying statues of the emperor gods. Actually, maybe they were glad for a cooler, wetter morning. Easier walking compared to a hot sunny morning. 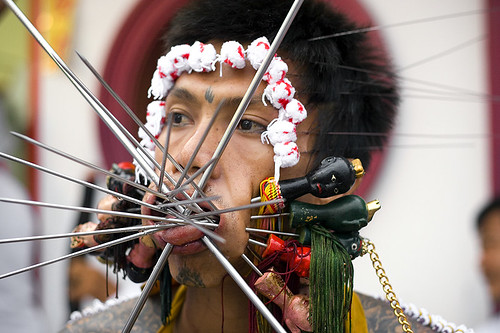 I had been shopping the day before and bought a 50mm f1.8 lens for my trusty Canon EOS 20D. Figured it would be good for portraits like the one above, and good in lower light. Using a fixed lens is rather odd when you are used to a zoom, the composition of the photo depends a lot more on where you stand, and varying the aperture can have a huge effect. And if you want to zoom out, walk backwards! 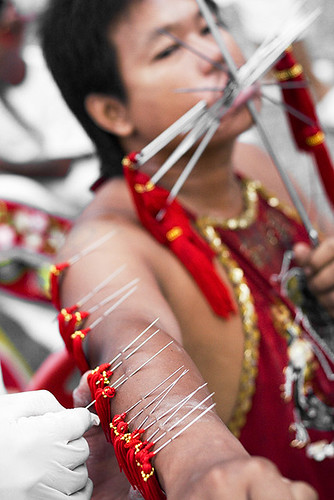 The shot above uses f2.8, as I wanted to blur the face and accentuate the piercing on the arm. Obviously the spikes in the cheeks and lips weren't enough for this guy - give me needles in the arms too! And the photo below, one of my favourites from the day, shows I think why I wanted that new lens. 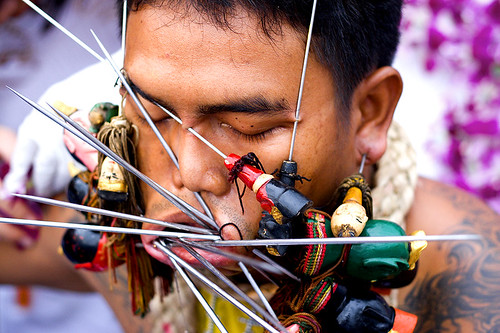 The devotees started out of the shrine at about 7am. I had decided not to follow them to town due to the weather plus this blog is still just for fun - I have a dive shop to run! The guy below is a local policeman and a regular participant in the vegetarian festival. 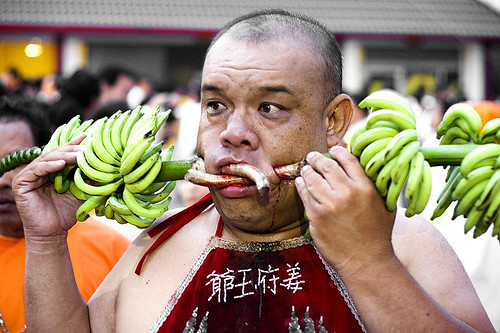 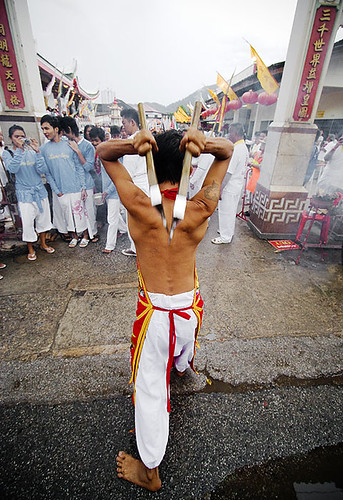 The Ma Song (above) swings axes outside the shrine. Some of these Ma Song really do cut themselves such as this guy at the Bang Neow shrine procession on the 13th. Some seem rather more careful to swing without cutting too much!

The procession left the shrine led by the most important Ma Song who was carried along on a vehicle. Other Ma Song were on foot. Not all cut themselves. I am not sure of the hierarchy, but I think that the most important Ma Song, the ones who really seem possessed by spirits, are the ones who do not impale themselves. They leap about, or walk bent like old men, offer prayers, and I hear them speaking in strange voices. Can be a bit spooky. A lot of attention goes to those with pierced faces, but Ma Song like the one below are fascinating to watch. 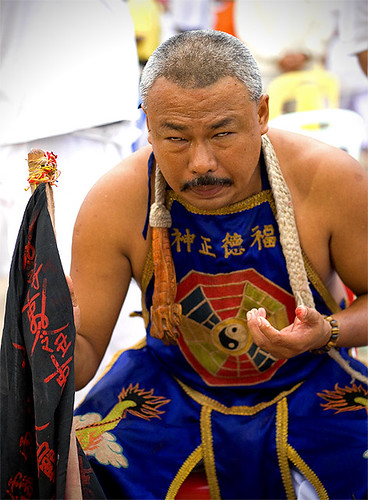 The way they walk, talk and move, I defy anyone to tell me it's all an act. I am sure there is something quite real happening, even if it's sometimes hidden behind the showmen - the ones who stick unusual objects in their cheeks in the hope of getting their picture in the paper! Yes, I mean you, Mr "baseball bat"! 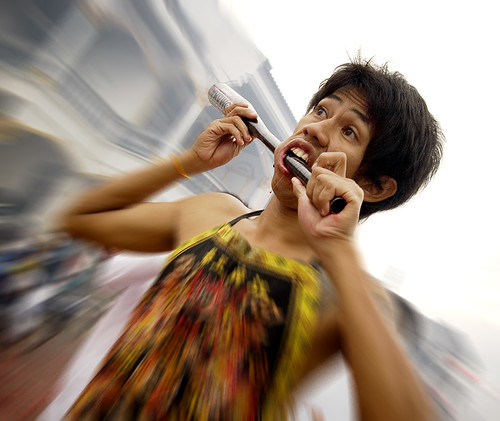 The rear of the procession is the loudest. While the odd firecracker may be thrown at the feet of the Ma Song, the majority are saved for the gods and those carrying them. As the emperor god images are paraded through Kathu village, I dashed around trying to avoid deafness and too much smoke inhalation and trying to get a photo. The guys carrying the god images are prepared - wearing sports shoes rather than sandals and certainly not barefoot like the pierced devotees. Barefoot would be asking for burns! Firecrackers are thrown and hoisted above the gods on bamboo poles. The noise and smoke are something to witness. 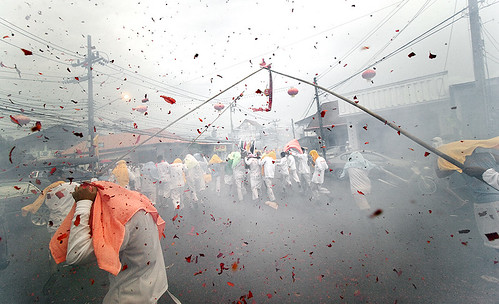 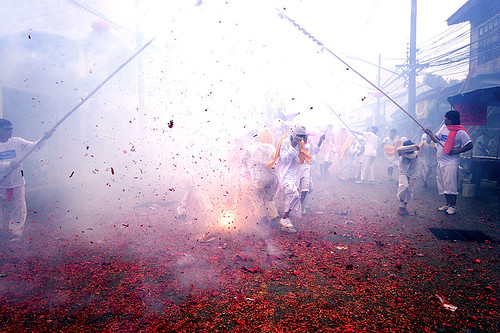 As the procession left the village that was pretty much the end of the festival for me. I did attend the fire walking event at Kathu shrine on the 16th (photos here) and very very almost lasted an entire 10 days on the vegetarian diet. By the evening of Saturday 16th I was ready for a big ol' burger and it happened that a friend's restaurant (The Lunch Room) had just been renovated and does burgers and they have big TVs to watch the English football! Farewell vegetarian festival 2010. Next year the festival starts earlier (date depends on Chinese lunar calendar), about September 27th. So, only 11 months to go!


You have been reading : Early Morning at Kathu Shrine