Hike from Karon Beach to the Big Buddha

The Big Buddha is now a much visited tourist attraction in Phuket, even though it's not finished. We have been going up the hill for many years, since work first started in about 2002 or 2003. I have blogged about the Phuket Big Buddha many times since this blog started in 2006, showing the progress of the building and the great views from the top (about 400m above sea level). There is a road up to the top, which starts from Chalong, about 1km after the Chalong traffic circle on the road towards Chalong Temple - the start of this road is about 8km from Karon Beach.

Now I know another way up! You can start from Karon Beach and walk up to the Big Buddha! I heard of this quite a few months ago from Steve, owner of the Pineapple Guesthouse in Karon. He'd walked up with a Finnish guy who lives in Karon and had found (by trial and error) a way up. The hills in Phuket are criss-crossed with paths used by locals working in rubber plantations or landowners to look after plots of land. The last hike I made up to the highest point in Phuket used a lot of such trails.

We started early to avoid the heat of the day. It was around 7:15am when we left Pineapple Guesthouse - myself, Steve and Henrik (who was staying at Pineapple and diving with Sunrise Divers). The hike starts up a small side road opposite and a few meters north of the Siam Commercial Bank, which is just 10 meters from the Pineapple. The road heads into the hills, easy to follow, passing houses along the way. Kai (our guide, the guy from Finland) lives up here so we picked him up on the way. Some of the steepest sections of the walk are near the bottom. I've been up this road quite a few times. After a while you reach a junction and a sign. Turn left at this junction... 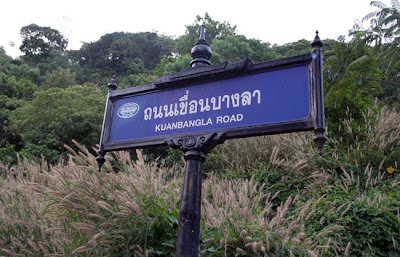 If you turn right, the road loops around and down and comes back to the main road opposite Karon post office. Turn left and you keep heading up, past some new houses and a few still being built. By this point you already start to get a sea view. There are some steep sections here, and then the trail turns to dirt and heads into the trees... 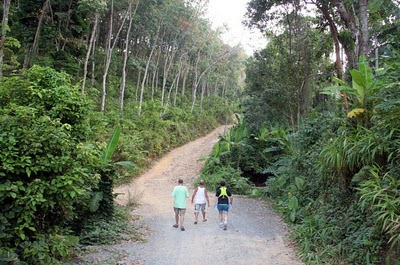 This trail gets narrower, but we were surprised to meet a moped and a pick up truck on this section when were heading down again. Lots of rubber trees up in the hills here. As the trail narrowed, we passed a spirit house on the left next to a rubber tree, and a few meters after this, a turning to the right - the first right turn you come to - we took this turning up a narrower path. Now we were really into the trees. Not exactly jungle.. I mean, a lot of the hills have been used for rubber or bananas for many years. We passed plenty of rubber and banana trees although some sections of trail were very "jungly"... 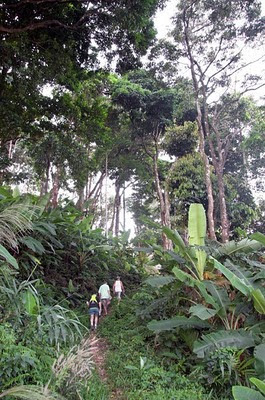 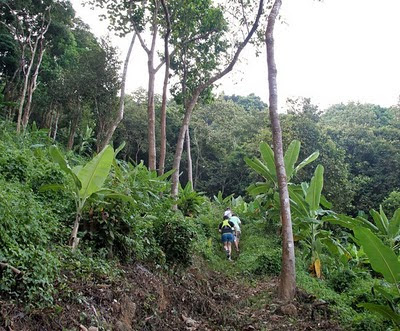 Some sections of the trail here had obviously been recently cut back, and in places the trail might not be 100% obvious, but Kai knew the way! By this time, we had some great views back down to Karon Beach... 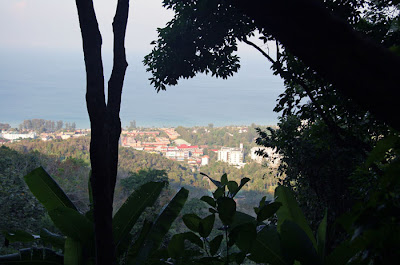 At one point here, the trail splits and you have to turn hard left - someone had pretty much barred the way in the other direction by covering the trail with branches. We then walked more or less along the hillside with a steep drop to the left without gaining much altitude for a few hundred meters. Then, you may see this tree on the left.. big roots, cloth tied around it... 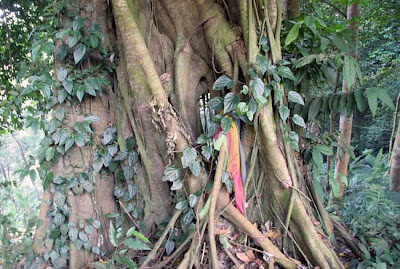 Just after this tree, which you see on the left, you turn right. At this point there's not really a trail for about 50 meters, just head UP (it's steep, you may think you are on the wrong trail, have faith).. and you come out on a very obvious path. Keep going up ... 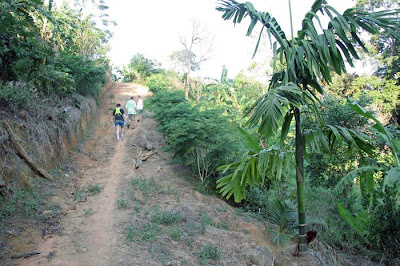 Just at the point you come out is the start of a line of small palm trees.. worth making a marker for the way down at this point. When you hit this path (photo above), turn right, heading up, and it's not too long before you meet the road... 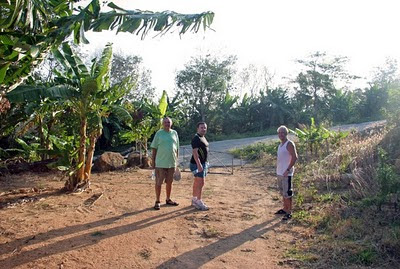 The last kilometre of the walk is up the road. We stopped to pose for some photos before the top. Was about 8:45am when we hit the summit. At this time of day, there are few (if any) visitors. We were the first at the Buddha. Getting up early is often worth the pain. 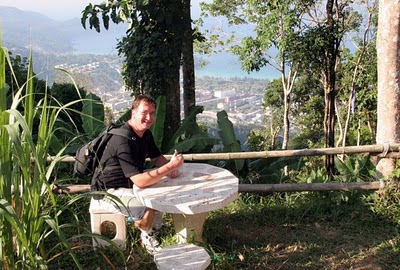 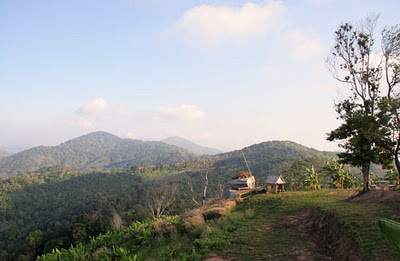 We spent a while at the top. Henrik (who had not been up there before) managed to let out a "Wow!" at the sight of the 45 meter high marble covered Buddha. I do wonder when work will ever be complete here. Could be a few more years I think. We all hope it won't be allowed to get too tacky - there are already plenty of stalls selling souvenirs, thank you. Well, at least we got there before anyone else - any tourist attraction looks better without the tourists! Even Patong Beach looks OK at 7am! 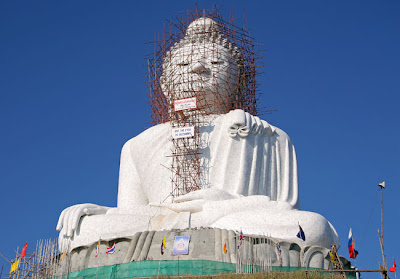 Lots of building still going on around the main Buddha image, I noticed some major changes since last time I visited - a large area of dirt behind the Buddha has now been concreted and another layer of 5 meter high lotus blossoms added around the base. The views are still great, and always will be. The view below looks east across Chalong Bay. 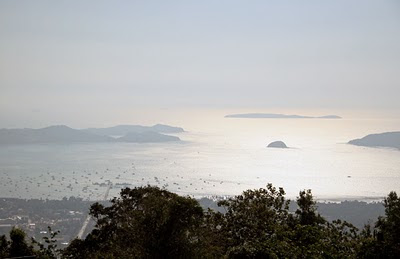 Up top I met Glenn, who I had hiked with to the 540 meter plus summit of Phuket in September.. We'd half planned to meet for this walk .. but unfortunately had met at different starting points! Glenn was fresh from a hike in the north of Phuket where he'd been attacked by a gibbon!

On the way down, Steve, Henrik, Kai and I stopped for an early beer at the Nakkerd Seaview restaurant near the top of the hill. There are now quite a few little restaurants open along the road - the Nakkerd Seaview was the first and we still like to eat here sometimes with views across Karon and across the Andaman Sea. Refreshed and slightly wobbly (I do NOT drink beer at 9am normally!) we headed down, back to Karon Beach where I enjoyed an English breakfast at the Pineapple guesthouse. The hike was a bit easier than I had imagined. I mean, it's a climb to 400m above sea level, starting at (more or less) sea level, so yes it was a bit sweaty, but starting early helped as we were hiking on the east side of the hill, out of the sun almost all the way up. Good exercise, and great views and of course walking is free - your average tuk tuk will want 1000 Baht for a round trip from Karon.

As mentioned above the hike is now easier, no need for jungly detours - updated blog post 2018 : Hiking to the Phuket Big Buddha from Karon Beach

Phuket Hills and Viewpoints
The Big Buddhas of Phuket (yes there are several!)
THE Phuket Big Buddha (the one on this page)
Karon Beach - More Information
Karon Beach Hotels


You have been reading : Hike from Karon Beach to the Big Buddha