We used to visit Kamala beach quite often, we had quite a few friends living there, we liked the quiet beach and the little beachside restaurants - we knew a couple of the owners of these restaurants too. But friends who lived there moved away to be closer to the center of Phuket. Kamala beach is a bit off the main road, and it has remained that way. Not a trendy beach, a bit of a backwater, not many bars as it's a Muslim area, and it always seemed to me like a bit of a drive to get there. Somehow, Kamala still has a quiet feel unlike any other area in Phuket and yet has quite a lot of hotels and restaurants. 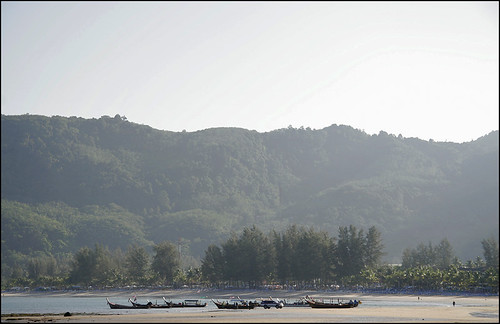 And then there's what happened on December 26th 2004. Kamala beach was hit quite hard, and took time to recover. But Kamala was not mentioned nearly as much as Patong just down the road. More talk of the tsunami on these pages: Kamala Temple, and Phuket Tsunami Memories. We were all on the beach at Kamala on December 25th 2004. So Kamala has some memories for me. Lots of "what if?" thoughts.

One morning in April 2009, I drove to Kamala in the early morning sunshine for a walk along the beach. The photos on this page are all from that morning. It's about a mile along the beach starting from the temple at the south end passing fishermen and their longtail boats, then the main beach with beach chairs and small restaurants. The northern section is very quiet, as a large part of the land behind the beach is a Muslim graveyard. There are still a few little beachside shacks selling drinks. It's not most people's idea of "busy" Phuket!

I started the walk at the temple... 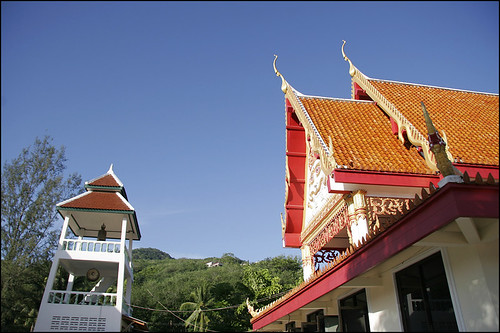 The temple end of Kamala beach is not so good for a swim, as a couple of canals drain into the sea there - all the chairs and hotels are further up the beach. Not far from the temple there were longtail boats and fishermen cleaning their nets. I guess they had already unloaded the catch - you have to wake up really early to catch a fisherman in the act! 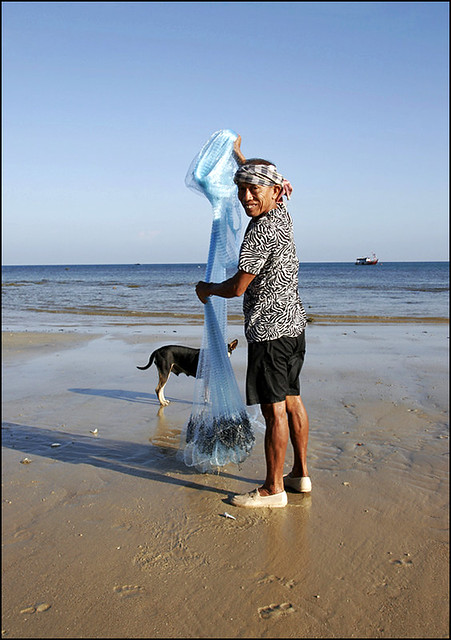 Before 9am the heat is not too bad for walking, and there are patches of shade on the beach, shadows cast by trees, not by tall buildings - you don't see any huge hotels here, even the larger hotels at Kamala are quite low key. Beach chairs were empty, although some of the restaurants were busy serving breakfast. 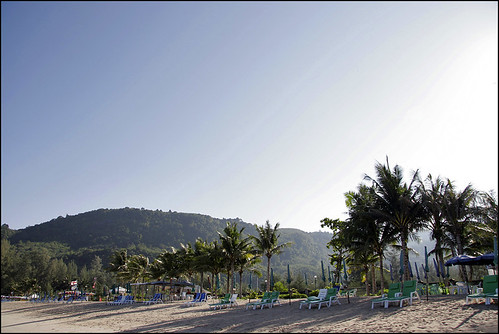 The "main drag" along Kamala beach is a narrow path lined with small restaurants and hotels. The traffic mainly passes through on the main road which is about 500 meters away from the beach. Most of the population of Kamala lives along roads to the east of the main road, rather than near the beach. The school is close to the beach, but if you wanted to see more local life in Kamala you'd have to get off the beach.. much like anywhere else in Phuket! Much of the local population lives inland towards the hills. 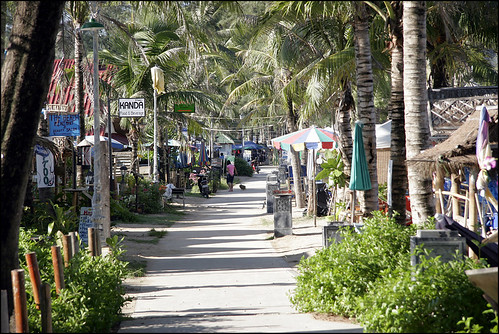 It's very low key along the beach at Kamala, not flashy or over touristy. Small restaurants, guesthouses, hotels, bars and tour desks, and all kind of holiday related things for sale. No traffic noise, no jet skis and (maybe because it was early) I was not hassled once to buy this, try that, have a drink, massage etc... I enjoyed my little morning walk. Should do it again sometime! 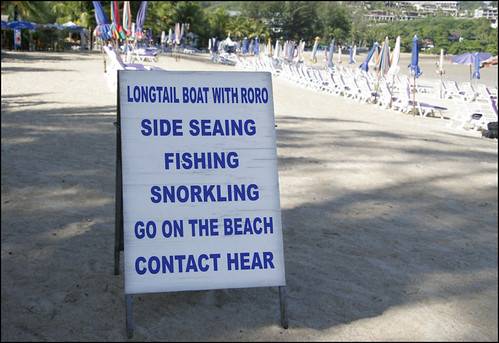 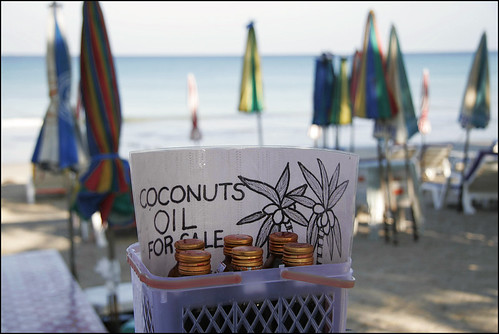 A sign helpfully points the way to the beach, just in case you hadn't noticed the sand and the blue ocean right next to you! 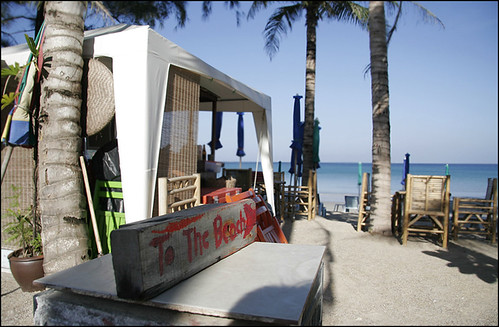 Here's one of the little beachside restaurants. Nice. Simple. Unpretentious. On the sand. There must be at least a dozen all looking similar, I can't recommend any particular one, but I would recommend heading to Kamala beach for a sunset one day, a cold beer or a cocktail and an evening meal right by the sea as the sun sets. 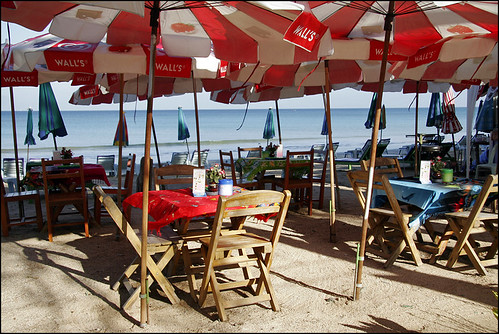 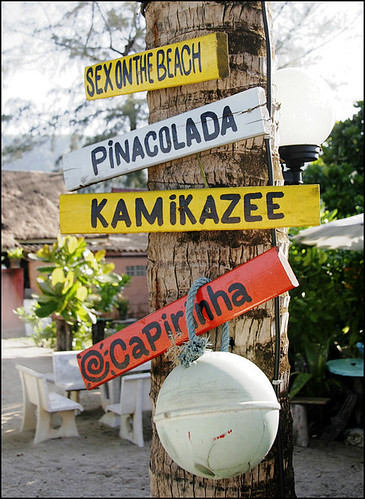 Once I reached the north end of the beach near the aforementioned graveyard, the sun was heating up. Not many people up this end but still a few little shacks selling drinks and signs to a restaurant way up at the far end of the beach where you find a shady forested area.

Kamala is like the forgotten beach of Phuket. The local Muslim community kept things quiet for a long time. When we visited friends there 7 years ago it was hard enough to buy a beer in a local shop. There was no 7-11, and the "main" road was a fairly narrow 2 lane street. Things changed a bit when Phuket Fantasea opened - Phuket's largest "tourist attraction" is just at the north end of Kamala, but on the main road, not on the beach. A wider road was needed for all the tours and minibuses coming from Patong. There are now 7-11's and some bars, some new hotels have opened in more recent years, but Kamala is still quiet. Well worth a visit even if you are not staying there, and worth considering for hotels if you want some peace and quiet... and Patong is only about 15 minutes away by car if you do need a crazy night out!

You have been reading : Kamala Beach