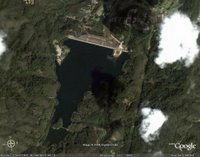 Not far from where we live in Kathu is the Bang Wad Reservoir, Phuket's largest water supply, able to hold something like 8 million cubic meters of water. The reservoir is situated beneath Phuket's highest hill (Radar Hill) above the Phuket Country Club in Kathu. Holding back all that water is the Dam. The reservoir is 1.5km long and the dam about half a mile end to end. There's a road winding it's way around the reservoir, about a 6.5km drive. Not really a tourist destination you might think, but if you want to "mix with the locals" then Bang Wad is a good place to come in the late afternoon.

Many people come up here to get some fresh air and exercise, walking or jogging along the dam, or even (for the keen ones) doing a loop around the reservoir. It's quiet and green up here, making a nice spot for a picnic too, and there's a large grassy area at one end of the dam which is made for just that. Snack and drink stalls set up selling soft drinks and BBQ pork, chicken, sausages on sticks and such. We like to come up about an hour before sunset for a walk. Good for the kids, especially baby boy (17 months old) - gets him good and tired. He tries to imitate the joggers and has quite a turn of speed for a 1 year old.

Photos on this page were taken yesterday evening. We go there at least once a week to stretch our legs and I am always interested to see the water level. There have been a couple of water shortages in Phuket in recent years, and I have seen the reservoir looking like an African mudhole. Recent projects have increased the supply to the reservoir by pumping water here from other nearby water supplies like old mines. If you look at a Google Earth image of the Kathu area to the north of the dam you can see a lot of small ponds and lakes. Right now, water level is healthy as one would expect at the start of the wet season. We had a wet week at the end of May, but has been rather nice since - see more on my Phuket Weather Blog!

You have been reading : Bang Wad Dam and Reservoir