One of our favourite areas of Phuket is Cape Panwa (Laem Panwa), located in the far southeast of Phuket. It's a quiet area, with a mostly Muslim population and it seems to us that everyone there keeps the place looking clean and neat. The main road down to the Aquarium at the tip of the island is quite pretty, which has not gone unnoticed by property developers. There are quite a few nice houses overlooking the sea, and several housing developments going on. Only a few hotels there (all very nice ones), including the Cape Panwa Hotel and the Panwa Beach Resort.

Off the main road to the right as you head towards the Aquarium you will see many small side roads. My advice is - follow them! There are some great views around here, and a viewpoint tower has been built at Khao Khad with great views over Chalong Bay. The small road along the west coast of Cape Panwa again has some houses and development going on. There is a small restaurant called The Beach Bar overlooking Chalong Bay with cheap Thai food where we have eaten many times. It's worth following these small roads in Phuket if you want to get off the beaten track. Many a time you'll find a little gem like a small restaurant, a great view, a little fishing community and you can forget that Phuket is Thailand's No.1 tourist spot for a while. The idea of my blog is to show some of these places, away from the crowds - the places where we, as residents, like to go... 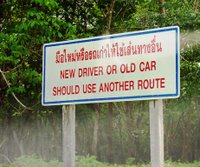 Another side road on Cape Panwa professes to be very dangerous. First time we saw this sign were worried that our car might not survive. Surely the road must be incredibly steep to justify this sign? Well, no it's not so bad, but does lead to another great view in the center of Cape Panwa over the hills and trees. You can drive around this area for half a day and still not be sure that you've found all the side roads...

At the end of the road is the Aquarium, and the Phuket Marine Biological Research Center. We've been revisiting the Aquarium for years, mainly to get our kids excited about the fish (they are). It was closed for renovation for about 2 years before opening again in April 2005 with a new walk through tunnel. Now, don't be expecting something like the amazing Blue Planet Aquarium in England. The tunnel here is about 10m long... The Aquarium has a low entry fee of 100 Baht, and is full of fish tanks containing many of the things you'd find while diving in the area such as turtles, lionfish, moray eels, lobsters, batfish, bannerfish, anemonefish, stonefish....My kids love it and I like explaining about the fish to them. 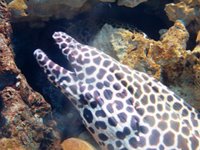 It's all very colourful and there is a good variety of marine life on display. In the tunnel tank are a few small leopard sharks, a couple of different rays and a variety of other fish. They cruise all around you and over your head...not quite as good as diving, but you do, for the briefest of moments, get the feeling of being surrounded by the ocean... There was a moving walkway when we first saw the tunnel, but that seems to be disabled now so you can go at your own pace. In my daughters case that means 60 miles an hour, then run around to the start of the tunnel and do it again, and again, and again. 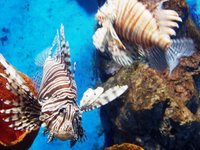 The final tank contains several huge groupers, each about 5 feet long. In all, it's not a huge place. You can easily walk around in 20 minutes, or you can spend an hour there fish gazing. Outside is a shop selling drinks and ice creams and on the road just outside the Aquarium are food stalls selling all manner of Thai snacks.

Cape Panwa makes a good half day trip with views, quiet scenic roads and the Aquarium. It takes about 30 minutes to drive there from Chalong, about 45 from Kata, about 45 from Patong. Only 25 minutes from my house, which is located in Kathu, the center of the known universe :)