Most of the time, if we eat out, we eat at cheaper Thai restaurants or local seafood places. We like the kind of places where we can all eat until stuffed and the bill won't be more than 1,000 Baht for the family, normally much much less than that! We tend to avoid restaurants for tourists or places that only sell "Western" food. Partly because I am a cheap skinflint, partly because we don't like "fancy" places where you pay for the appearance rather than substance of the food. Best Thai food is to be found at local restaurants that don't worry too much about presentation. However, of course now and then we do fancy something a bit different. I have an English belly and it seems my kids have inherited this too, mixed with my wife's absolutely Southern Thai belly - her favourite food is Gaeng Som, a very spicy and sour curry.

Anyway - Wine Connection is a big chain of stores all over Thailand. They started off selling wine. The first store in Phuket was in the Chalong area and there are now lots of branches in Phuket. I am not a wine person, but I have bought wine there quite a few times for parties. They expanded a few years back and started doing restaurants. I always thought of it as an expensive place for expats and "Thai people trying to be fancy" to eat, and we'd not eaten there before last week. We had gone to the Central Festival mall (just outside Phuket Town) to watch a movie, then found that the movie we wanted had stopped its run the day before. My daughter mentioned Wine Connection, and I found out she had eaten pizza in there with some friends .. not too expensive she said. So we went to have a look... 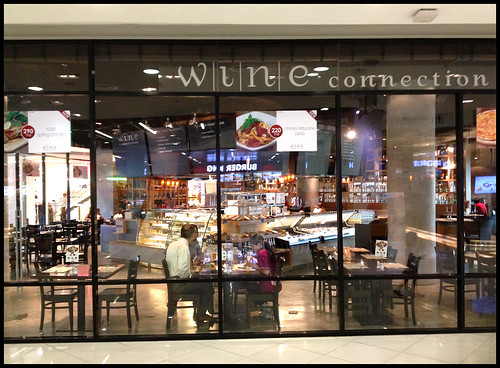 (above) Outside Wine Connection in the Central Festival mall

A quick look at the menu outside .. Pizza starting at 170 Baht, pasta dishes around 200 Baht, and lots of meaty things (lamb, steak) at higher prices. No Thai food. The pizza and pasta seemed very well priced. My daughter assured me the pizza was good, so we thought we'd try. If you convert these prices to my old UK pounds, it's cheap - just over 3 pounds for pizza, 4 pounds for pasta. Yeh, if you are on holiday, Thailand is very cheap! We ordered a pizza each for the kids (are you sure you can finish it?) and I ordered fettuccine with chorizo. Drinks? Very happy to find some German Weissbier on the menu (which cost nearly as much as the food, but what the hell, we're here now!) 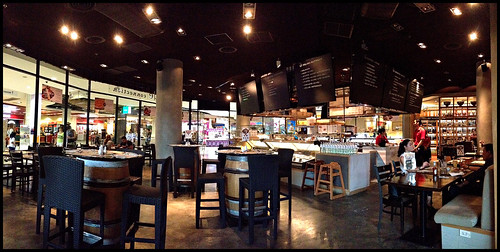 (above) Inside Wine Connection

Food came very quickly, but then again it was just before midday and not at all busy. My pasta arrived first and I was actually surprised by the size of the plate - often these slightly fancier restaurants have artistic, but small portions. The pasta was very tasty and went down very well with a German bier (yes I know it would go better with wine, but ...) 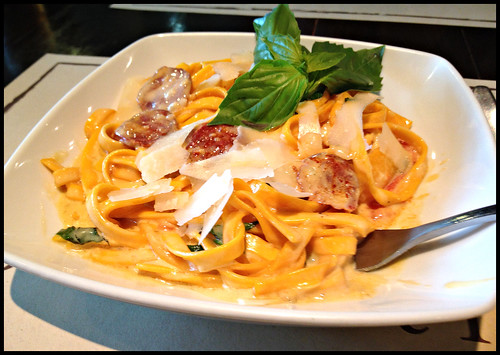 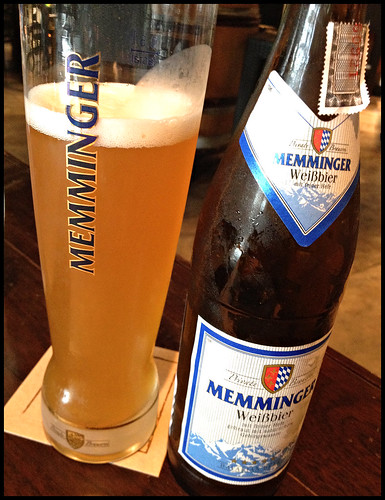 (above) My lunch - Fettuccine with chorizo and some very nice beer :)

The pizza is a kind of litmus test for me. I like pizza. I like good pizza. I can happily stay away from chain pizza places like Pizza Company. The kids got their pizza, and of course Dad took a slice to check the quality. Looks good, tastes good, thin and crispy, plenty of cheese. And of course the kids had no trouble finishing off the whole thing, they eat like horses! 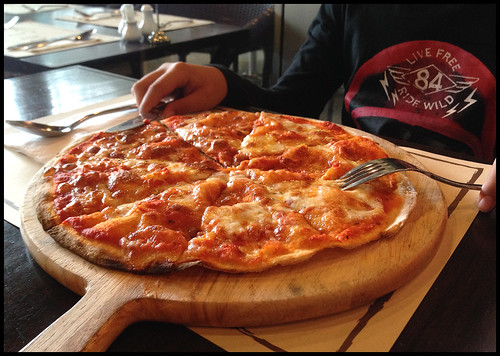 Wine Connection is now on our list :) Actually the pizza was better and cheaper than Pizza Company. Bill was 880 Baht for 3 people - my wife skipped, she had her curry waiting at home :) There are several places we eat semi-regularly in the Central Festival mall. Often we use use the food court (3rd floor, same floor as the cinema) Wine Connection is on the 2nd floor, same as many chains like Burger King, KFC etc.. We have eaten many times at the Fuji Japanese restaurant, and also the Zen Japanese restaurant. Many people come to Central at the weekend - a good hideout in the aircon on a really hot day, and a place to go on a rainy day! Shopping, a movie, a good meal, Phuket has certainly embraced the mall culture :) I'm not saying we spend that much time here, but we can't go out exploring every weekend!


You have been reading : Wine Connection Restaurant