Update March 2018 - Uber is now leaving Thailand and has sold out it's operations to Grab.

Update November 2015 - Looks like Uber is no longer operating in Phuket. They are still in Bangkok.

If you need transfers from/to Phuket Airport or anywhere else in Phuket, or tours - I suggest contacting my friends at Easy Day Thailand.

And read more on this blog about Taxis and Tuk Tuks in Phuket.

I figure this is worth a mention, although from reading around the internet it seems that Uber and other app-based taxi services like GrabTaxi have their fans and haters too! These apps have been around a while - Uber started in the USA in 2011 and already started in Bangkok in 2014. I know that in Europe there have been protests from established taxi services who claim these apps to be illegal, I am not sure 100% how they work in different countries, but in Phuket which has had all kinds of taxi problems for years, I would say anything that adds a new option has to be good, even if the prices don't go down yet. Phuket taxi fares tend to be quite high, especially for shorter trips. Doesn't really look like Uber is cheaper, but it's the way it works that might be useful for some people especially if you have used it before in other places.

Taxi choices for most visitors to Phuket currently extend to tuk tuks and normal taxis. There has been plenty of work done in the last year to take illegal taxis off the streets (like a car parked outside your hotel with a cardboard "taxi" sign on the roof). There was a big drive to make sure all local taxi drivers are registered and insured and have the proper licence. Official taxis should also have the drivers name on the door. There are also some meter taxis, mostly doing airport runs, but very few around the beach areas where "taxi mafia" groups have long controlled certain areas. Again earlier this year using military authority there was a big crackdown on the taxi gangs with quite a few arrests being made. The arrival of something like Uber seems good to me.

Uber is an app you can download to your phone/iPad or PC, but it needs to be able to read your location, as the app connects you do the taxi, so the driver knows exactly where you are and you can see where the driver is, plus you can check your location as you are driving, very useful in a new place! You can sign up online here (the link is https://get.uber.com/invite/uberjamiesphuket), which includes a special promo code for a discount on your first ride. If you download the app, enter the promo code uberjamiesphuket. I have checked out the app, but have no particular need to use it here in Phuket since I live here and have my own transport. Need a holiday now to another location where Uber is online so I can try it!

Here's a screenshot from my phone (below), what you see when you are using Uber. You can choose a pickup location and see where Uber registered vehicles are located. I have selected a location on the beach road in Patong and can see 3 different cars available. 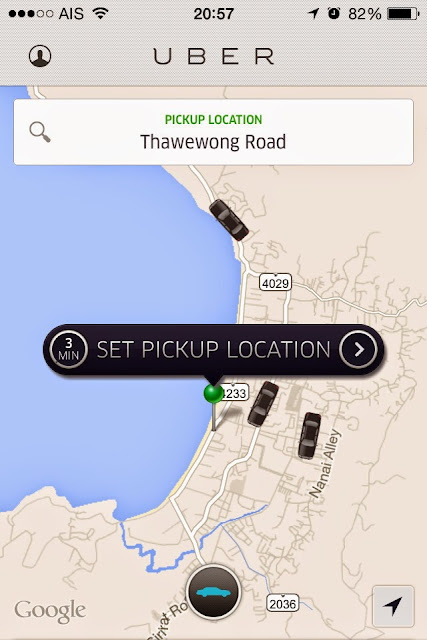 You then set the pick up location and tells you the estimated time for pick up and you can get a fare estimate for where you want to get to or enter a promo code. Then you hit the Request Uber button (See below). 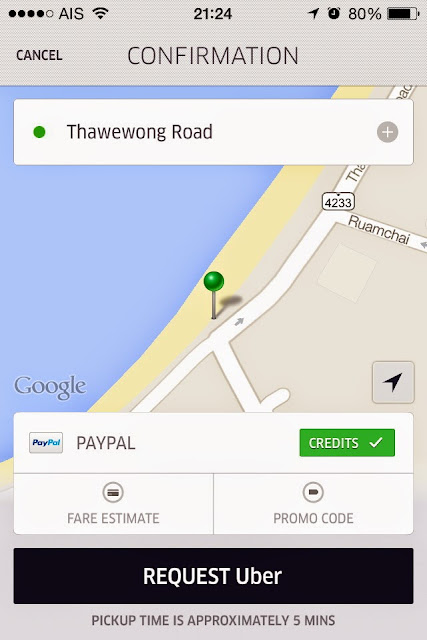 Seems very simple. When you sign up for Uber you select a payment option - credit card or Paypal are options. I chose PayPal. No cash needed. Apparently cash is not an option. Some people like that, some people still like cash! No need to tip either, although I guess that depends on you. If you check the Uber Website, it says (in the small print) "No need to tip". There's a flat rate 950 Baht to the airport from anywhere which is cheaper than local taxis charge in Karon or Kata, so a tip might be OK!

Oh, so how does it work? I wondered that too, so I met Warren, the Uber representative for Phuket and had lunch and a chat. So it's not just any old taxis or "some guy with a car". Uber does not employ drivers. It's local taxi drivers who sign up for the app themselves to be drivers. Not all are accepted. Uber wants nice, friendly, well dressed divers with nice cars like a Toyota Camry or Fortuna or Honda Civic. They started with a few limo drivers and it seems word of mouth helps spread the word among the drivers. So you can be sure all drivers are legal. Uber is not their job, just another way for them to get customers, not just hanging around on a street corner or outside a hotel shouting "taxi!" at anyone passing by. I'm not quite clear how Uber makes much money out of this arrangement though! Surely the lions share of the fare goes to the driver?

Anyway, I hope I have a chance to try Uber myself sometime. There is one other important point - after taking a ride with an Uber taxi you can leave feedback and a rating for the driver. Warren told me that if drivers get a few bad ratings, they get removed from the app. That should ensure that only the nice polite drivers are available on Uber. Of course many Phuket taxi drivers are very nice. We have a nice guy outside our dive shop most days called Mr Teep. But people's experiences with taxis and tuk tuks in Phuket are mixed - I wrote about this earlier this year - see Phuket Taxis and Tuk Tuks - Your Opinions. I reckon Uber might well be used here by people who already use it and maybe if you have not tried it, give it a go! Just to repeat - you can sign up online here or if you download the app, enter the promo code uberjamiesphuket. Either way gets a discount on the first ride. Good luck to Uber. Something new is needed in Phuket. Ideally I'd like to see more buses, especially I'd like to see bus services between the beaches (there are not any right now), but anything that challenges the status quo will do!


You have been reading : Uber Taxi App Now Available in Thailand