Not quite sure if this viewpoint has an official name, but it's easy enough to find. Look for the big white wind turbine on the hill by the sea just south of Naiharn Beach. For sure I have been up here quite a few times before, but last week I realised that I had not been for a drive around the Naiharn area for ages. With the sun setting at around 6:45pm in August I decided to head down that way from my work at Karon Beach. Not a long drive, past Kata Beach and then on the coast road passing the After Beach Bar and the well known Karon Viewpoint after which the road drops inland heading towards Naiharn Beach. The roads here are small and there are lots of shortcuts that I don't know. It's easy to drive round in circles, though there are a few street signs. The area inland from Naiharn has become much more developed in the last 6 years. I mean, it's still quiet but there are a lot of new houses, bars, restaurants etc... When you get to Naiharn lagoon, you need to be on ths south side of the lagoon, then 2 minutes up the hill to the wind turbine. Parking is easy on a scooter, less so in a car, not much space up there. 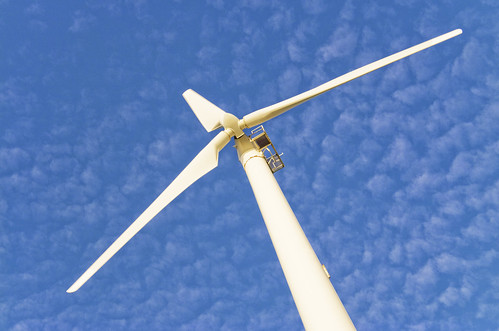 (above) Look for the big wind turbine on the hill near Nai Harn Beach. Yes, it's a wind turbine. Not a windmill although so many websites call this place 'Phuket Windmill Viewpoint'!

When I got up there I was very pleased to find someone paragliding. This spot is often used by paragliders and there have been a couple of competitions. More information at www.phuketparagliding.com. So my camera was quickly in action! There were quite a few people up there watching or just enjoying the views, mostly local people. This viewpoint is not promoted as much as Phromthep Cape or the previously mentioned Karon Viewpoint. The guy who was paragliding took off from the hillside that falls steeply down to the waves about 40 meters below. The wind has to be just right, and on this beautiful low season day with a light wind blowing from the west this guy was able to fly. 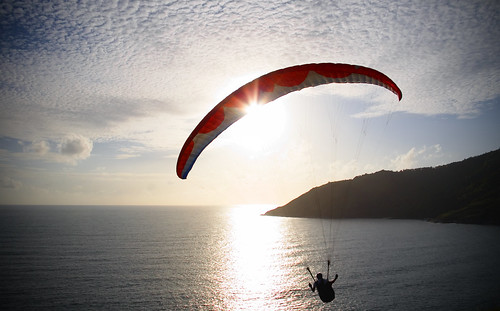 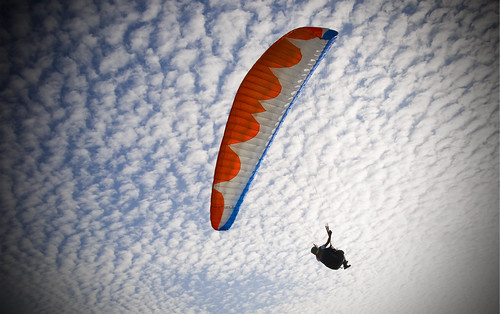 I don't know how often there are people paragliding. About 15 minutes after I arrived, this guy was packing up so I was lucky to see it. Then I could concentrate on the views! The coastline of Phuket has some great views, all around the island. To the south of this viewpoint you can see Yanui beach, a very small quiet beach which has a few bungalow operations. South of Yanui is Phromthep Cape. you can't quite see the tip of the cape from this viewpoint. You can also see a small uninhabited island called Koh Mun just off the coast. 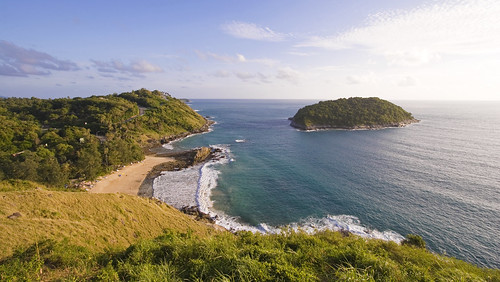 And a close up view of Yanui beach. We've not been to Yanui for years. I recall going when our daughter was small and enjoying a drink at a cafe with my parents. We climbed on the rocks and looked for marine life in the rock pools. Yanui beach was battered by the tsunami on December 26th 2004. I know everything is all rebuilt, but if memory serves, we've not stopped there in all that time. 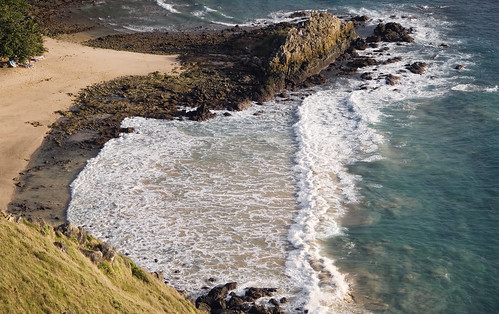 With the paraglider out of the way, a local man was preparing his remote controlled plane for take off as the sun sank towards the sea. And all this time another guy had been quietly playing guitar. 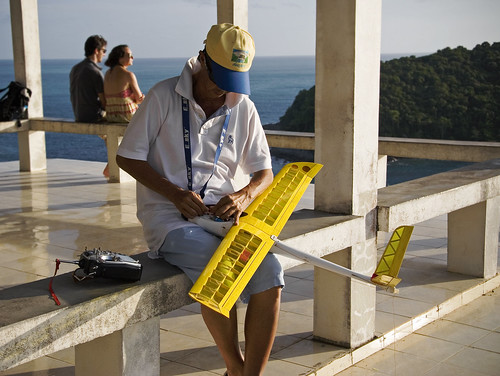 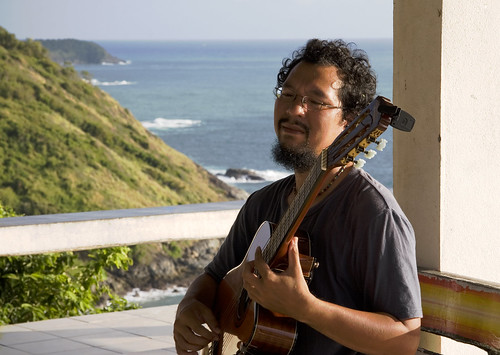 And here's the guy with his remote control. The little yellow plane is out there somewhere. I tried to take a photo with the plane in frame but it zipped past too quickly. You can just about see Naiharn beach in the background behind the guy. 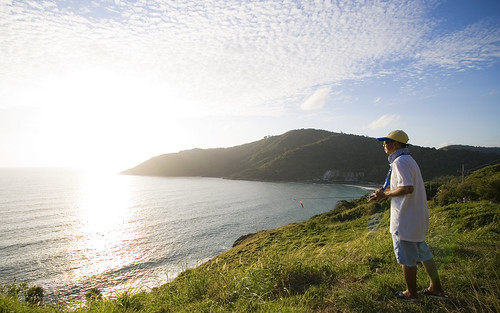 Well, it was a very nice evening. Low season is like this sometimes, you can have days that are as good as any high season day, mixed in with some less-good days! Below - the view looking west from the "wind turbine (not a windmill) viewpoint" or whatever it's name is - blue ocean, blue skies. Everyone says "go see the sunset at Cape Phromthep" - yeh, you and 1000 others! Phromthep is very nice, but just about anywhere on the west coast is good for a sunset. 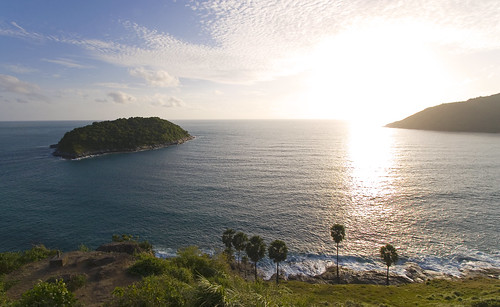 
View Phuket Hills and Viewpoints in a larger map


You have been reading : Naiharn / Yanui Viewpoint (aka the Wind Turbine Viewpoint)