Update August 2013 - This place has Closed Down. Shame!

We recently found a restaurant that suits us very well - close to home, close to school, I drive past it on the way home every evening, it's a good price, location is pretty quiet, food is tasty. And much as I dislike the phrase.. Deli Steak "ticks all the boxes". It should be clear from this blog that we don't go for fancy restaurants very often, and normally when we eat out, it's for Thai food. If you want a steak, you normally have to pay "farang price" / "tourist price". And I know there are some very good steaks in Phuket, for example at La Boucherie in Patong, or at Norbus in Rawai, or at the Pacific Club in Karon. And some people like to eat such food when on holiday, though for me, part of travel is to experience the local food - though that does not mean you have to try oddities like fried grasshoppers or soup made with congealed blood - up to you. I am still trying new foods even now - there seems to be an endless variety of Thai food. BUT for sure I like non-Thai food, and an opportunity like Deli Steak has to be taken!

We noticed signs up saying "Steak 59 Baht" close to the Prince of Songkhla University in Kathu.. and normally I'd ignore it. A 59 Baht steak? yeh, it's going to be poor quality buffalo or something... But then my wife and a friend tried it with the kids, and told me it was good. We've been several times in the last couple of months - had a delicious honey pork chop there a few days ago (99 Baht). The steak dishes (chicken, pork, beef) start at 59 Baht, most are 79 - 99 Baht, some of the beef a bit more, up to about 149 Baht. 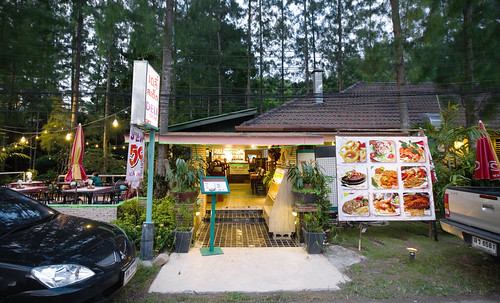 Location - hard to find even if you know Phuket, since the road is not used by so many people. It's called "Muang Chao Fa" road and is a shortcut from Kathu, past the Prince of Songhkla University campus, winds through the greenery and ends up next to a new Honda dealer on "Chao Fa West" road which runs from Phuket Town (Central Festival Mall junction) past Chalong temple. Yeh, needs a map. The photo above shows the front entrance by the road. Not much space to park. Room for a few cars to squeeze in by the side of the road.

It's a relation of the Deli supermarket in Patong where many foreigners go to buy essential non-Thai foods! Same owners as this restaurant, which is clearly aimed more at locals than tourists. With the right price, good food and a bit of word-of-mouth advertising, they are doing well. Always other people eating there when we have been, mostly Thai people. It is next to a road, but this shortcut road is not that busy, you don't notice any noise really and the restaurant has lots of greenery and a water feature (a pond with a little fountain) which helps to make it seem quiet. There are tables inside and outside, only about 10 tables in all. 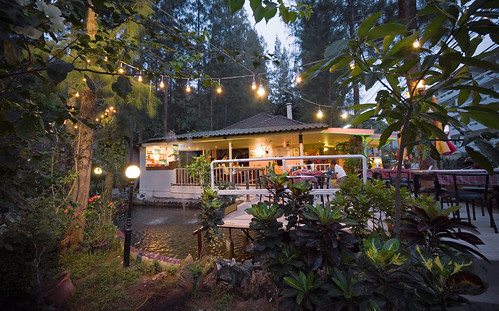 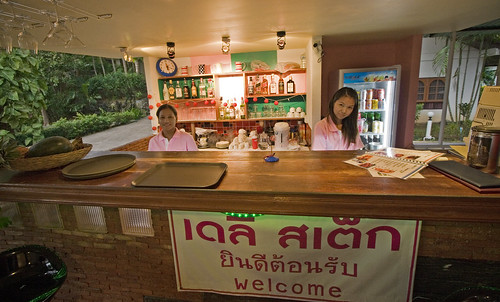 And the staff are very friendly. They have mixed my order slightly twice already, probably due to my bad Thai. Mind you, when I got a beef tenderloin instead of a pork steak I didn't mind... The meat is all good quality from their supermarket. Lots of variety with different sauces. There are also loads of side dishes you can get - mashed potato, chips, onion rings, salads. Here's a couple of typical plates: 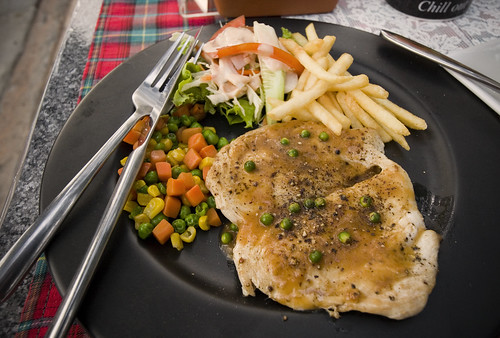 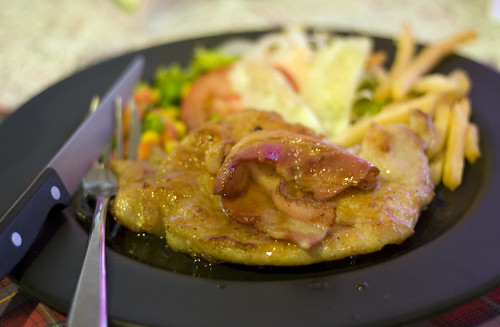 That's a chicken with pepper sauce and a honey pork chop. All steaks come with fries, salad and some mixed veg. I've not had a bad one yet! And here's a side dish of mashed potato with gravy - a fair size portion and only 19 Baht... 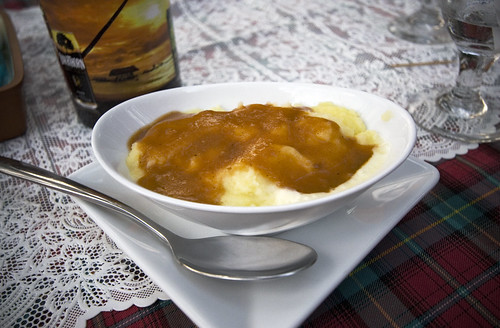 Add in a cold beer (45 Baht for a Chang) and it's a deal. We went along with some friends a couple of weeks ago. John, who is a hotel manager and tends to eat quite often in nice hotel restaurants, reckoned the food at Deli was better than at many (much more expensive) hotels. For sure the same food in Patong would be double the price. Glad to have found this place. Maybe not so easy to find for visitors, hope the map helps... but for us, very convenient as we use this backroad pretty much every day!


You have been reading : Deli Steak Restaurant