On Saturday (10th July 2010) I went along to the 4th annual Phuket butterfly release - I had not been to (or even heard about) the previous 3! Yes, this is another very local event which is not promoted to tourists, something that only those "in the know" will know of. Might change a bit next year. During the event which is organised by the Phuket Butterfly Garden, I talked to the director Mr Jaipet Hatthakham - he'd like to make the event bigger.. well, if you are in Phuket next July keep your eyes open!

I heard about it from Tim who works at the Cape Panwa Hotel and is also keen on local events, and also does a blog. He mentioned it to me a couple of weeks ago when we met in Kathu Village at the local festival there. The butterfly release was also mentioned in the Phuket Gazette a few days ahead of the event. I did not think there would be many foreigners there (and I was right, aside from me and Tim I counted half a dozen more), but also I did not realise that this was such a big local event. There were hundreds of people there, lots of school kids, the regional TAT director and other important local folks attended too.

It took place in the Khao Phra Taew forest area of Phuket in the northeast of the island. I drove up, turn right at Thalang on the road to Tonsai waterfall - in fact I thought it was taking place at the waterfall, but fortunately a left turn was signposted and the narrow winding road through the rubber plantations had signs every few hundred meters. 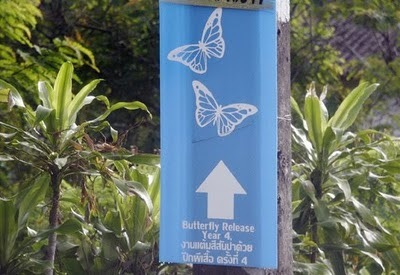 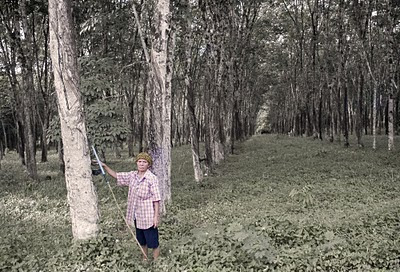 (above) I stopped to snap a quick photo of a worker in a rubber plantation - the north of Phuket is full of rubber trees, one of the main industries in Phuket before tourism started becoming important... and rubber is still big business here. 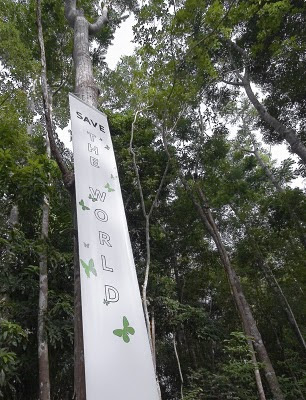 When I found the site of the release I was surprised by the number of cars parked, a bigger event than I had anticipated. The trees were adorned with "Save The ..." banners, there were displays showing caterpillars and cocoons and butterflies, an A/V presentation about the lifecycle of the butterfly, a stage where girls with cute butterfly wings on their backs were making announcements, and a line of covered cages containing the butterflies to be released. School kids everywhere. 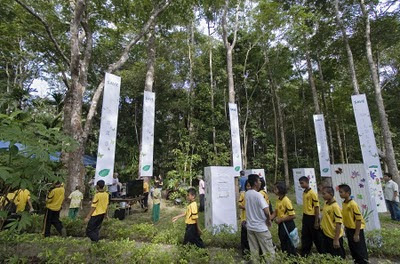 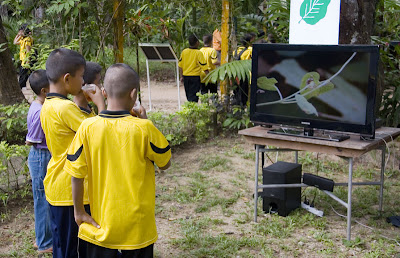 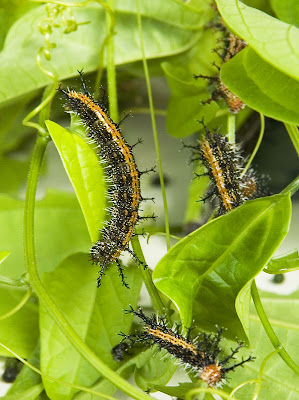 Tim's daughter (he told me) is a big butterfly fan, and she could not resist a look under the covers at the cages full of butterflies that would soon be released into the forest. I reckon maybe I should have dragged my kids out of bed, but the event started at 8:30am, on a Saturday.. and after a long week at school, Saturday is a day for a lie in! 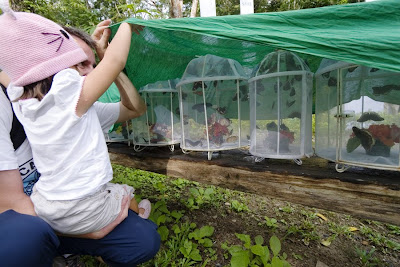 The butterfly cages were moved into the trees and hung up on hooks. It seemed each cage had a sponsor and as the release approached it seemed the thing-to-do was have your photo taken with the butterflies... 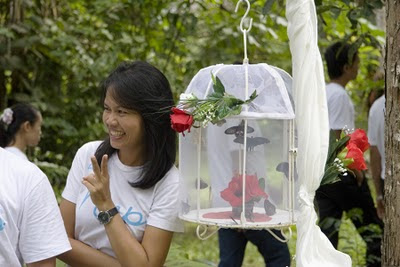 The actual release... I had in my mind a picture of thousands of myriad coloured butterflies pouring into the sky, a vortex of wings, a fountain of fluttering (excuse my bad poetry)... I had seen somewhere some mention of the word "thousand" but seemed like there were maybe a dozen cages with maybe 20 butterflies per cage, and I think that makes quite a lot of butterflies, but not a thousand. Anyway, as the director said - next year will be bigger. Butterflies flew out of their cages as they were opened after a countdown (ha, sii, sam, song, neung) and some were helped out.. Tims video (see links at the end of the page) shows his daughter helping some butterflies to freedom. 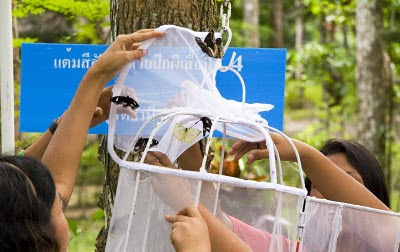 And with the butterflies flying freely, I snapped a few photos... 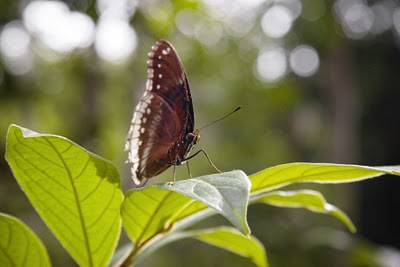 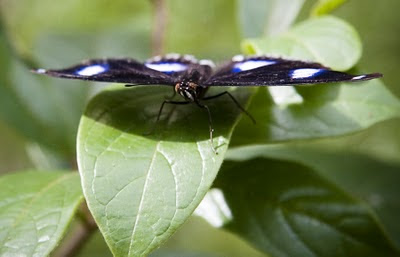 And there was the usual young kid, not sure quite what to make of the very big farang, while mum tried to persuade her to give me a smile! 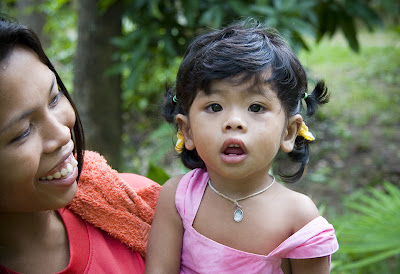 The butterfly release had environmental messages, not only the 'Save The World' banners on the trees. Along with the release was a tree planting ceremony with the kids taking a leading role and very proud they seemed of their saplings. 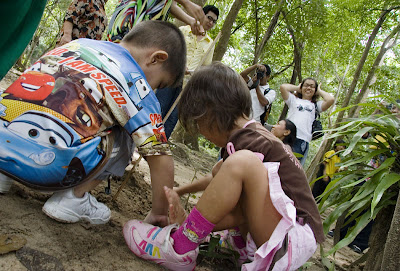 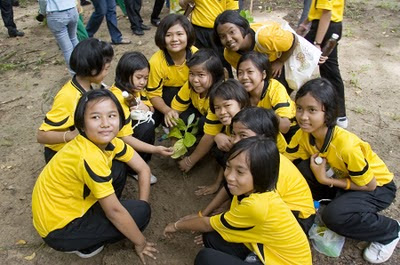 And then these girls dressed in butterfly wings, the "emcees" for the event wanted their photo taken with me. I obliged. Thais are becoming like the Japanese with their snapshots. Wherever you go.. and don't forget the V sign. 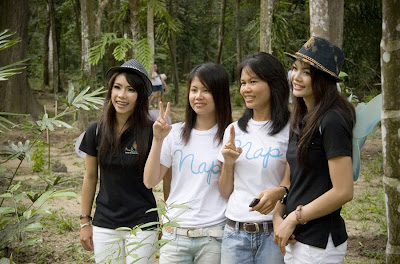 Yes, it was a very local event. But with a message. Phuket should listen to the message. The island has had huge development in the 10 years since I arrived. I think it has peaked now, and while many seaview plots are overfilled with villas and apartments, an area like Thalang is still very rural - it's all farms, rubber trees, palm trees and pineapple groves around here. I hope Phuket can retain it's huge green spaces. I mean, Patong is already gone of course, but.. I'm rambling. Hope to attend next years butterfly release too. I love these kind of events and sure I miss them sometimes, as the promotion is minimal. Gotta keep your ears to the ground!

• Video of the butterfly release by Tim


You have been reading : Phuket Butterfly Release