Happy Birthday to me! Last Thursday (4th March) was the big day. I tend not to celebrate the passing years, but this year enjoyed a great day out on the water playing with speedboats, cameras and a helicopter.... Background: I am manager at Sunrise Divers, based at Karon Beach in Phuket. The owner bought a very nice speedboat last year and we're going to offer the boat for private charters - not diving, but cruising, sightseeing, getting out to offshore islands, off the beaten track a bit. The boat is called Sky Water, it's a Sea Ray 26 foot sports boat, top class, very nice.. not your average Thai speedboat. It's available for charter for up to 4 people.. can squeeze in a couple more, but it's not a huge boat. The waters around Phuket are dotted with small islands. Some are very popular like Phi Phi or Koh Khai. Other islands are less well known. The Sky Water can take you wherever you want. Damn, I want one too!

On Thursday, we had arranged a day at Koh Rang Yai, a small and very nice island just off the east coast of Phuket. The Sky Water is based at the Ao Po Marina in the northeast of Phuket.. the photo below shows Gilbert (owner) and Sky Water at the marina... 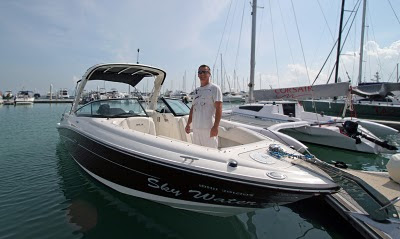 It was just 15 minutes cruise to reach Koh Rang Yai. The day was all about photos. We met the guys from Helicam at Ao Po. Helicam specialises in taking aerial photos amd videos. They do boats, hotels, private houses and much more and get some amazing photos - their website is www.helicam.asia. It happens that I know Phil, one of the owners, as our kids go to the same school. On Thursday Phil was joined by Khun Moo - Phil is the helicopter pilot (remote control) and Moo the photographer.

Enough talk! I took some pics on the day from the shore and from the boat. Firstly - Koh Rang Yai is a gorgeous little island... 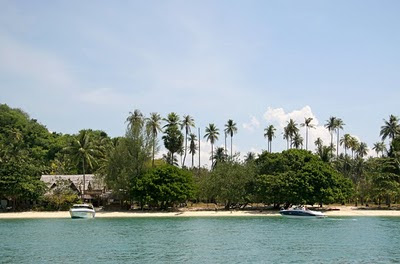 We cruised in to the beach and unloaded the Helicam gear... helicopter, remote controls, batteries, and other fancy electronic gear that was beyond my ken. Phil got the copter ready on the beach. It can take off and land pretty much anywhere. Phil preferred to use the beach, but later we managed it from the back of the speedboat :) 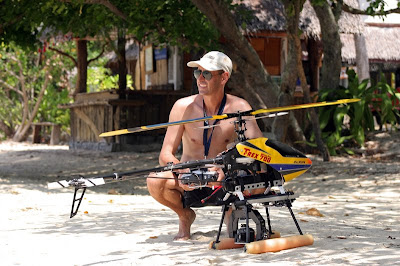 The helicopter can't stay up for too long, about 15 minutes is the limit on a set of batteries. We planned 2 runs - the first getting aerial shots of the boat and the second with wakeboarding. I stayed on shore for the first run, as we didn't want too many people cluttering the boat. I have a 300mm zoom on the camera so got a few good pictures of Sky Water and the chase helicopter... 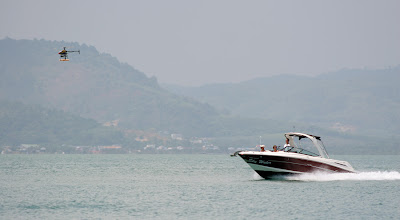 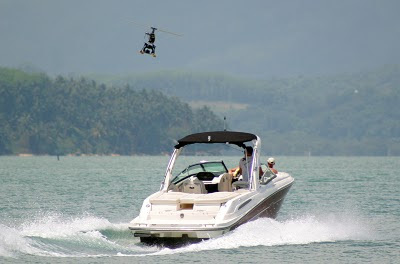 You might notice the hills and shoreline behind the boat... the East coast of Phuket is very different to the developed beaches on the West coast. You can get to Koh Rang Yai easily by longtail boat from Laem Hin.. or by chartering the Sky Water :) After the first run, Phil landed the helicopter at the beach - the hat in the foreground is Phil... 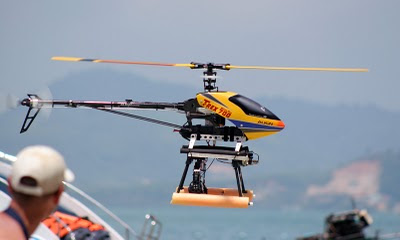 For the second photo session, Gilbert wanted to try something new... photos of him wakeboarding taken from the helicopter. This was new for the Helicam team too! I'll post some of the final photos that they got in a couple of days... I was on the boat, Gilbert in the water and Phil somewhat apprehensively launching the helicopter from the back of the speedboat - not much room to manoeuvre... 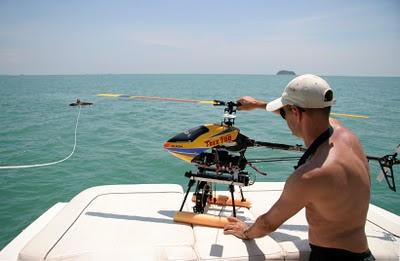 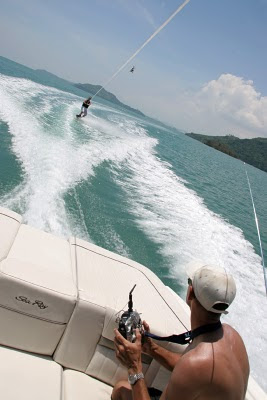 The boat captain upped the revs, Phil piloted the helicopter behind Gilbert on his wakeboard and we flew past the beach a couple of times. Now, Gilbert's not a wakeboard champ, but enjoys a bit of a go - anyone chartering the Sky Water or a similar boat can also do some watersports - there's plenty of quiet water on the East coast of Phuket, ideal for a quick wakeboarding session. I took some photos from the boat... waiting for some pics from Helicam.. and (I have seen some previews) they are good. Great company they are, Helicam - if you want aerial photos, check their website: www.helicam.asia. 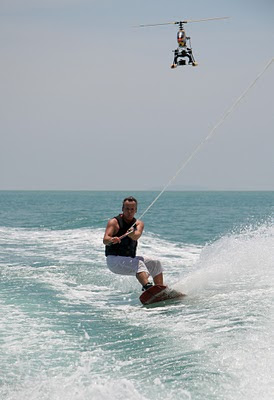 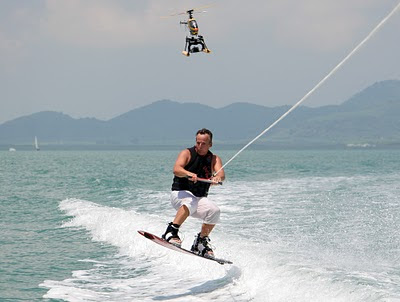 After the photo session we threw the anchor, swam ashore and had a couple (ahem, I had more than a couple) of beers and some food at the restaurant at Koh Rang Yai - food is tasty, also not cheap at all! Well, occasionally Paradise is worth it - you can stay at Koh Rang Yai in simple bungalows for 1000 Baht per night. After the drinks we carried the Helicam gear back to the boat and sped back to Ao Po in the afternoon sun. In this weather, a day on the water is always a pleasure. And yes I got a bit too much sun, but since I work in the office 6 days a week, too much sun is a luxury!

Here's a few of the great shots from the Helicam helicopter : 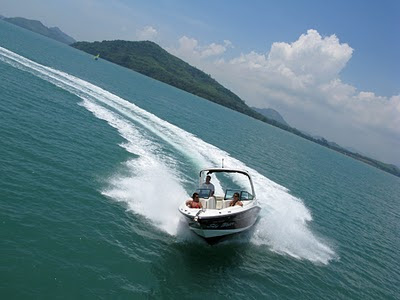 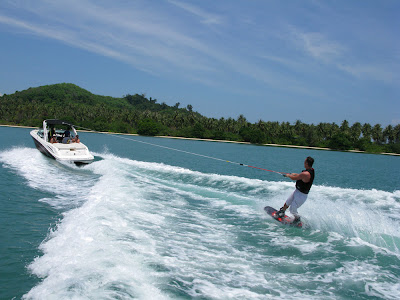 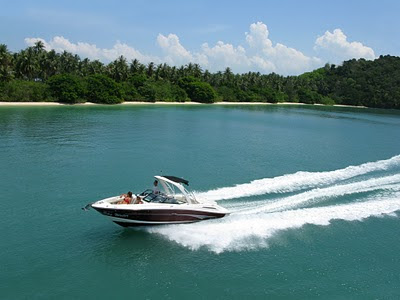 
You have been reading : Speedboats and Helicam aerial photography