The Phuket Tin Mining Museum in Kathu district is now open (more or less). There is still work continuing, it's not 100% open, maybe by the end of 2010, but anyway, I decided to go check it out with my kids on Saturday. It's not the easiest place to find unless you know the back roads. Coming from Kathu you have to take the back road around behind Loch Palm Golf Club that heads through the hills to the British International School. It's often used by taxis and minibuses as a shortcut between Patong and the airport. I guess the museum was built here because they needed lots of land, so had to find a place where land was not too expensive.

• Update - I blogged the Phuket Mining Museum again in January 2011 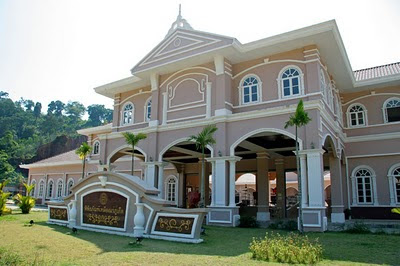 It's been years in the making. We first went to have a look more than 2 years ago - you can see a photo here on my weather blog. That was October 2007, the main building was ready and it looked like the museum might open in 2008. Since then we have looked in several times to see if anything was happening - we use the road as a handy shortcut from Kathu towards the north of Phuket.

So now it's January 2010 and I am happy to say you can now visit the museum, and happy to say that I think they have done a very good job - we'll be back for sure later in the year. There were not really any staff around when we went. A guy gave me a ticket with a 200 Baht price and charged me 100 Baht, free for the kids. Another older guy wandered around and showed us a few things and opened up a door to a display that seemed shut and shouted at someone to turn the lights on! There were actually a few other visitors, but given that the museum has cost 50 million Baht to build, it's going to need more than a few tourists to pay that back!

I am also happy to say my kids enjoyed the museum - I was worried they might find it boring, but actually there is a lot to see here. We started just inside the entrance with some rooms full of antiques and photos. The museum building has been built in the old "Sino Portuguese" style that is common in the older areas of Phuket Town. 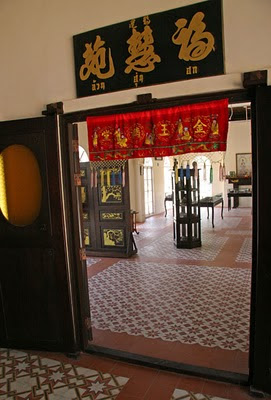 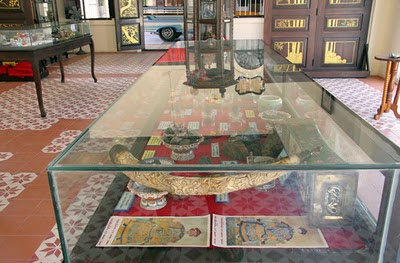 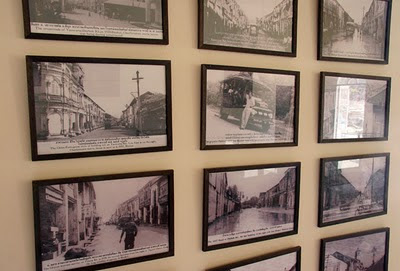 Then we entered the geology section... maybe my daughter will be a geologist... although I did get calls of "Boooring!" when I started to explain about Igneous, Metamorphic and Sedimentary rocks :) This section of the museum is educational with displays about rocks and evolution and such. 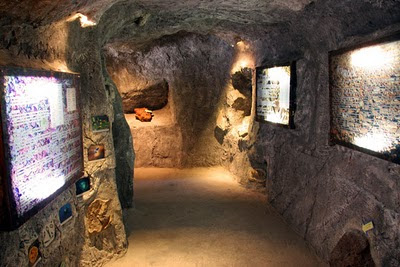 My kids, bored with the difference between intrusive and extrusive igneous rocks, walked off ahead, only to come back screaming with fear and hiding behind my back.. I wondered if there was a snake or something around the corner, but no... 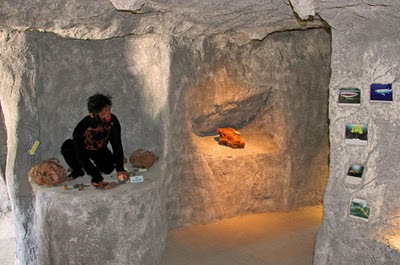 It was a scary caveman :) Around the next corner we started with dioramas showing early mining techniques progressing to more modern tin mining methods used in Phuket. It was tin mining that made Phuket a rich area, as well as rubber plantations, fishing and the fact that Phuket was an important trading post. Tourism is bringing new wealth, but Phuket has a lot of "old money". Tin mining was an important industry in Phuket since the 18th century. The last mine closed in 1992. 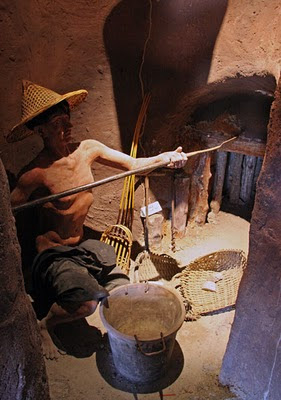 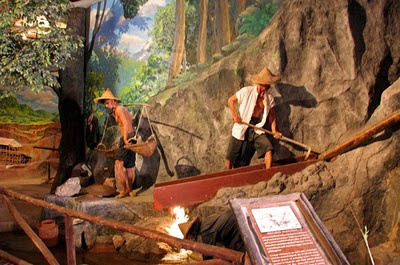 The miniature diorama below shows an open cast mine, Many of the mines in Phuket were like this - you cannot see any now, or can you? In the Kathu area there are many lakes and ponds - all were former tin mines. My kids liked this display - just like the mini people in the movie "Night at the Museum" :) 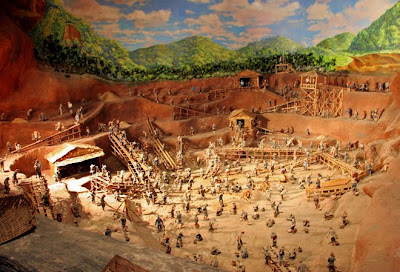 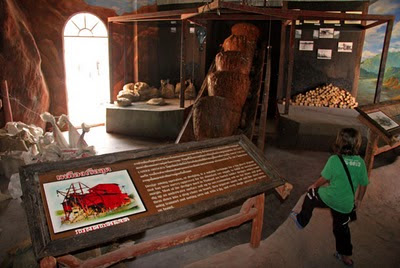 (above) My son looks at a display about tin dredging - bucket dredgers started operation in 1909 and operated for over 80 years. We then move on to a (not quite complete) display about tin processing where my daughter enjoyed looking at rocks under a microscope and my son enjoyed banging rocks with a hammer :) 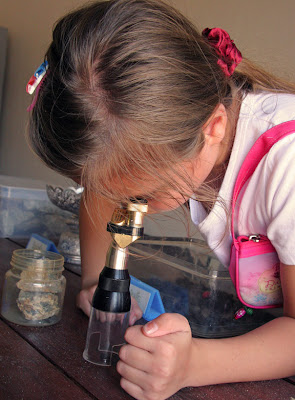 The museum building is done in that old style with a huge courtyard and rooms all around. Many of the rooms are as yet undeveloped, and we thought we were all done until the man appeared and the lights came on and we entered a new section built like old Phuket streets with shops and houses, a shadow puppet theater, a Chinese shrine... cool! 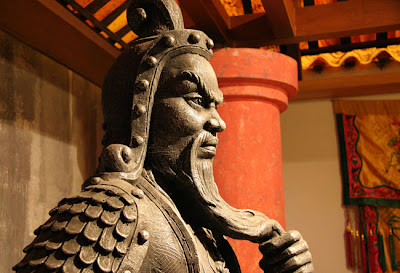 I think only because we were almost the only visitors were my kids allowed to play with the shadow puppets.. not sure they'd want each and every kid to mess about, but my 2 enjoyed it :) 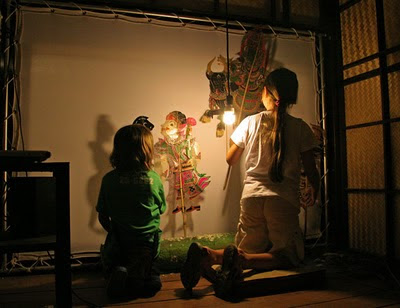 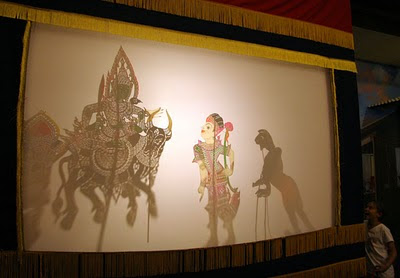 My daughter also enjoyed pretending to make clothes in an old Chinese house.. 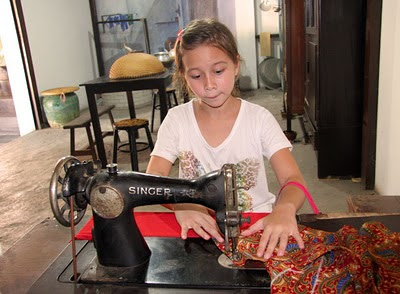 Again, once the museum is 100% open I don't think they'll want people touching everything, but exceptions were made here.. the old dude seemed to be the museum curator and he said it was fine for the kids to explore. I am happy they enjoyed the experience and they already want to go back. Good, I'll make nerds out of them yet. A bit of history, a bit of geology, a bit of engineering. A lot to see and learn at the Kathu Tin Mining Museum and looks like there will be plenty more once everything is finished. Still more to play with outside - an old Chinese style rickshaw. OK kids, I'll give you 20 Baht to pull me home.... 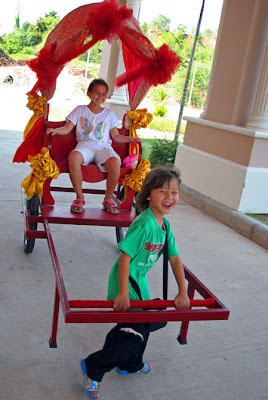 You have been reading : Kathu Tin Mining Museum