The vegetarian festival is underway, there have been a couple of the street processions in Phuket Town already, I have been eating the special Jae diet for 4 days now and driving home last night past the Phuket Brewery I was gagging for a beer.. but part of the festival is purification, cleaning the body.. so no beers until next week.

Would have uploaded a few photos earlier, but the Gremlins struck twice this week. Our wireless internet modem at home suddenly stopped working, and then.. as I was taking photos at Kathu village shrine on Saturday 17th October for the opening ceremony of the festival, my EOS 20D decided to **** up. I got some photos of the people as prayers were said, incense was burned and the Go Teng pole was blessed, and then just as I hoped to get some action shots of the pole being raised, I got "Error 99". Won't bore you with details... looks like a lens issue, so the lens will need fixing. Oddly, it was working just fine a couple of days later.. but can't be 100% trusted, so I have now been and bought a new 75-300 zoom which will see action at the weekend!

The opening action of the vegetarian festival is the raising of the Go Teng pole, a 20 meter high wooden pole - this happens at all the participating shrines. Later at night the gods are invited to descend the poles into the shrines. So here's some pictures around the shrine just before the pole was raised... 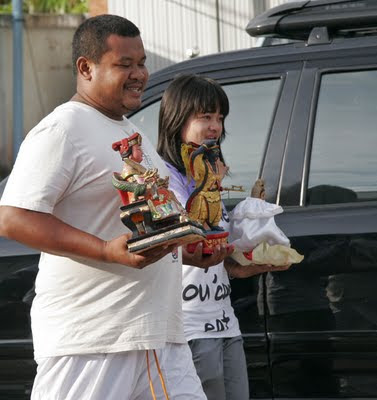 Images of the gods were being carried to the shrine as I arrived, and plenty of people were carrying large bunches of incense to say a prayer before the pole was raised. 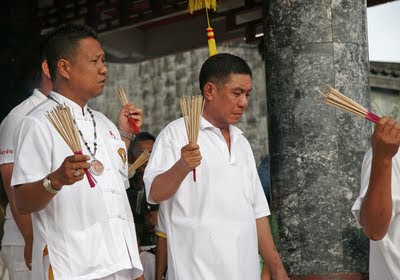 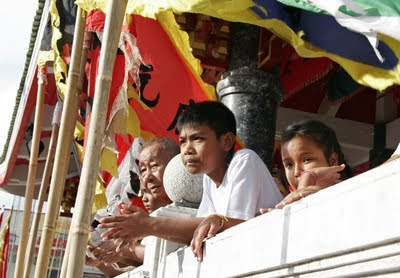 The Go Teng pole is rather large - it's attached to ropes, and a long line of people were waiting to pull while others were waiting to help push with long forked sticks. Meanwhile the pole was blessed with incense and sprinkled with water. 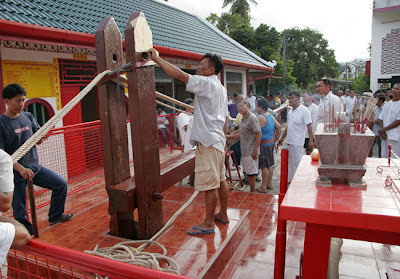 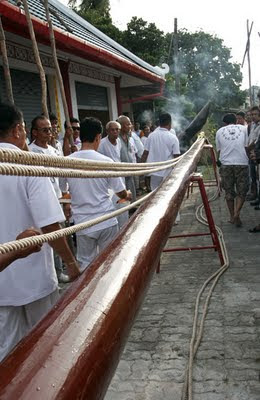 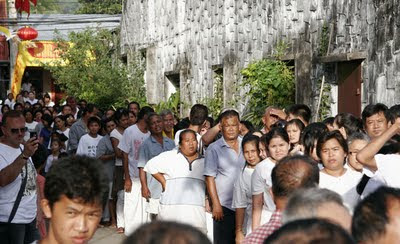 I imagine the guy below to be one the "village elders". He said a final prayer at the small shrine next to the pole before the pole was hoisted to the sky. It's a big piece of wood - took a while to get it fixed into place... It's held steady by a wooden peg and guy ropes attached to several points around the temple grounds. 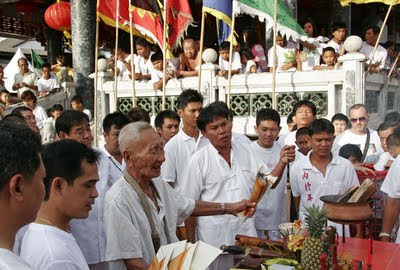 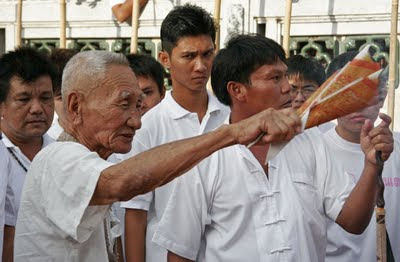 The festival is now in full swing - I will get to at least one of the street processions at the weekend, hopefully on Saturday (Jui Tui Shrine) and Sunday (Kathu Shrine). Been too busy this week to get to any of the early processions.

I took another walk in Kathu village and into the shrine with my daughter on Tuesday evening. This evening will take a walk in Phuket town near Jui Tui Shrine which is a very busy area compared to the relatively quiet Kathu. But since Kathu is our "local" it's convenient to head there to get some food and photos!

It was a rather drizzly evening on Tuesday as we headed to the village. Every year at festival time they erect a fancy entrance outside the municipality offices: 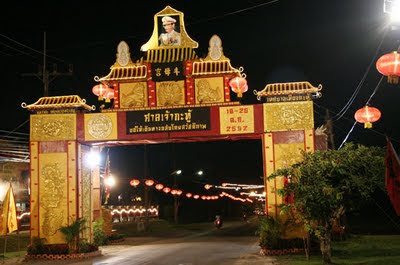 We just reached a little Phad Thai stall as the rain fell more heavily. Good place to stop - had a tin roof and tasty Phad Thai (vegetarian, of course). The owners little baby granddaughter kept her big dark eyes on the big foreigner... 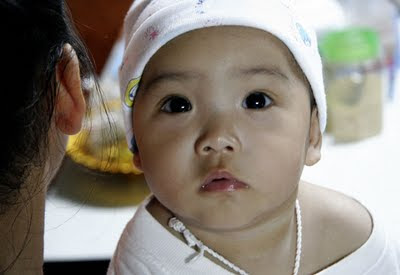 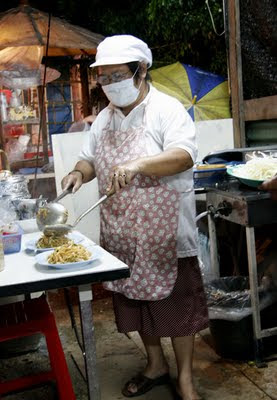 Next stop - fireworks. I promised to buy some for the kids. We spent about 100 Baht on various firecrackers, fountains, small rockets etc... Guess we'll get some more today! All the very best in cheap Chinese fireworks. I am careful not to let the kids too close, but they are a bargain. Rockets for 10 Baht! 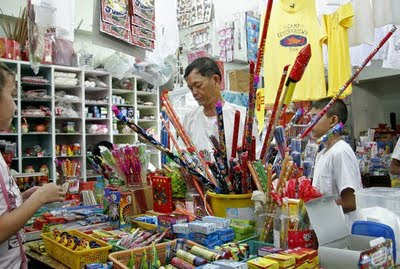 I find the Chinese shrines fascinating at this time of year. With firecrackers going off all night, everyone (almost) dressed in white, the incense and rituals, it's like another world. Plus for a week the whole area converges on the temple to sit and have a chat. All the old dudes sit on benches in the temple. All the kids throw firecrackers outside. And I love all the lanterns... 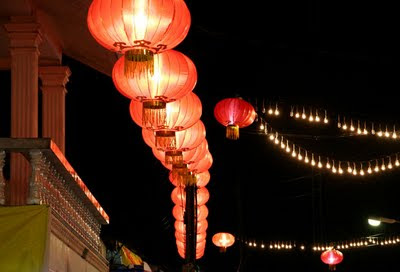 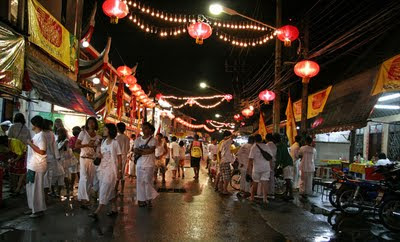 Candles and incense were still being lit and prayers being said next to the Go Teng pole... 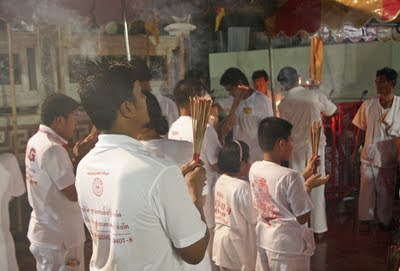 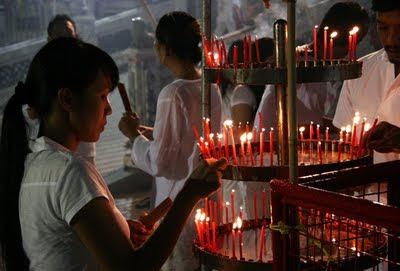 Also outside the shrine is the burner - a place where people burn prayer sheets and "money" which is to wish good luck in this life and the next. If anyone reading knows more about why people burn things and say a prayer do let me know! 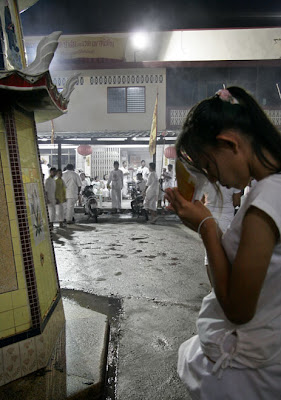 Inside the shrine, expect plenty of noise, banging drums, lots of smoke from the incense, if you are visiting try to keep out of the way of the locals who wish to pray. Oh and dress properly if you visit a shrine. It's not the beach. My daughter and I watched one of the Ma Song as he said prayers inside while kids banged away at drums and a black flag was waved around his body. It's in the shrine where the spirits of the gods are said to enter the bodies of the Ma Song. This guy (with no shirt, see photo below) seemed quite exhausted when he finally left the altar. It's all quite intense and is certainly no show. I mean, if it's a show, who's it for?! 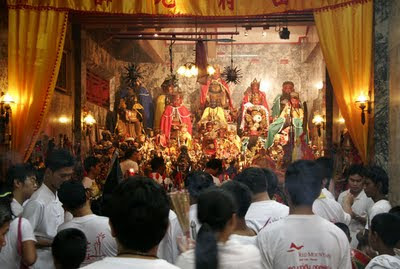 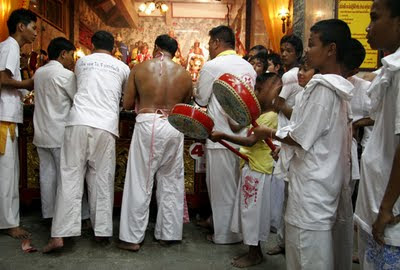 I hope to be at street processions on Saturday and Sunday, plus find time for some firewalking somewhere in the next few days. Work does get in the way, though! For now, here are some tasty spring rolls (vegetarian). 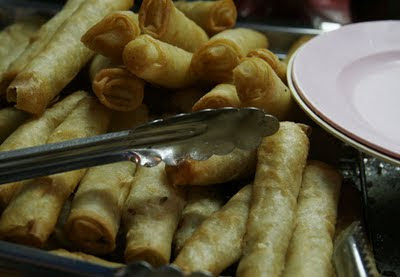 You have been reading : Some Photos from Kathu Shrine - Vegetarian Festival