It seems to have been a long time since I blogged a temple. I have a vague plan to blog all the Temples in Phuket, though it could take for ever. A lot of temples in a small area! Some are important, some serve small local communities, some are easy to find, some are hidden away. A couple of weeks ago I visited Sam Kong Temple (Wat Sam Kong) which is only a few km from my house and we've driven past the entrance hundreds of times.

Sam Kong (meaning 3 hills) is in the North East of Phuket Town. The area is an older part of town, and like Kathu just down the road was an important part of the tin mining industry in times past. Like Kathu, many of the locals in this area are Chinese Thais who came to Phuket during the tin mining boom in the 19th century. There is a Chinese Shrine close by too. The Sam Kong temple entrance is about 200m along the bypass road from the Tesco Lotus junction (officially called the Sam Kong junction) towards the main airport road. 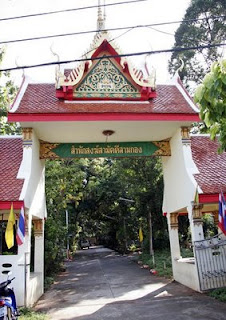 As usual for a small local temple, not much going on, just a few monks sweeping up leaves. The main building was locked up. A few dogs lazed around the grounds and then all dashed off at once to picked a fight with a visiting stray. 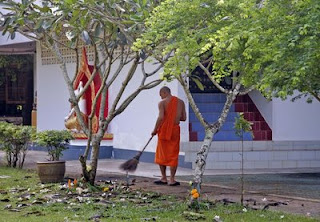 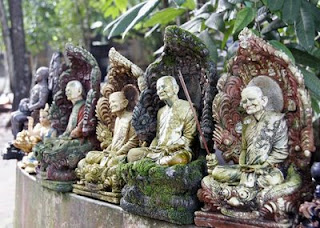 Not a big temple at all, but as always I felt that temple calm despite the 4 lane road a hundred meters away! Flowers had been placed around a tree. The monks had certainly kept the place leaf free. There was a nice lawn in front of the bell tower ("hor rakang" in Thai). 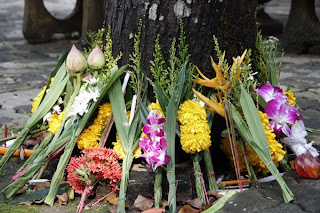 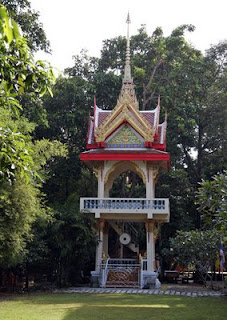 The day before I visited had been Asarnha Bucha Day, one of the most important Buddhist days remembering the first sermon of the Lord Buddha. A few people were still coming to receive blessings. One of the older monks decided to stop sweeping and have a chat. I think he wanted to practice his English. I asked if he'd been a monk all his life. No! He had never even served as a monk when he was younger. Been too busy getting an education. As far as I could make out he'd worked in the local government in a town in the north of Thailand and now was retired. After working all his life he said he needed some peace and so had come to Wat Sam Kong for 3 months. 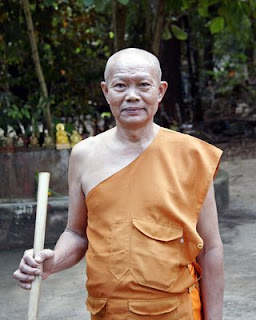 After a chat it was time to buy some new brooms from the broom man. Only 20 Baht each.. or maybe that was a temple discount? The temple at Sam Kong is near a busy road, a couple of hundred meters from a shopping mall, only a few miles down the road to Patong Beach. The quiet side of Phuket is never far away. 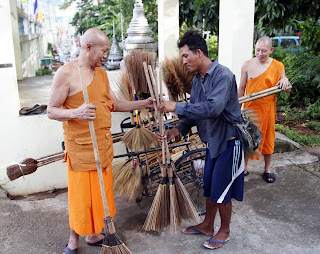 You have been reading : Wat Sam Kong Temple