Update 2014 - with the "big beach clean up" by the local authorities and army .. a lot of Nai Yang restaurants were torn down as they were officially built on national park land ... this was one of them. I need to explore Nai Yang again sometime to update properly. I think this one has been knocked down. Shame.

My parents have been visiting, and last weekend we took a trip up to Nai Yang Beach where I had been recommended a restaurant. On the way we stopped off at the Thalang National Museum, which is worth a quick visit if you are heading to the north of the island. At Nai Yang Beach I went to look for a guy who was running a Kite Surfing shop on the beach - he'd recommended a restaurant called Octopus.. but it was closed, and he was not in the kitesurf shop, so we wandered along the narrow road checking for other dining options.

Nai Yang is very quiet, there are fishermen coming and going - we watched a bucketload of squid being sorted out and we watched longtail boats coming in. Other fishermen (and women) waded out into the shallow water with fishing rods. 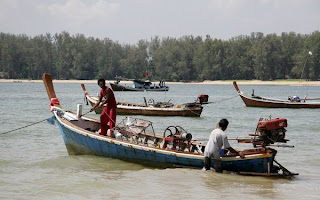 The traditional feel of Nai Yang is matched by the low key restaurants on the beach. Part of the beach is a National Park, so building is limited. We chose the very last restaurant along the dirt road, just before the treeline. It looked simple, the staff smiled, it was right on the beach and they had little shaded pagodas to sit in out of the midday sun. Reading this blog, you may see that I like small unpretentious restaurants, especially if they are on the beach and don't rip you off. So, I am happy to recommend Batik Seafood and I am sure we will go again. 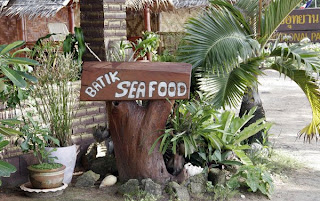 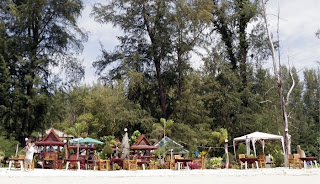 I felt relaxed as soon as we sat down. The kids could play in the sand near our table, we could sit in the shade. The food prices looked reasonable - we ordered a bunch of different dishes which were all around 90 Baht. The kids ate chicken with garlic on rice, one of their favourites - must have been good as they both polished off the whole plate. I was pleased to note that, although the Thai food was a little more expensive than some other places we like, the drink prices were very reasonable - a bottle of beer for 40 Baht in a beachside restaurant - a bargain! The food was all very tasty - green curry, beef and garlic, chicken satay. And the staff were friendly - the owner came to check that we were all fine - that's the kind of thing that makes me want to return to a restaurant, if the owner is friendly and involved in running the place. I like the personal atmosphere of a small restaurant like this one. 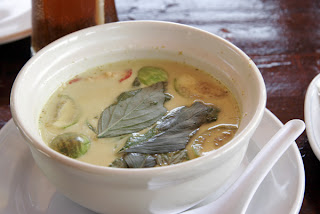 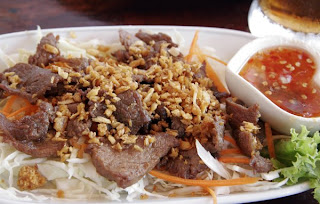 After eating, we all played on the beach for a while, drawing pictures in the sand, looking for shells and hermit crabs. If you think Phuket is crowded and over touristy, well, do read more of this blog. Nai Yang Beach is a million miles from Patong. It's all Phuket. If you want it quiet, Nai Yang and other beaches in the north of the island are for you. Having found another friendly beachfront restaurant, we will be back at Batik Seafood soon for sure! 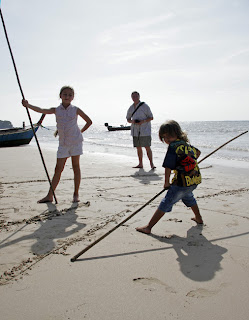 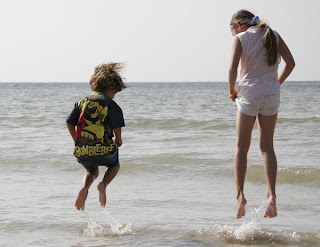