Update 2012 - Google Maps now has Phuket Street View. Try it! MapJack does not seem to have been updated since I wrote this in 2009.

I first heard of MapJack a couple of years ago, which was about when it started. It's very similar to Google Street View (available as part of Google Maps), which was launched about the same time. The idea with both - to map towns and cities with street view images. The MapJack images are taken by camera operators on foot or in vehicles. Every few meters, a new 360 degree image. Every street, every building.... put it all together and you can "walk" around your own town, or places you have been or want to visit. It's still in its infancy of course, covering some US cities (MapJack started with San Francisco) and (for reasons I am not clear about) quite a lot of places in Thailand too. Chiang Mai was added first and now... Phuket!

Google Maps has a lot more coverage - loads of cities in the US and Europe, but MapJack, which claims to be run on a shoestring budget, is doing Thailand. Hurrah! I think the Phuket images are about a year old... the problem with a project like this is keeping images updated, especially in a place like Phuket where there's building a plenty, new roads etc... Things look very different to 10 years ago when I arrived. Google Earth is another great tool, but some of the images of Phuket are over 5 years old now, though are updated now and then

Not sure if it's the same for everyone, but I get defaulted to a start image at Kalim beach, just north of Patong. Here's the screenshot: 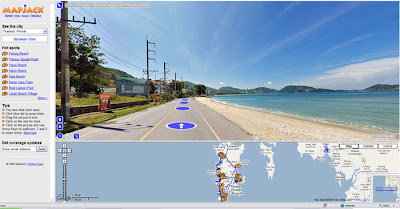 MapJack is easy to use, you can click on the blue dots to move to the next picture, you can click and drag the picture to spin round 360 degrees, or use the arrow keys to move forward/back/turn. Below the photo is a Google Maps overlay. Best to zoom in a bit to see which areas have MapJack coverage - you can click on the map to move "Jack" to that location. There are a few major Phuket roads missing in the coverage so far, but you can pretty much cruise the whole island and waste entire days at work. Here's a screenshot showing a view from Phromthep Cape:

Each image actually has it's own url (web address) - in the top left of the image you see a little arrow pointing to a circle - click that and you will get a message saying "Link to this location:" followed by the url - for the image above you can click on http://www.mapjack.com/?5R2vTCpvWcgA - and you can then rotate the image to see exactly the same as above.

Here's a screenshot in Phuket Town showing the On On Hotel:

Now, so far.. aside from the fact that some images in the seedier areas of Pattaya were removed, there has been no call for face blurring and licence plate blurring like in Google Street View. I have yet to find myself or anyone I know on MapJack, but I guess I need to waste more hours looking at the images! You might find yourself on there! What you also get in these images is a snapshot of daily life and if you click on different areas in Phuket - a good appreciation that Phuket has a lot of variety, it's not all beaches and tourists!

This is Phuket (Soi Bangla, Patong): 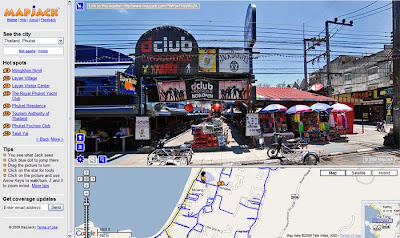 So is this (a small local market north of Phuket Town): 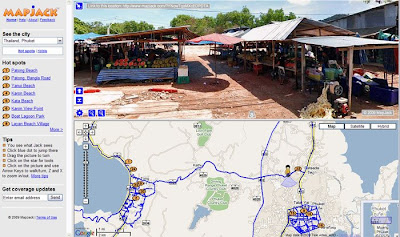 Darn, I could do this all day! You can explore all over Phuket with MapJack - main beaches, quiet side streets in Phuket Town, main roads, minor roads - sure, not every road, but anyway, I have been enjoying playing with this all week - thanks to Alasdair at Phuket Observer for the heads up! MapJack is a bit of fun for me, but a great tool for getting a feel for Phuket and finding places you might want to visit.


You have been reading : MapJack - Phuket Street View - Almost like being here!