Back in England I used to listen a lot to the radio. My favourite shows were hosted by the late great John Peel, and by "Whispering" Bob Harris, along with a blues show hosted by Paul Jones on Radio 2. I also liked Mark and Lard in the mornings on Radio 1.. good for listening on a drive to work. Yeh, I used to be a radio fan. Indeed (little known factoid) back in 1988/89 I even hosted a 2 hour Saturday evening show from 6 - 8pm for about a year on U.R.Y (University Radio York).

Anyway.. enough about the old days! I will admit that I have been very much a CD person for the last 20 years. I listen to the music I choose. My computer has 11,000 tracks to choose from. Radio? Pah!

But last week I received an email that made me turn the radio on again. Yes, good marketing! There are quite a lot of radio stations you can listen to in Phuket, but largely for local people rather than foreigners or local foreign residents.. of which there are rather a lot in Phuket. So, the email from Phuket 91.5 FM had some effect - a new website, live streaming so you can listen online.. well, I had to click! And turned on the radio on the way home (I drive about 25 minutes each way). Rather oddly, the first song I heard in the car was Always look on the bright side of life.. from Monty Pythons Life of Brian. You know... If life seems jolly rotten, there's something you've forgotten - and that's to laugh and smile and dance and sing!

So I have tuned my car radio to 91.5 now. Yeh, some music is not my style, but in the last few days I have heard old rock, Thai rock, jazz, dodgy old pop songs, makes a change from my CD collection! You can click on the banner above to open a "mini player" and listen online to Phuket 91.5 FM

I contacted the radio station as I was interested to have a look around their studio, which is located in Patong on the "back back" road winding along the hillside, officially called Hasip Pee Road. Good views over Patong from up there. 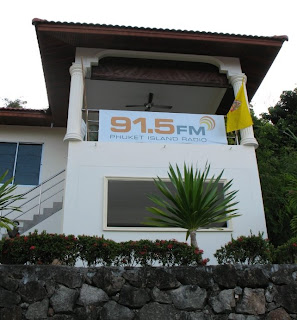 One of the owners met me. The studio tour was fairly rapid - this is not the BBC! The main broadcast studio was a computer and one control panel. Changed a bit since my days as a DJ - we had faders and turntables and tape decks and CD players - now it's all done by computers! 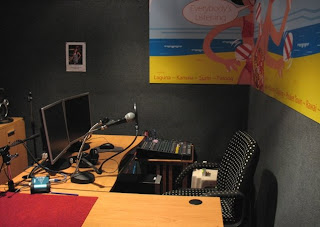 The station has only been running for about 9 months, and they are aware of the need to expand the music library - I was assured a major expansion is coming soon. Also, more live shows are coming soon - at the moment there is a lot of computerised broadcasting. I visited on Sunday morning.. but right now there is no breakfast show. The studio was empty, but broadcasting nonetheless! They also have a small production studio for making ads and voiceovers and promotional videos. Even though it's new, 91.5FM is "the" radio station for Phuket. Have a listen right now!