Another small, quiet beach in Phuket, not very well known and mainly only visited by locals is Laem Ka beach. It's just north east of Rawai beach, between Rawai and Chalong and is not well signposted at all. We had never been there before today despite countless drives around the Rawai area. We first started to drive up the road to the Evason resort, but this only goes to the hotel. The friendly security guard told us to carry on towards Rawai and turn left after the 7-11. There's no big sign to Laem Ka beach, as it is undeveloped and basically off the tourist radar.

Its a small road which goes across the headland (the word Laem in Thai means Cape or headland) - very nice area full of coconut trees, but is mostly private land. Owned by who? Whoever it is has put up a rather odd scarecrow at one point to make it quite obvious that you do NOT want to go this way: 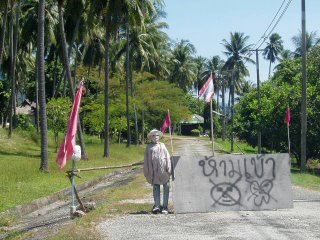 Just above Laem Ka beach is a small parking area, and one small building selling some drinks and BBQ pork with sticky rice. You have to go down a few steps to the beach which has some sandy areas separated by rocks and stretches for about 400m I would guess. There were only a few people there, so we found ourselves a little private beach! 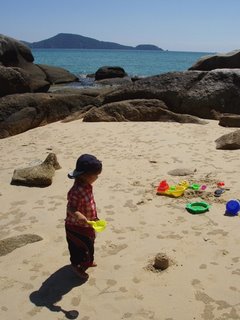 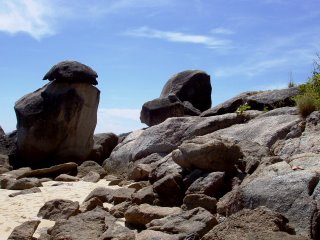 There are views across the water (which looked nice and clear) to some of the islands just offshore - Koh Bon, Koh Lone, Koh He, and there were sailing boats out on the sea racing from Chalong. Maybe practicing for the well known Kings Cup which starts next weekend. 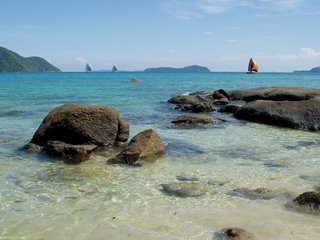 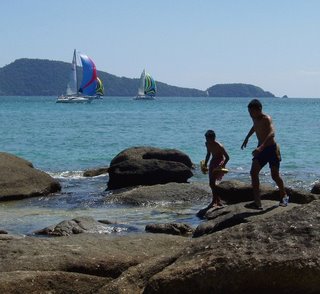 We had come for a quick look but had a paddle and let the kids play with the sand and splash around. It was very nice indeed and I think we'll go back next weekend with a picnic and more suitable swimwear for all of us! It's peak season and all the main beaches are busy, but here we had all the time in the world, the sun on our shoulders and great views. 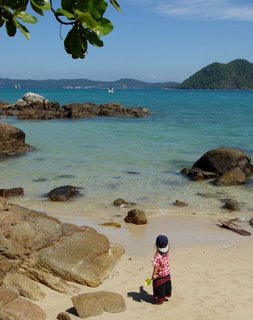 Update 2012 - I hear that the Laem Ka Seafood restaurant is operational now, we might have to go take a look sometime!

Update 2016 - I have written a new post about Laem Ka Beach.


You have been reading : Quiet Beaches - Laem Ka Beach