I can't believe we never found this place before. We have driven many times around the Cape Phromthep / Rawai Beach area, and it's a great part of Phuket to explore, but somehow we missed this one... We found a great viewpoint at a Buddhist Meditation centre/temple between Rawai and Phromthep, with a lovely view of Cape Phromthep from the south and also looking across the sea to Koh Kaew Yai, a small island with a golden Buddha statue on the shore. The water looked clear, and we spotted a small private beach close to the cape that you would probably need a boat to reach. 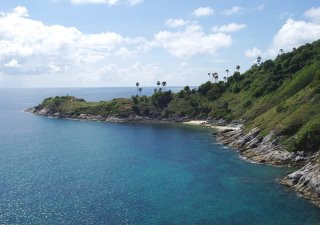 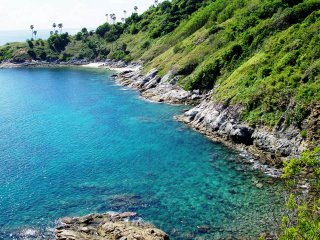 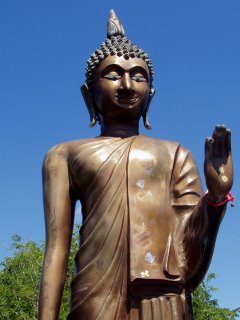 We were following the back road through the west of Rawai and saw a sign saying (in Thai) "Samnagsong (or Samnaksong) Phromthep", which means "Phromthep Meditation Centre". It's a dirt road and I was a little concerned to take our car down there (it's not a fancy 4X4 you know), but it was fine, and only a couple of hundred meters long...we parked next to what looks like a small temple. There is a Buddha statue facing out to sea and a large elevated platform which I assume is for the aforementioned meditation.

The view is gorgeous. We all sat for a while on a small wooden platform looking out at the ocean, at the south side of Cape Phromthep and the island of Koh Kaew Yai, which is accessible by boat from Rawai. If you're in this area, try to find it! 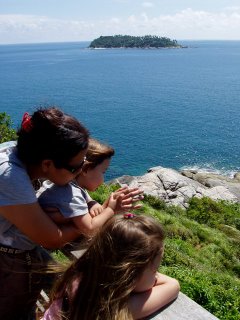 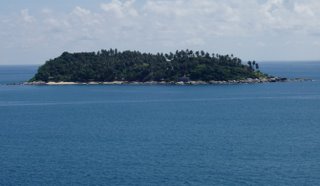 We went back for a look at the view with my mother, the view is still great, and all was fine until we stopped to say a little prayer in the temple. We dropped some money in the donation box and this elderly Monk (see photo) started talking to my wife about all the people who had donated for helping to build a new building on the site. Indeed he had a book with names of people who had donated. My wife told him we'd already left a small donation thank you very much, have a nice day. As we started to leave he started ranting about if we don't want to donate 1000 Baht we can p1ss off and never come back..not very good behaviour for a monk, is it? My wife says she has never heard a monk talk like that before. I'd say it is rather likely that we will follow his advice and not return. What is the world coming to? You may expect tailors or massage girls to harrass you in Patong, but old monks in a temple?


You have been reading : A fantastic view from Phromthep Meditation Centre