Military Coup in Bangkok? All Quiet in Phuket.

Update 25th May 2014 - please note - this is an old blog post relating to the coup of September 19th 2006. Nothing happened in Phuket then and since the coup in 2014, nothing is happening in Phuket again. Yeh, there was a curfew for a while but you won't see troops or any trouble in Phuket. For news, suggest you follow me on Twitter @ twitter.com/jamiemonk. I notice that quite a few people have been looking at this old page, so I just want to say .. everything in Phuket is fine. See you on Twitter and see you here!

20 September 2006 : Well, I have just come to the office and can see nothing abnormal here in Phuket. No military, no increased police presence, no worried faces. Thailand is very relaxed. Hard to work out last night what was going on. All the Thai TV channels went off the air and started playing music and showing pictures of the King. We got pictures from the BBC News (www.bbc.co.uk) showing soliders and military vehicles in the streets of Bangkok, but otherwise everything going on as normal. Called my wifes sister who works for a bank in Bangkok and she said she could see nothing at all.

So let's wait and see. Looks like Thaksin may be out of a job. The statement issued on Thai TV said the military were acting on behalf of the King, or at least with his approval, which makes all the difference here in Thailand.

As I say, no reason to worry, and nothing going on here in Phuket except schools and banks will be closed today. (Today is the last day of the school term anyway).

(Later) - Thai TV is back on, and there was a statement issued by the leaders of the military and police saying they are only trying to help and do not intend holding power any longer than necessary. 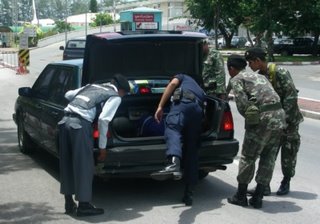 Nothing happening in Phuket, everything is 100% normal. Sun is shining. The news says that the King supports the leaders of the coup, which means (since everyone is loyal to the king) that there will be no trouble.

BBC News says "During the day, coup supporters brought flowers, pizzas and donuts to the soldiers and took turns taking family pictures in front of the armoured vehicles which have cordoned off the government district.

Many of the tanks that have been deployed in Bangkok have yellow ribbons tied around their barrels to signify loyalty to the king."

Have a good day!
Jamie


You have been reading : Military Coup in Bangkok? All Quiet in Phuket.