Update - I have a newer post on the blog about Monkey Hill - see A walk up Monkey Hill in Phuket Town. 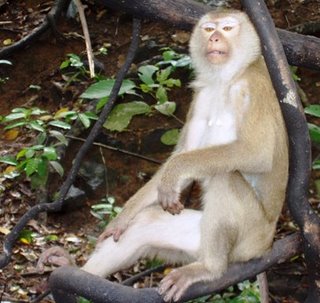 We do like hills, and will head for this one again. For some reason, despite seeing this hill every day, we have never taken the time to explore. You can't miss this hill, it's the big one with lots of TV masts and aerials on the top (see photo below) - the tallest hill in the vicinity of Phuket Town (now officially called Phuket City, by the way). We have been up the smaller Khao Rang many times, from where you get some nice views, and we also like driving up "Radar Hill" (with the big radar dome on top - see here) and "Buddha Mountain" (see here for information). I always thought there was not much up Khao To Sae except the aerials. Wrong!

We saw an article in a local Thai language magazine showing the hill and talking about the monkeys that live there. So, with something worth seeing, we decided to check it out....The road up is located in the NE of Phuket City. You can drive right to the top, or stop at the bottom, or half way up where there is a temple (see photos below). In the late afternoon, many local people are walking up the hill, getting some good exercise on the steep road - made us sweat, I can tell you. Look out for dogs as there are lots of manky looking strays up here. 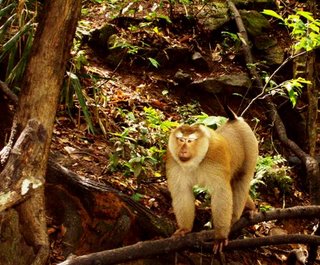 Some of the views are nice from the road, though it is mostly in the trees. The monkeys are near the very top. We saw a big male first and then suddenly a troop of maybe 40 individuals swinging in the trees by the road. These included some really tiny babies clinging to their mothers, some slightly older ones play fighting, a bunch of gossiping females and several large males. They were just hanging out, but then along came a man and his daughter on a motorbike, with a basket full of fruit. He said they regularly go up and feed the monkeys as do several other people. We also saw a woman heading up with food for the dogs. The monkeys went bananas for the bananas, and so we got really close to them. I wouldn't want to get too close to the big ones. My dad got out to try and get some close ups of babies - I am sure he'll send us some pictures soon. We stayed in the car and I convinced my daughter not to throw Pringles out the window for them. We were surprised to see so many monkeys there, and I am sure we'll drive up again soon. Another little surprise - Phuket is full of these out of the way places. Despite the rampant tourism, it is easy to get off the beaten track, and these are the places we like to find. 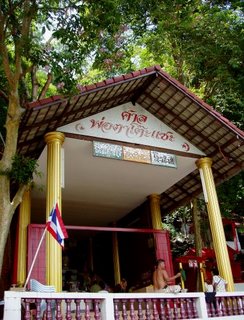 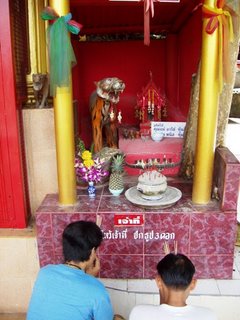 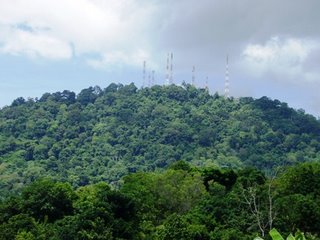 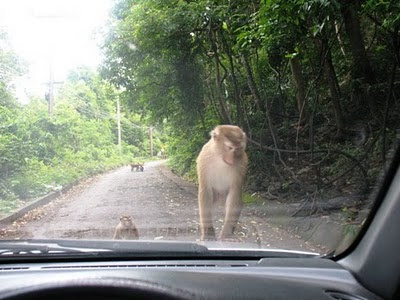 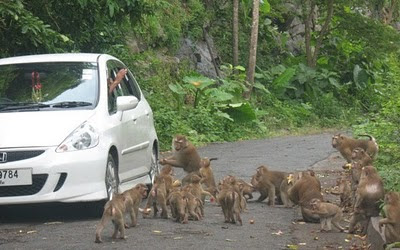 You have been reading : Monkey Hill, Phuket (Khao To Sae)