This post is an old one from 2006 - I have written several more times about the Big Buddha - most recently in 2013 : Big Buddha Phuket. 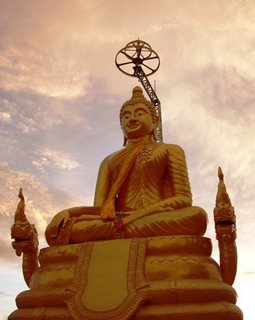 One of the first places we took my parents on their recent 3 week trip was "Buddha Mountain". On the top of Nakkerd Hill (Khao Nakkerd) a huge Buddha statue is being built. It will be some 45m high and visible from miles away. At this point, after much wrangling over money and building rights, construction is going ahead, and the top of the hill is currently a building site. Much of the enormous base is complete, and a small (12m) replica is already shining gold in the sun.

The views from the hill are great, and its worth a drive. The road to the Buddha Mountain is between Wat Chalong and Chalong Circle (Ha Yaek Chalong), and is very obviously signposted. The road up is about 6km. The last 3km is dirt and can be rather poor after rain. I imagine the whole road will eventually be surfaced. Very few people get up there. We have been 4 times recently and only seen a few other visitors. Last time we wrote our names on bricks that will be part of the base. There are some monks and nuns living there at a makeshift temple and they have a few things for sale. When (eventually) it is complete, this will be quite an amazing spectacle to be sure. The Mingmongkol Buddha project has an official web site (with rather bad English):

Here's some of the views... 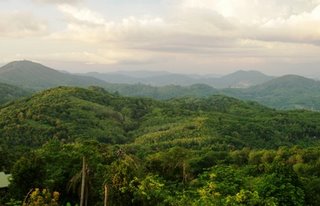 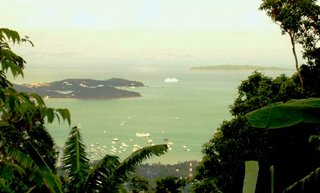 
You have been reading : Buddha Mountain, Phuket