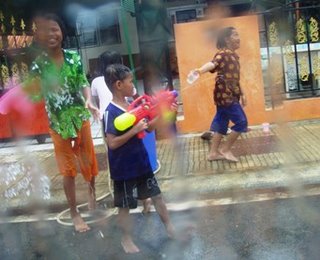 Songkran is marked by the water based festivities, which traditionally were limited to sprinking some water on the head of your elders, or going to the temple for a blessing and sprinkle from a Monk. These days, water fights are the order of the day, though the temple is still important (see photos below). Just about anywhere you go, there are people lined up along the street ready with buckets of water and huge water pistols to drench anyone passing by. It can be great fun if you are in the mood. It can also be dangerous, as some folks get carried away with the occasion and fire water at passing motorbikes. People also tend to drink plenty of alcohol, and Songkran is well know for its high accident statistics, depsite police crackdowns, roadblocks etc.. 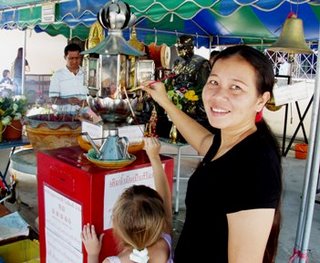 Our family was not into the water fights really, though later I met a friend who has a pick up truck and next year (Songkran 2007) I think we will drive around with barrels of water in the back and get soaked (wet and drunk). This is a common sight, as the people in the pick ups battle those on the ground! This year we had some family water fights in the garden. My daughter used the garden hose, rather out matching me for fire power.

We went to a new temple near Chalong for prayers and to give offerings (food, flowers, incence) to the Monks. The prayer was short, led by 2 monks and a young novice nun. The amount of food there would have fed a small army. Poor people often eat at temples - but must wait for the Monks to eat first. There were some people waiting outside to eat. If you're a backpacker on a really tight budget, remember the free temple food! Nobody is turned away.

More Songkran on the blog ...

More photos below of the watery fun and the temple...come to Phuket for Songkran! 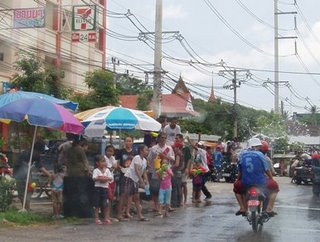 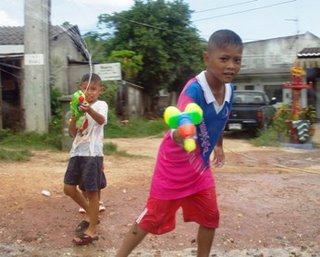 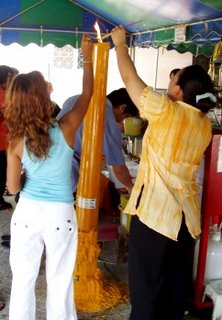 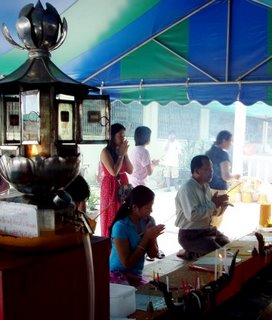 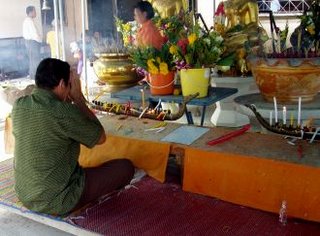 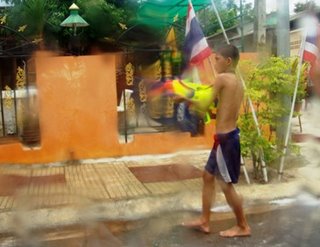 Come and celebrate Songkran in Phuket next year!